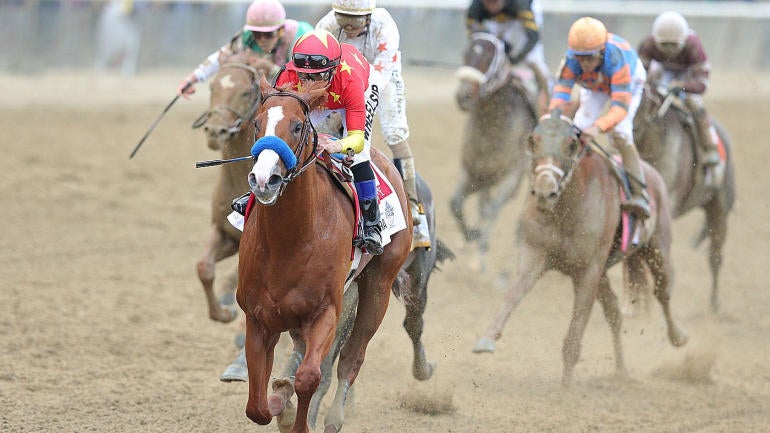 No U.S. race this year will have more money on the line than the 2019 Pegasus World Cup. It’s the richest race in the country, and it goes to post on Saturday at 5:40 p.m. ET from Gulfstream Park in South Florida. Accordingly, Pegasus World Cup contenders from horse racing’s elite will be on-hand. D. Wayne Lukas, who has won 14 Triple Crown races, will bring Bravazo to Gulfstream Park. The John Sadler-trained Accelerate will run from the No. 5 post and is the 9-5 morning line favorite in the latest 2019 Pegasus World Cup odds. Todd Pletcher trained Audible, who won the Florida Derby at Gulfstream Park last year, while Michael McCarthy, Pletcher’s former assistant, has the second-biggest favorite in the race, City of Light (5-2). Before laying any 2019 Pegasus World Cup picks of your own, you’ll definitely want to see what legendary horse racing expert Hammerin’ Hank Goldberg has to say.

If you put $50 on Goldberg’s Preakness picks last year, you would have won over $11,000. You would also be rolling in it if you followed his picks for the Arlington Million in August, as he nailed his exacta by fading the favorite to a huge payout. He also picked a 39-1 horse to show in the Secretariat Stakes, and that one paid off too.

Goldberg was dead-on throughout 2018, including at last year’s Pegasus World Cup. He not only called for Gunner Runner to win, he also hit his exacta with West Coast taking second. He even nailed the Pick 5 at Gulfstream Park that day. “I was cashing all day,” he told SportsLine.

That was the start of a fantastic year for Goldberg, who also cleaned up at the Haskell Invitational at Monmouth Park, as he nailed the top four horses in order, winning his exacta, trifecta and superfecta. He even won the Pick 4 at Monmouth that weekend. In mid-August, he confidently picked Accelerate to take the Pacific Classic. The result: Accelerate won by more than 12 lengths.

The reason Goldberg has been so successful: He goes straight to the source. In the 2017 Preakness, for example, he chatted up Chad Brown, the trainer for Cloud Computing, before the race. “He was training off the charts, was Chad’s top horse all year, and had a tough trip in the Wood Memorial,” Goldberg said. “Brown skipped him for the Kentucky Derby, rested him, and trained him up for the Preakness.”

When Goldberg learned Javier Castellano was getting off Gunnevera to ride Cloud Computing, the Hammer pounced on the 14-1 long shot to win and put him on top of his exacta, trifecta and superfecta bets. Cloud Computing, of course, surged late and beat Classic Empire in one of the most thrilling Triple Crown races ever. Senior Investment — a 30-1 long shot on the Preakness odds board Goldberg liked nearly as much — finished third, giving the Hammer and his followers monster payouts.

Now that the 2019 Pegasus World Cup lineup is set, Goldberg is releasing his picks, predictions and exotic bets over at SportsLine.

We can tell you that Goldberg is not high on Seeking the Soul, a 12-1 darkhorse who has been gaining steam in some circles ahead of Saturday’s Pegasus World Cup post time.

The Dallas Stewart-trained Seeking the Soul will have Hall of Fame jockey John Velazquez riding. But Goldberg points to a lack of overall success against elite competition as a reason not to consider Seeking the Soul as his top sleeper candidate. “The thing I don’t like about him is all of his good stakes races have been at Churchill Downs,” Goldberg told SportsLne.

Away from Churchill recently, Seeking the Soul finished 13th in the Woodward Stakes at Saratoga and was fifth in last year’s Pegasus World Cup. The colt was also second in the Michael G. Schaefer Memorial at Indiana Downs last July.

Instead, Goldberg is very high on a long shot that has all the tools to put together a complete run at the Pegasus World Cup 2019. Anyone who follows Goldberg’s advice could hit it big.