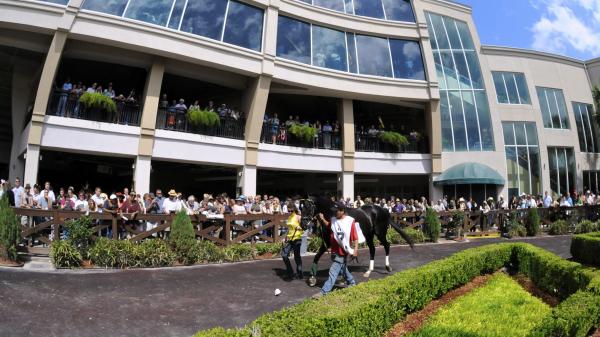 The Lecomte Stakes is primarily known as a prep race for Kentucky Derby hopefuls. Yet if a horse in Saturday’s race catches your eye, do not restrict your future focus to the first Saturday in May. While no horse has won both the Lecomte and the Kentucky Derby presented by Woodford Reserve, two winners of the Fair Grounds stakes since 2013 have advanced to capture the Preakness, including last year’s winner of the middle jewel of the Triple Crown, War of Will. Keep that in mind once spring rolls around.

1. Finnick the Fierce: Created quite a stir in the Grade 2 Kentucky Jockey Club when he rallied to finish second at 87-1. This will be his first start since that Nov. 30 stakes, which was contested over a sloppy track. If the track is fast Saturday, this should answer some questions about whether he’s a rapidly improving runner or if he benefitted from a wet track. He’s put in a pair of bullet works for this race, so ignore him at your own risk.

2. Mr. Monomoy: You no doubt know his half-sister, Monomoy Girl, the champion 3-year-old filly of 2018. Now you’ll get to know her 3-year-old kin who makes his stakes debut Saturday. He was quite impressive in breaking his maiden at Churchill Downs, but then lost by a head at Fair Grounds over a sloppy track to fellow Lecomte starter Lynn’s Map in an allowance race. That was his first start around two turns, and that experience should pay a dividend in Saturday’s race at the same 1 1/16-mile distance.

3. Perfect Star: The distance should not present a problem as he’s won at a mile and 1 1/16 miles already in a four-race career. The catch is that those two wins came on turf and he was sixth in his lone dirt race, which came in his career debut. That race was at six furlongs so maybe the stretchout to two turns will help.

4. Scabbard: He didn’t fire in the Breeders’ Cup Juvenile, but the same can be said of a quite a few quality horses in other races who struggled on a deep, tiring surface at Santa Anita. Prior to that, his form was solid with a pair of runner-up finishes in graded stakes. He should benefit from the two months off and turn in a nice effort here, unless his fourth-place finish had more to do with declining form than the racetrack.

5. Excession: He was third, almost three lengths behind Lynn’s Map and Mr. Monomoy in the allowance race, and, judging by a maiden win on a wet track, he probably appreciated the sloppy going. Have a feeling the other two are better so we’re only lukewarm on his chances here, even with Asmussen handling him.

6. New Eagle: He set the pace in the Kentucky Jockey Club and was still ahead in mid-stretch before he faded to fifth. Like his works since then and would not be surprised to see him turn in a better performance.

7. Halo Again: He’s undefeated with wins in a stakes on synthetics and a maiden race on dirt.  It’s a hard read because of the two different surfaces, but he was a decisive winner on the dirt for a top stable and could be an interesting possibility if the odds are right.

8. Jack the Umpire: He’s raced four times, with three wins and a 30-length loss in a Monmouth stakes. We’re willing to draw a line through the loss in the one-mile Sapling, so the question is whether his other efforts are good enough to make him competitive here. His speed figures are on the weak side so we’ll look elsewhere for a winner.

9. Silver State: One of three Asmussen starters, he’s coming off a game effort in which he lost by a nose on a sloppy track at Churchill Downs. He’s a fighter, as he finished in a dead-heat for first in his debut, and he should be well-suited for two turns. He also gets Asmussen’s main rider, Ricardo Santana, which is a positive sign.

10. Enforceable: Rallied for fourth in the Kentucky Jockey Club and was narrowly beaten for second in the Breeders’ Futurity. He broke his maiden around two turns and should be a serious stretch threat if he can work out a clean trip from post 10. Trainer Mark Casse won this race last year with War of Will, so this son of Tapit merits considerable respect.

11. Bango: Has a win, two seconds and a third in his last four starts, but that consistency will be tested here as he races beyond seven furlongs for the first time and he should be forced to race wide from post 11. He also finished nearly 10 lengths behind Silver State in a maiden race, which lessens his appeal.

12. Shashashakemeup: Another sprinter attempting a stretchout. He was a sharp maiden winner at Churchill Downs but then came up empty on a sloppy track while racing wide in a six-furlong stakes at Fair Grounds. He has the breeding to handle two turns, but the post is a big drawback.

13. Sycamore Run: He looked quite good in a front-running debut win at Fair Grounds, again over a sloppy track. His works since then have been stellar and he just might have enough early speed to get to the front and save some ground around the first turn. His pedigree indicates he’s worth a gamble around two turns.

14. Lynn’s Map: On paper, he’s a major factor, having beaten Mr. Monomoy and Excession in his last start. The problem is the post and the probability that he’ll be forced to race wide. Unless his odds drift up, it’s tough to back him given all of the obstacles he’ll face.