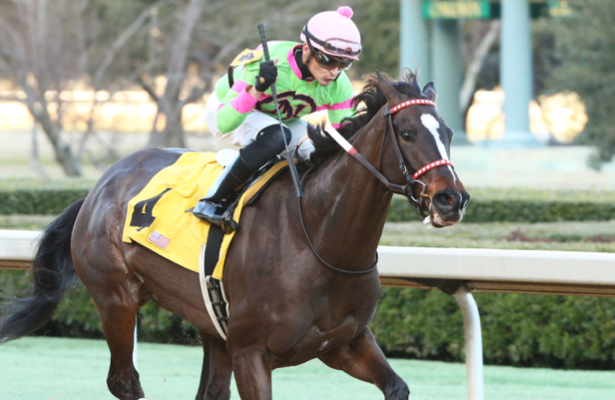 After watching Amy’s Challenge set a stakes record in Saturday’s $100,000 American Beauty Stakes at Oaklawn Park, trainer Mac Robertson was plotting his next move for the filly by the next morning.

Amy’s Challenge had three bullet workouts at Oaklawn leading up to the American Beauty, which marked her first start since a sixth-place finish in the $250,000 Raven Run Stakes (G2) at 7 furlongs Oct. 20 at Keeneland.

Robertson said at the moment, “it looks like” Amy’s Challenge will remain around one turn and be pointed for the $100,000 Spring Fever Stakes at 5 ½ furlongs March 2 at Oaklawn.

Amy’s Challenge began her 3-year-old campaign with a narrow victory in Oaklawn’s $125,000 Dixie Belle Stakes before stretching out to finish second in the $200,000 Honeybee Stakes (G3) and third in the $400,000 Fantasy Stakes (G3) later in the meeting.

“She ran so hard that first race last year,” Robertson said. “It took a lot out of her. When you’re a 3-year-old and chasing horses a little better than her and little farther than she wanted to run last year, it wasn’t ideal.”

Saturday’s victory was the fifth in nine starts for Amy’s Challenge and bumped her earnings to $299,159. She is a three-time stakes winner for Novogratz Racing Stables Inc. (Joseph Novogratz) and unbeaten in three 6-furlong races.