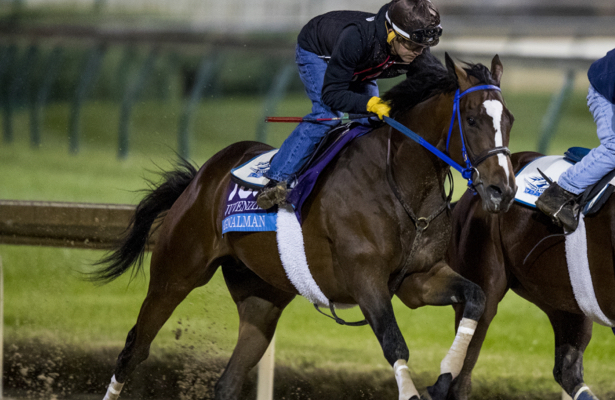 While there were no stakes races over the weekend designed to give 2019 Kentucky Derby prospects opportunities to improve their credentials for America’s most famous race, I couldn’t ignore a playable renewal of the Buena Vista Stakes (G2), a turf event at Santa Anita Park that offered a pretty profitable exacta opportunity.

That one-mile race for fillies and mares was ripe for a straightforward play that focused on the likely favorite Vasilika, who won the race for fun coming from off the pace. And, as I read the past performances, one of the race’s most intriguing longshots, Streak of Luck, did finish second to complete a realistic 1-2 play.

Anyhow: Moving forward, we are about to see the purses of Derby prep stakes significantly increase, along with their significance in qualifying points payouts.

Saturday at Gulfstream Park, we’ll have the Fountain of Youth (G1) stakes at 1 1/16 miles. With potential favorite Maximus Mischief out of the race having not performed well enough in his final workout, I believe that trainer Dale Romans has Everfast ready for a good try at high odds off his runner-up in the Holy Bull (G2) at 128-1.

But when push comes to shove, I expect trainer Kenny McPeek will have Signalman quite fit off the layoff, and we should get somewhat of a price. I will use Signalman in my exotic plays as well as a prominent key in any double or Pick 3.

The following weekend, on March 9 at Tampa Bay Downs, the Derby trail continues in Florida. Recent allowance winner Dream Maker has continued to look good as he prepares for this big step up in the Tampa Bay Derby (G1).

On the same day, Santa Anita will host the San Felipe Stakes (G2), and there, I’m looking to Bob Baffert-trained Improbable having a very real shot at upsetting the reigning champ Game Winner.

Also that afternoon, Aqueduct hosts the Gotham Stakes (G3). I’ll await further clarity on the field for this, as well as Turfway Park’s Jeff Ruby Steaks (G3), before drawing conclusions.

On March 16, Oaklawn Park will push the Derby prep race purses up to $1 million as it offers the 1 1/16-mile Rebel Stakes (G2). If he receives another chance, watch the Todd Pletcher-trained Cutting Humor here, or wherever he next runs, as the Southwest (G3) favorite had his share of trouble last out.

On March 23, New Orleans’ Fair Grounds will run the Louisiana Derby (G2) while upping the distance to nine furlongs. While the field is unsettled, I’m liking the long-range potential of Country House, who could return after running a clear second to War of Will in the Risen Star (G2).

The very next day, Sunland Park in New Mexico will jump into the Derby prep picture with the Sunland Derby (G3). The field is unknown, and it will be interesting to see which shippers take their shot at these points and most of an $800,000 purse.

On March 30, Dubai will capture attention of Derby trail types with the $2 million UAE Derby (G2) at a unique distance for a prep, 1 3/16 miles. Later in the day, some Fountain of Youth runners — along with runners skipping that race to train up to the larger spot — will return in the Florida Derby (G1).

Into April, among a number of vital Derby preps — they’re too far out to predict who will run as of yet — are the Wood Memorial (G2), Santa Anita Derby (G1), Blue Grass Stakes (G2) and Arkansas Derby (G1).

While the promising Signalman may go on to the Florida Derby or Blue Grass Stakes, back home at McPeek’s Kentucky base, I do like him more immediately in the Fountain of Youth. If this is where McPeek sends the colt for his Derby credential, we should trust that judgment and evaluate him accordingly.

Moving forward, I anticipate evaluating the performances of every 3-year-old who competes in the aforementioned races. There are plenty of points to earn beginning in the Fountain of Youth with War of Will (60 points), Game Winner (30) and Country House (20) the current leaders.

Steve Davidowitz has written many books on handicapping, including the classic, “Betting Thoroughbreds.” His Across the Board columns appear regularly at Horse Racing Nation. Click here to read past editions.