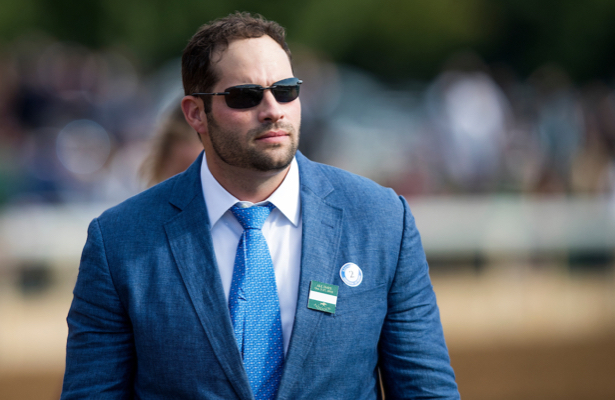 Trainer Brad Cox’s 2018 season was unequivocally his best so far, with highlights including the barn’s first Grade 1 win, plus victories in the Kentucky Oaks and Breeders’ Cup Distaff with Monomoy Girl at his home track, Churchill Downs.

As several of his top earners return to training at Fair Grounds and Oaklawn Park, does that change anything for Cox as 2019 ramps up?

“No, no,” he said. “Just a new day, new battle. New year, new battle. But it’s just business as usual. Nothing’s really changed. Just try to continue to have good horses in the barn, happy and healthy, and looking for quality horses.”

In total, Cox horses earned more than $15 million in 2018, fifth overall among North American trainers. He also ranked fourth by victories with a 26 percent win rate from 921 starts.

Had it not been for a disqualification in the Cotillion Stakes (G1), Monomoy Girl would have gone undefeated in seven starts in 2018. She went into the race with four straight Grade 1 victories and found her way back to the winner’s circle against older fillies and mares in the Distaff. The chestnut daughter of Tapizar certainly contributed to Cox’s earnings, taking home over $2.8 million last year.

The second highest-earning horse in the barn was Arklow, who made $827,395 in 2018 to top $1 million for his career. The 5-year-old son of Arch hit his best stride of the season in late summer. He won the Kentucky Downs Preview Calumet Farm Turf Cup at Ellis Park before taking the Calumet Farm Kentucky Turf Cup (G3) at Kentucky Downs. To cap his year, Arklow ran a respectable fourth behind Group/Grade 1 winners Enable, Magical and Sadler’s Joy in the Breeders’ Cup Turf.

Cox said there is no particular race in mind for Monomoy Girl or Arklow to start off 2019, but having them back to the races by April is the goal.

“They’re both in Ocala,” he said. “They’ll be back in January to the Fair Grounds and we’ll start preparing them for a spring campaign.”

Cox also trains 4-year-old Exclamation Point, a half-brother to Grade 1 winner Classic Empire. Exclamation Point was undefeated in three starts last year. He last raced in April and missed the rest of the year with a minor leg injury.

“He’s doing really well,” Cox said. “Hopefully we’ll start him at some point in February. He should be ready to go at Oaklawn.”

Exclamation Point will target an allowance race. He’s put in two works at Oaklawn Park and most recently made a four-furlong move Dec. 30 in 49.80.

Other high points of last season for Cox include Leofric winning the Clark Handicap (G1) and Long on Value taking the Highlander Stakes (G1). Mr. Misunderstood and Golden Mischief picked up Grade 2 wins during the year while Sassy Sienna, Tiger Moth, Will Call, Beyond Blame and Plainsman took home Grade 3s.

“It was huge,” the trainer said. “Finally being able to get a Grade 1 and follow it up with some others and have three horses win a Grade 1, it was a great year. Hopefully bigger and better things to come in the future.”