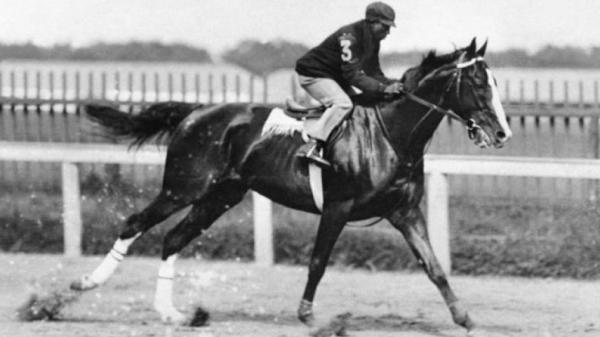 Once upon a time, a long time ago, the Kentucky Derby was a regional race that lacked the international prestige it boasts today. There was no such thing as a Road to the Kentucky Derby; literally any horse could contest the race if their owners were willing to pay the entry fee.

Naturally, this led to some surprising and unusual winners, with perhaps none more bizarre by present-day standards than Alan-a-Dale. In 1902, the chestnut colt with a big white blaze pulled off unique 3-year-old season that has never been equaled before or since – he ran in just one race that year, and that one run yielded a victory in the Kentucky Derby.

It can be said that Alan-a-Dale’s genetics laid the foundation for this singular campaign. Seemingly, he was cut out to be a Derby winner from the moment he was born – after all, his sire, Halma, had won the 1895 Kentucky Derby by five easy lengths, the third-largest margin of victory in 27 renewals of the race.

Alan-a-Dale also had a classic human interest story worthy of Kentucky Derby lore. The colt’s young trainer Thomas Clay McDowell – just 36 years old at the time of the Derby – also bred and owned Alan-a-Dale, a rarity in modern racing. Like his star colt, McDowell also had a “pedigree” of impressive lineage; his great-grandfather was the famous U.S. statesman Henry Clay, Sr., and McDowell’s father and grandfather were involved in the breeding of Thoroughbreds and Standardbreds.

In his own Thoroughbred breeding enterprise at Ashland Farm in Kentucky, McDowell favored a less-is-more and quality-over-quantity approach. “He does not own more than fifteen or twenty mares, but they are bred in the choicest lines and are splendid animals,” opined the Jan 5, 1898 edition of the Buffalo Courier.

Certainly the quality of Alan-a-Dale was apparent early on. When McDowell unveiled the colt as a 2-year-old in 1901, he was rewarded with a string of brilliant performances. Alan-a-Dale debuted on June 22 in a sprint going five-eighths of a mile at Washington Park, starting as the heavy favorite and obliterating the field by six lengths in 1:00 1/5 seconds, breaking the track record.

“Alan-a-Dale is one of the handsomest Thoroughbreds ever seen, and made a great impression on horsemen,” wrote the June 26 edition of the Chicago Tribune. But these accolades paled in comparison to those bestowed on Alan-a-Dale after he won a slightly longer sprint in spectacular front-running fashion on June 28.

On that occasion, Alan-a-Dale showed sensational speed from the start, blitzing the first three-eighths of a mile in :33 1/5 before cruising eased up to the wire in 1:07 3/5, not far off the track record. The following day, the Chicago Tribune stated that “Alan-a-Dale’s performance in the first race was pronounced by old and well seasoned horsemen to be the most brilliant burst of speed they ever witnessed.”

After turning down a $25,000 offer for Alan-a-Dale – a huge sum for the day – McDowell shipped the colt east for the Brighton Junior Stakes at Brighton Beach, where the colt proved a gallant winner against a large field of classy New York juveniles. Unfortunately, the effort seemed to take something out of Alan-a-Dale, and he was never a threat while finishing off the board in the Foxland Stakes one week later, his final start of the season.

After heading back to the Midwest, Alan-a-Dale was pointed toward the 1902 Kentucky Derby, though getting him there would be a challenge. The colt was battling to stay sound, with one of his knees giving him particular trouble, and McDowell had to rely on training alone to prepare Alan-a-Dale for the stiffest test of his career.

Nowadays, it’s hard to imagine a horse making his 3-year-old debut in the Kentucky Derby, yet that’s exactly the path that Alan-a-Dale followed. Not only that, the Kentucky Derby would mark his first race since the previous July and his first run beyond three-quarters of a mile.

Despite receiving 112 nominations, just four horses ultimately turned out to contest the 1902 Kentucky Derby on May 3. McDowell entered Alan-a-Dale and The Rival, who were coupled in the wagering but considered by many to be overmatched against the highly regarded favorite Abe Frank. Rounding out the field was the longshot Inventor; at double-digit odds in a small field, he wasn’t expected to challenge.

It took a bit of effort to get the Derby field underway – remember, this was back in the days before starting gates – but from the moment the horses embarked on their 1 ¼-mile journey, Alan-a-Dale was in control of the race. He broke on top under jockey Jimmy Winkfield, held a clear advantage passing the Churchill Downs stands for the first time, and only widened his margin from there, topping out with a six-length lead roughly halfway through the race. The fractions he posted at the first three quarter-mile markers – :24, :48, 1:14 – were genuinely fast for the era.

Rounding the far turn, the pace-pressing Abe Frank came under pressure to keep up, but the favorite failed to respond as expected, leaving Alan-a-Dale a seemingly certain winner. It’s here where accounts of the race begin to vary. What’s certain is that Alan-a-Dale, sprinting hard and trying his best to stay in front, suffered an injury during the race and lost ground in the homestretch to the late-charging Inventor, who made a gallant effort to outrun expectations and surprise the racing world.

But Inventor’s late rally fell short as Alan-a-Dale dug deep and found something extra. Officially, records from Churchill Downs state that Alan-a-Dale prevailed “with flawless courage” by a nose, stopping the clock in 2:08 ¾. Contemporary newspapers accounts suggest that he won by a bit more, with the Idaho Statesman going so far as to claim that jockey Jimmy Winkfield, “without whip or spur,” confidently rode Alan-a-Dale to a one-length triumph.

But the big story was Alan-a-Dale’s injury. Two days after the race, the Delphos, Ohio Daily Herald reported that Alan-a-Dale racing career was in serious doubt. “Whether or not the colt is permanently broken down has not been definitely determined. The exact seat of his lameness has not been located… after the Derby Saturday it was found that a tendon in his foreleg had given way from his trying to save his left knee, which has given him trouble for some time.”

Thus, Alan-a-Dale’s 3-year-old season began and ended with a gallant front-running victory in the Kentucky Derby. Fortunately, his longer story had a happy ending. At the end of May, the Louisville Courier-Journal reported that “[Alan-a-Dale’s] tendon, which was looked upon as the real serious part of his undoing, is all right… McDowell, who is a master hand with crippled Thoroughbreds… not only hopes to bring Alan-a-Dale to the races again next season, but confidently believes that should no further trouble develop he will be able to do so.”

And that’s exactly what happened. Alan-a-Dale would race on for three more years, winning 13 of his 32 races during that timeframe. In retirement, he lived a long, happy life, passing away in 1925 at the age of 26. The news of his death was noteworthy enough to be published in the Oct. 13, 1925, edition of the Cincinnati Enquirer, which noted that Alan-a-Dale had “been used to breed hunters and jumpers… He was a fast and courageous racer and sired good horses after being retired to stud.”

Two minutes, eight and three-quarter seconds. That was the duration of Alan-a-Dale’s 1902 racing season, but that was all the time he needed to forever enter the history books as a unique and unforgettable winner of the Kentucky Derby.