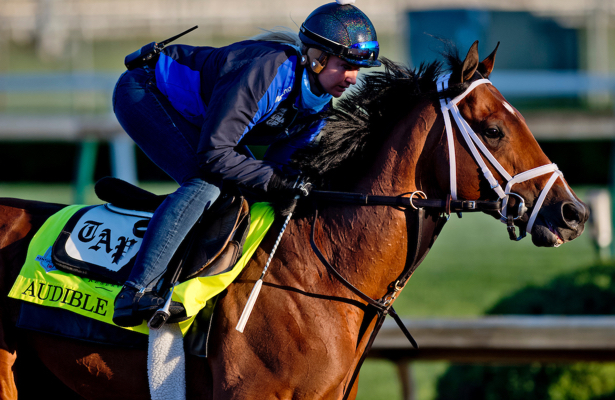 Audible, who captured both the Florida Derby (G1) and Holy Bull (G2), is the most prominent name on the list of nominations for the $100,000 Harlan’s Holiday Stakes set for Dec. 15 at Gulfstream Park.

Trainer Todd Pletcher plans to use the 1 1/16-mile stakes as a steppingstone for a start in the $9 million Pegasus World Cup (G1) over the same course on Jan. 26.

The Harlan’s Holiday, which attracted 15 nominations, will be Audible’s second start since his third-place finish behind Justify in the Kentucky Derby. Owned by China Horse Club International, WinStar Farm, Starlight Racing and Head of Plain Partners, the 3-year-old son of Into Mischief captured the seven-furlong Cherokee Run by two lengths on the Breeders’ Cup undercard at Churchill Downs Nov. 3.

Pletcher also nominated Bal Barbour, who has won his two most recent starts, an allowance at Keeneland and the off-the-turf Gio Ponti Stakes at Aqueduct; and Village King, a Group 1 winner in Argentina who recently won the off-the-turf Red Smith at Aqueduct.

The Sugar Swirl, a six-furlong sprint for fillies and mares, drew 13 nominations, including Stormy Embrace, the winner of the Princess Rooney (G2) on Summit of Speed day at Gulfstream June 30 and Curlin’s Approval, a multiple Grade 2 stakes winner.

The Rampart, a mile stakes for fillies and mares, attracted 17 nominations, including multiple graded-stakes winner Tequilita.

The My Charmer, a mile turf stakes for fillies and mares, drew 34 nominations, including multiple graded-stakes winner and multiple Grade 1 stakes-placed Hawksmoor.