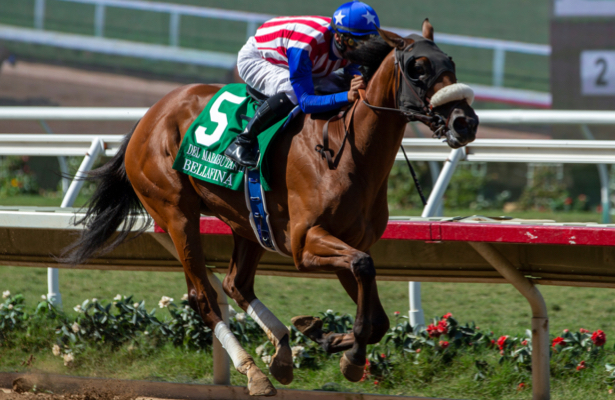 While Bellafina finished fourth as the favorite in the Breeders’ Cup Juvenile Fillies, trainer Simon Callaghan doesn’t believe that was her “true running” some nine lengths behind the winner and possible champion Jaywalk.

Connections have identified a number of reasons for the performance — including that the daughter of Quality Road was in heat — and haven’t lowered their expectation to campaign her as a Kentucky Oaks prospect in 2019.

“That’s the race that we’re pointing toward,” Callaghan said. “Obviously we’ve got to get through one or two preps and then the Santa Anita Oaks. From there, we’ll make the decision of whether we go the Oaks route or go to a race like the Test.”

Kaleem Shah’s Bellafina broke her maiden second out in the Sorrento Stakes (G2), then went on to take both of California’s Grade 1s for 2-year-old fillies, the Del Mar Debutante and Chandelier. Those wins came by a combined 15 lengths as she was never challenged.

Since the Breeders’ Cup defeat, Bellafina received “a little freshening,” Callaghan said, but she never left the barn. After three weeks of jogging, the filly is back to galloping and has put in “two very easy half miles,” with the more recent work clocked at 49.40 seconds Sunday at Santa Anita Park.

“We’re happy with her,” Callaghan said. “We’re going to bring her back either January or February in one of the prep races,” with the Santa Ynez (G2) on Jan. 6 and the Las Virgenes (G2) scheduled for Feb. 3 at Santa Anita.

Bellafina is the barn’s current big horse, while Callaghan also has a pair of 2-year-old colts to watch. One, Value Play, broke his maiden Thursday at Los Alamitos. The other, Stretford End, is 0-for-3, but each of his finishes were seconds to well-regarded Bob Baffert runners.

All of the above are owned by Shah, a relatively new client for the trainer.

“When he transferred his horses to me, it came at a good time,” Callaghan said. “We’d just lost Abel Tasman, and it was nice that we picked up a big player that wants to win big races and obviously is prepared to spend and give us the opportunity to get good horses.

“It’s gone, I think, very well in the couple years we’ve been working together. We’re both focused on finding Grade 1 horses, and hopefully we can find some more.”