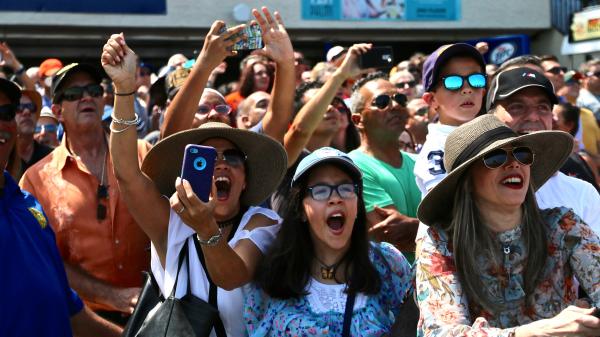 America’s Best Racing, Belle Premium American Vodka, and handicapper (and avid gambler) Monique Vág team up to provide horseplayers with their best bets of the weekend.

Vág will identify her top picks as well as at least one longshot play of the weekend, a nice opportunity to swing for the fences on a win bet or to take a shot with a show bet. She also will occasionally look for strong exacta plays for the weekend or try to spot a nice opportunity for other wagers.

Belle Premium American Vodka is the official vodka of America’s Best Racing. The American-made, American-owned vodka is distilled in Virginia, the birthplace of Thoroughbred breeding and racing in North America. The company’s mascot, Belle ‘n Tonic, broke her maiden at Laurel Park in Maryland last April.

#5 Garter and Tie: His effort two starts back in the overnight stakes at Gulfstream Park where he broke a bit slowly and then worked out a perfect trip from post No. 8 was by far his most impressive and it earned him a speed figure of 102. His racing experience within the stakes ranks could prove super useful, and so could the jockey upgrade to Tyler Gaffalione. He looms as the one to beat.

#2 Midnitesalright: She has come close to breaking her maiden numerous times already, and her early speed is certainly an asset as it looks like she will be on the front end once again today. With many horses making their racing debut, it is imperative she gets a clean break and takes advantage of the inside post. Seems like only a matter of time before she gets into the win column, and this filly looks overdue.

#2 Aunt Hattie: She only has one career race and that was a winning effort over a yielding turf course. In her debut she was bet heavily and executed a perfect race positioned just off the speed. Her times look really quick, and drawing an inside post is certainly favorable as she could work out a similar effort like her debut being forwardly placed.

#5 Keota: She has gone back and forth between two trainers this year, and despite the moves, the efforts have been there and she has looked sharp. The shortening of distance today is intriguing and looks like her ideal one, as there have been efforts where she has tired in deep stretch going longer. I think she is undervalued in this spot, and certainly has shown enough tactical speed to back at a nice price.

Sports Pick of the Weekend

PICK: L.A. Chargers -13.5 (-120): This game features the largest spread of the week, and for good reason – the Bengals have lost four straight and have looked terrible on the road all season. For Cincinnati, quarterback Jeff Driskel will be making his second career start and will be without A.J. Green. Last week the Bengals only managed 200 yards of passing offense and have a slew of injuries on both sides of the football. The Chargers cruise on Sunday and easily make it three wins in a row.