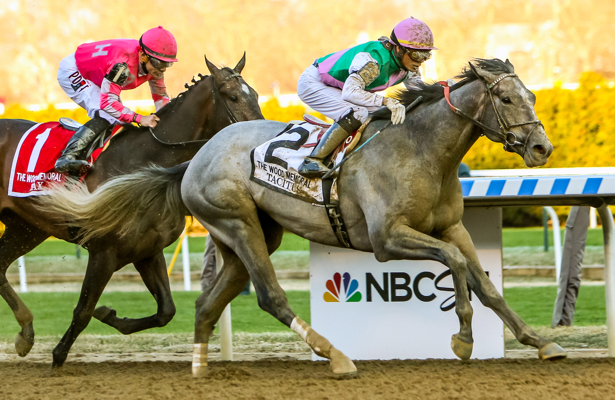 Saturday’s Belmont Stakes has an expected field of 10 with seven of them having last raced in either previous leg of the Triple Crown series.

Horses coming from the Kentucky Derby and the Preakness Stakes dominate the Belmont. Since the turn of the century, those runners have completed the exacta the majority of the time, while a few 3-year-olds from the Peter Pan (G3) and the Preakness weekend undercards have snuck into the top two.

Excluding the Triple Crown victories of Justify and American Pharoah, the leading American sire Tapit has dominated the Test of the Champion with all three winners: Tapwrit (2017), Creator (2016) and Tonalist (2014). There are three sons of the gray stallion in this year’s field.

Post time for the Belmont Stakes is scheduled for 6:45 p.m. ET. Ahead of Tuesday’s draw, here’s an early look at the field with projected morning line odds.

Tacitus [HRN odds: 2-1 – 3rd Kentucky Derby – Tapit – B. Mott/J. Ortiz – 5: 3-0-1 – $953,000] It is likely that Tacitus will go to post as the favorite over the Preakness winner War of Will given many assume he’s more meant for the Belmont Stakes. Tacitus is by Tapit with champion Close Hatches on the dam side. Breeding reinforces that idea that the mile and a half is ideal for Tacitus.  Both of his Derby trail victories showed the steady, grinding running style that is essential for success in this race. Bill Mott chose to skip the Preakness after Tacitus hit the wire fourth in the Derby before promoted to third in the running order. Likely favorite and top choice.

War of Will [HRN odds: 5-2 – 1st Preakness – War Front – M. Casse/T. Gaffalione – 10: 4-1-1 – $1,491,569] War of Will is going to be the only horse to run in all three legs of the Triple Crown this year. That is a feather in his cap and an indication of his durability. However, many handicappers will suggest that War of Will could be a tired horse. It is important to highlight the fact that this Mark Casse runner has only made five starts in 2019. Casse uses racing to the get his horses into peak condition. War of Will’s wins on the Derby trail and in the Preakness came after staying close to the early pace and then taking control of the race with a noteworthy turn of foot. This is ideal for the Belmont. I can’t find any reason to knock War of Will. Must be respected.

Bourbon War [HRN odds: 8-1 – 8th Preakness – Tapit – M. Hennig/M. Smith – 6: 2-1-0 – $202,100] Bourbon War was certainly one of the most disappointing horses in the Preakness based on his eighth-place finish as the 5.60-1 second choice. The official chart from Baltimore said that the Mark Hennig trainee was “no factor.” He got all that action based on his promising performances in the Fountain of Youth (G2) and the Florida Derby (G1). Blinkers went on for the first time in the Preakness to keep him closer to the pace. But by my observations, Bourbon War was washed out before post time, and jockey Irad Ortiz Jr. had his legs out of the irons for a few minutes trying to get his horse to calm down. Maybe it was the blinkers, but he did no running on that day. The equipment’s coming off, Mike Smith gets the mount, and he has the Tapit factor. To me, the bottom line is that Bourbon War has not won beyond the allowance level and has lots of questions to answer while likely attracting a lot of action again. Toss.

Master Fencer [HRN odds: 8-1 – 6th Kentucky Derby – Just a Way (JPN) – K. Tsunoda/J. Leparoux – 7: 2-2-0 – $234,392] After running sixth in the Kentucky Derby, the Japanese runner Master Fencer got a lot of attention as he skipped the Preakness to target the Belmont. Consensus view is that he is likely to go to post as the third choice, and that will make him a significant underlay to win the race. I feel that Master Fencer has a chance to hit the board, but the odds are to win and not to finish third or fourth. Passing tired horses in the 20-horse Kentucky Derby does not translate directly to doing the same thing going 12 furlongs. Use underneath.

Sir Winston [HRN odds: 10-1 – 2nd Peter Pan – Awesome Again – M. Casse/J. Rosario – 9: 2-1-1 – $161,773] This “other” Casse runner is in the Belmont after he flashed his best race of the year in the local prep, the Peter Pan, rallying from last — some 11 lengths behind — to finish second, beaten a little more than a length. It must be noted that the Peter Pan was run as a one-turn mile and an eighth and had a field of five. Clearly, he’s an improving horse but is unlikely to win the Belmont. Toss.

Intrepid Heart [HRN odds: 10-1 – 3rd Peter Pan – Tapit – T. Pletcher/J. Velazquez – 3: 2-0-1 – $140,400] This Todd Pletcher trainee is the most lightly raced horse in the field. He brings the Tapit angle, and his trainer knows how to win this race. Intrepid Heart stumbled pretty badly leaving the gate for the Peter Pan and managed to get third while recording his highest speed figure. The positive view of his limited experience is that he has the opportunity to improve, and the distance should be to his liking as a half-brother to the 2014 runner-up Commissioner. With double digit odds likely, he will bring good value to the gate. Live longshot.

Everfast [HRN odds: 12-1 – 2nd Preakness – Take Charge Indy – D. Romans/L. Saez – 11: 1-2-1 – $464,805] Despite one win in his 11 starts, Everfast has accumulated almost a half-million in earnings. Plus, while trainer Dale Romans has never won the Belmont Stakes, he has recorded four third-place finishes. We know Everfast is capable of jumping up to run a big one based on his Preakness runner-up. Likely, Everfast will not be that big of a price in New York, but at 12-1 on this morning line, he has a chance to get Romans another in-the-money result. Trifecta finish.

Spinoff [HRN odds: 15-1 – 18th Kentucky Derby (G1) – Hard Spun – T. Pletcher/TBA – 5: 2-1-1 – $260,000] Spinoff is the classic example of a Pletcher trainee that ran in the Derby, skipped the Preakness, and went straight to the Belmont. To seriously consider this son of Hard Spun you would need to draw a line through his Derby performance assuming he did not handle the track conditions. That takes you back to four excellent races, including the second in the Louisiana Derby (G2). He showed the right running style for the Belmont in those starts and will bring good value. Use underneath.

Tax [HRN odds: 20-1 – 14th Kentucky Derby – Arch – D. Gargan/J. Alvarado – 6: 2-2-1 – $326,300] Similar to Spinoff, excluding the Derby, Tax has not run a bad race in his other five starts. In the Wood Memorial (G2), he stalked the pace, raced along the rail to finish a good second behind Tacitus. In his earliest races, he ran pretty close to the early pace. To be honest, I would not be surprised to see back near the lead. Trainer Danny Gargan likes to send his horses to the lead, and Tax has the pedigree to potentially carry his speed all the way around. Attractive odds.

Joevia [HRN odds: 20-1 – 1st Long Branch – Shanghai Bobby – G. Sacco/N. Juarez – 5: 2-2-0 – $131,600] Joevia is likely to be the longest shot in the field, although that may mean only around 25-1 with contenders well balanced behind the Top 2. Based on his front-running victory in Monmouth Park’s Long Branch, this Greg Sacco runner is likely to set the early fractions. The rest of the field will probably stay close assuming he will fade after about a mile. Toss.