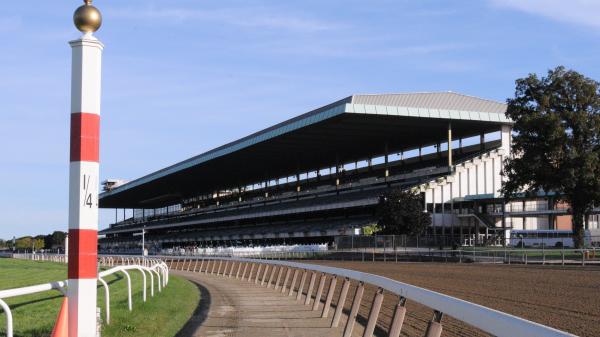 The first thing most people who visit Belmont Park for the first time notice is how big the track is. It’s unusually big. The turns are wider than most tracks. The half-mile pole sits where the ⅜ pole is at other tracks. A mile and an eighth race most everywhere in America starts and finishes in front of the grandstand, with the horses going around two turns. At Belmont it’s a one-turn affair. The width and breadth of the track can feel overwhelming to riders. They say it feels like the big track is swallowing them up.

The thing that horsemen notice about Belmont that the fans don’t see is that the dirt track is composed of a bit more sand than what they’re used to in other locales. The dirt on the track surface is a mixture of sand, silt and clay, which is the same at most tracks. But Belmont’s surface tends to have a bit more sand in it. They mix it that way because of the amount of rain they get in New York, and the constant humidity that rain causes in the summer, when Belmont is running. All that sand may help the track drain water, but it creates a deeper surface than some horses are used to riding on, and requires an adjustment.

All of this is why the track is nicknamed “Big Sandy.” It’s a fairly straightforward nickname. It’s big, it’s sandy. But it also has a hip ring to it, like something from Damon Runyon. It’s easy to think the name comes from some mid-century try-hard turf writer, like the one who named New York City “the big apple.” But the earliest mentions of the nickname Big Sandy I could find were from 1990, when trainer Carl Nafzger mentioned the nickname in an interview. Later mentions throughout the 1990s were also from horsemen, or attributed to horsemen in general.

It makes sense, and is fitting, that the nickname would be something from the backstretch and the barns, rather than the sports pages. Big Sandy is both literally descriptive and fondly affectionate. While horsemen can often feel cowed by the size and depth of the Belmont surface, they attack that problem by spending time there working their horses and getting to know it. To not know Belmont is to fear it. To race Belmont with confidence, you need to get familiar with Big Sandy.