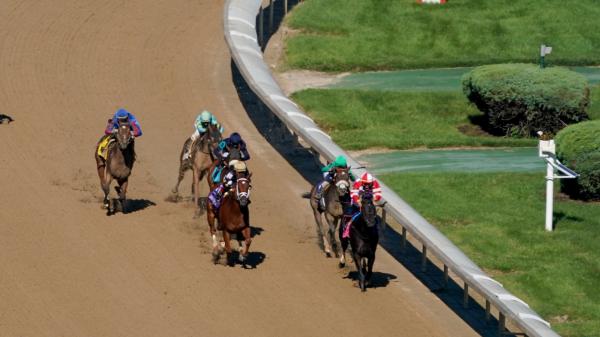 There’s only one North American graded stakes winner in the field, #2 Finite, who won the Grade 2 Golden Rod Stakes last fall on this track as a 2-year-old and the Grade 2 Rachel Alexandra Stakes at Fair Grounds in February. The Steve Asmussen trainee exits a very good runner-up finish behind Venetian Harbor in the seven-furlong, Grade 2 Lexus Raven Run Stakes at Keeneland on Oct. 17, losing by a neck, and figures to be the post-time favorite.

There are a handful of intriguing contenders with less back class than Finite that are nonetheless in good form and could be primed for a big effort.

First among them is #3 Grand Cru Classe. This 3-year-old Bernardini filly, trained by Hall of Famer Bill Mott, finished third in the Raven Run, a half-length behind Finite. That was only her fourth career start and her first loss. She’ll be racing on her fifth different track Saturday and, if she can improve on her 108 Equibase Speed Figure from the Raven Run (only a point behind Finite’s 109), she could end up in the winner’s circle. She’s already won at a mile and 1 1/16 miles and Tyler Gaffalione gets aboard for the first time. I expect him to keep Grand Cru Classe right off of the early pace in a race that doesn’t project to have much speed lined up, aside from #6 Risky Mandate and possibly #7 Crazy Sexy Munny.

Two other fillies who should go off at square prices that I think can hit the board are #4 Whoa Nellie and #9 Sanenus.

Whoa Nellie has not started since losing the Grade 3, 1 1/16-mile Bayakoa Stakes at Oaklawn Park by a neck to multiple graded stakes winner and $600,000 earner Go Google Yourself on Feb. 17. She’s only finished out of the money once in 10 career starts, prefers racing at seven furlongs to a mile, and has two wins, one second, and one third in four starts at Churchill. She’ll need to improve her Equibase Speed Figures slightly but has been training well for her return under Larry’s Jones’ expert supervision.

Sanenus, a daughter of Scat Daddy, won two group stakes in her native Chile and has been competitive in her two starts in North America, finishing third in her debut at Del Mar and then third again on Sept. 26 at Churchill racing at the one-turn mile she’ll try again Saturday. Like Whoa Nellie, Sanenus also been training well at Churchill and also prefers to stalk the pace.

Below are three betting strategies based on budgets of $10, $20, and $30. I’ll bet Grand Cru Classe to win and use her as my key horse in exacta and trifecta tickets with Finite, Whoa Nellie, and Sanenus, adding #6 Risky Mandate on the bottom of the trifecta based on her pace-setting ability and the series of bullet workouts she’s been reeling off at Churchill for trainer Tom Amoss.

Betting strategy for a $10 budget – what to say at the betting window:

Betting strategy for a $20 budget – what to say at the betting window:

Betting strategy for a $30 budget – what to say at the betting window: