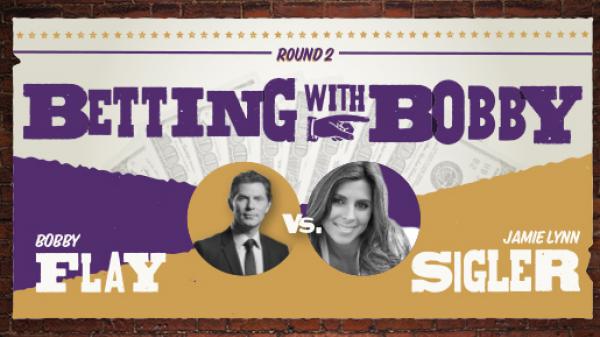 In week one of Betting with Bobby, Flay defeated reality TV star Carson Kressley in their Stephen Foster Handicap matchup. Flay’s selection of Tom’s d’Etat finished ahead of Thirstforlife, which was Kressley’s pick. As a result, Breeders’ Cup and America’s Best Racing will make a $1,000 donation in Flay’s name to New York’s Citymeals on Wheels. For Kressley’s participation, a $500 donation will be made in his name to the American Saddlebred Museum at the Kentucky Horse Park in Lexington.

This week’s matchup pits Bobby against TV star Jamie-Lynn Sigler. Known best for playing the role of Meadow on HBO’s “The Sopranos,” Sigler will face off against Flay in Saturday’s Belmont Derby Invitational at Belmont Park. This year, the Belmont Derby kicks off the brand-new Turf Trinity series which will unfold as the second half of the racing year’s turf (grass) version of the Triple Crown, which is run on dirt.

The Turf Trinity for male horses begins with the Belmont Derby and continues on Aug. 4 with the Saratoga Derby. It concludes on Sept. 7 with the “Win and You’re In” $1,000,000 Jockey Club Derby. With $5.25 million on the line, the best 3-year-old turf runners in the world will compete in the Turf Trinity and Turf Tiara (the female division). Broadcast on NBC and FOX Sports, the Turf Triple Series will be run at Belmont Park and Saratoga Race Course.

Each player has been asked to select one horse to win this week’s designated race. If one player selects the winner of the race and the other player doesn’t, the player with the correct selection is this week’s winner.

FIND OUT WHO BOBBY AND JAMIE-LYNN PICKED BY VISITING THE BETTING WITH BOBBY SITE. Picks will be live by Friday, July 5.