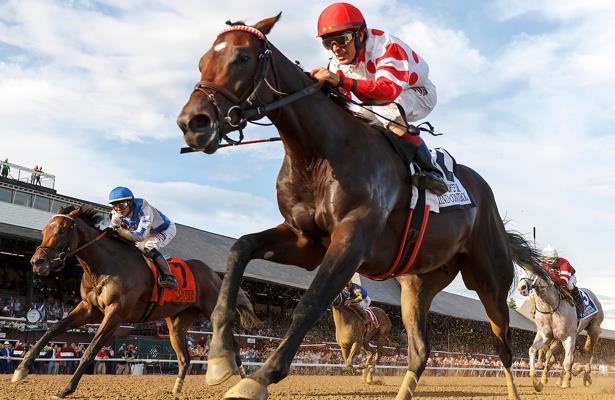 The trainers list of nominees for the Dec. 16 Springboard Mile, worth $400,000 and a prep for the 2019 Kentucky Derby on closing day at Remington Park, reads like a who’s who of horse racing with seven of the top 13 conditioners in the country according to money earned nominating horses.

Steve Asmussen has nominated 11 horses for the race, with three of those virtual locks to run: Long Range Toddy, Tobacco Road and Tone Broke. The other trainers nominating some of their top juveniles include Bob Baffert, Brad Cox, Michael Maker, Jason Servis, Peter Miller and Jerry Hollendorfer.

It doesn’t hurt that the Top 4 finishers in the Springboard for 2-year-olds get points (10-4-2-1) toward next year’s Derby..

Among the 58 nominations, one horse is already on the grounds in Danny Pish’s barn for trainer Kelly Breen – Epic Dreamer – who landed in Oklahoma City on Tuesday aboard Tex Sutton’s Air Horse One. Mind Control, who ran seventh in the $2 million Breeders’ Cup Juvenile last time, is expected on the backside soon.

Epic Dreamer, a colt by 2013 Kentucky Derby winner Orb, out of the Dixieland Band mare Dixie Crisp, broke his maiden on Oct. 26 at Belmont Park in New York by 2-1/2 lengths when Breen changed to jockey Javier Castellano and moved from a first-race sprint to 1-1/16th miles in his second start.

Before the Breeders’ Cup, Mind Control was the winner of the Hopeful Stakes (G1) at Saratoga on Labor Day. He is trained by Gregory Sacco.

Another probable for the Springboard is Six Shooter, trained by Paul Holthus. Holthus finished second in the training standings at Remington Park the first spring thoroughbred meet in 1989. He is the son of the late legendary Oaklawn Park trainer Bob Holthus, who conditioned Proper Reality to an Arkansas Derby win in 1988 and fourth-place finish in the Kentucky Derby. Holthus is a multiple stakes winner at Remington Park, including wins in the $44,000 Lady Remington Breeders’ Cup Handicap with Bernique, ridden by the late, great Garrett Gomez in 1992 and as recently as 2016 with Miss Mo Kelly in the $100,000 She’s All In Handicap, ridden by Belen Quinonez.

Six Shooter is a 2-year-old gelding by Trappe Shot, out of the Lemon Drop Kid mare Academy Road. He is owned by Dundalk LLC and N P H Stable and bred in Kentucky by Craig D. Upham. Holthus claimed this horse out of Bret Calhoun’s barn for $20,000 from a Churchill Downs maiden race on Sept. 20. He was taken to Indiana Grand where he broke his maiden Oct. 17, sprinting six furlongs and pulling away to win by 6-3/4 lengths. He followed that up with a couple of races in allowance company at Churchill Downs. He ran third at seven furlongs Nov. 10 and then won a $78,500 allowance race for non-winners of one other than when he was stretched out to a mile. Holthus made a change to jockey Ricardo Santana Jr. in his last race and it keyed the victory. Santana won five races on Oklahoma Derby Day earlier this season at Remington Park.

• Long Range Toddy, owned and bred in Kentucky by Willis Horton Racing LLC, won the $100,000 Clever Trevor Stakes at Remington on Nov. 2. He is a 2-year-old colt by Take Charge Indy, out of the Unbridled’s Song mare Pleasant Song.

• Tone Broke has the same connections as Tobacco Road. This son of Broken Vow, out of the Smart Strike mare Mendocino Beano, has won his last two in a row, breaking his maiden at Remington and then winning an allowance race here.

Trainer C.R. Trout, who has trained two millionaires at Remington Park – Maysville Slew and Shotgun Kowboy, may have a runner in the Springboard as well with Dorrance. This 2-year-old colt by Distorted Humor, out of the Lemon Drop Kid mare Apologize, showed some talent Wednesday night at Remington winning at first asking by 4-1/2 lengths at 7-5 odds in a 6-1/2 furlongs maiden race. He took over after a half-mile and was never headed after that, with Cabrera in the irons.