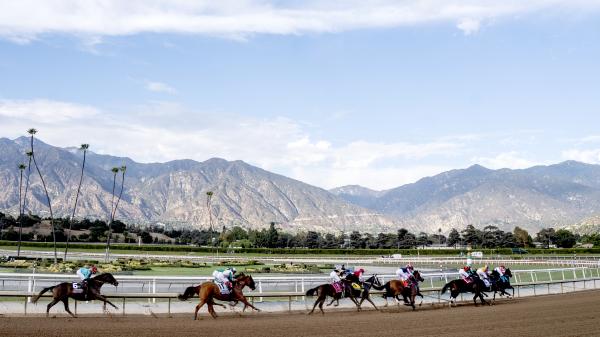 Racing resumes at Santa Anita Park this weekend and one of two feature races is the $150,000 Echo Eddie Stakes. The field of nine is top-heavy in early speed types. Stir the Pot is the only maiden in the field but may be the fastest early if he can flee the rail, having zipped out to lead from the start in his most recent race and holding that lead until past the eighth pole. However, Stir the Pot is likely to have his work cut out for him as Bettor Trip Nick adds blinkers to add to his already proven early speed, evidenced by having the lead after a quarter mile in five of six career races including a win in the Golden Nugget Stakes last fall. Just inside of Bettor Trip Nick in the gate is Project Leader, who has led from start to finish in two straight races.

Among the horses who may not be need-the-lead types, Phantom Boss has top credentials having won the Grade 3 Bashford Manor stakes last June. However, Phantom Boss finished seventh in his only other race after that and has been away from the races for more than eight months. Rookie Mistake finished third in the Baffle Stakes on turf in February before another win on grass and hopes to run as well on dirt. Club Aspen won the King Glorious Stakes around two turns in December, has won at the distance on dirt, and appears to be a strong contender. New faces in the stakes ranks include Big Sweep, the only filly in the field and a strong winner of her only start over the track in March. Another is Audace, who may add more early speed to the mix coming off a wire-to-wire win when breaking his maiden in March. Summer Fire has yet to run in a stakes race going short but does have the right style to benefit from the hot early pace.

Although Big Sweep won her career debut and only start leading from start to finish, there is evidence she is not a need-the-lead type and won’t get caught up in the likely early pace battle between Stir the Pot, Project Leader, and Bettor Trip Nick. Outside of that trio in the gate, Big Sweep may find herself in a great spot in fourth as the field moves down the backstretch, enabling her to take over on the turn and hold off any closers. In her debut Big Sweep earned a field-high 99 Equibase Speed Figure and should improve in her second career start. It’s interesting to note trainer Mark Glatt entered her in this race instead of the filly version later on the card, likely because he had an idea of who was going to run in that race including a multiple stakes winner in Warren’s Showtime, rather than a number of horses not nearly as proven in stakes. Better still, as a filly Big Sweep gets to carry from five to nine pounds less in jockey and saddle weight compared to the rest of the field.

Club Aspen is proven in stakes races around one and two turns. He won at six furlongs last August in the second start of his career. Then last December he won the King Glorious Stakes around two turns. Jockey Velez has been aboard for both wins and rides today. Club Aspen earned a career-best 95 figure when second in a dirt sprint in November before a 93 figure in the King Glorious and could run even better as a more mature 3-year-old.

Summer Fire and Rookie Mistake get honorable mention. Rookie Mistake won a turf sprint in his most recent start on March 6, with Summer Fire a fast-closing fourth, beaten a neck for third. While Rookie Mistake earned a higher 96 figure, he is winless in three starts on dirt although he did finish second in one of them. Summer Fire beat him that day while earning his only win in a dirt sprint. Both have a closing style to benefit from the likely contested early pace scenario in this race.