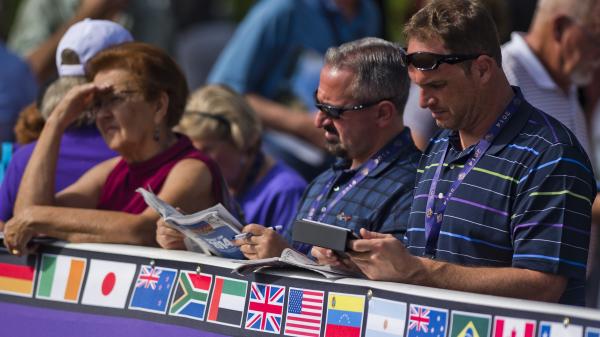 Everyone has heard about the Kentucky Derby presented by Woodford Reserve and just about every adult (that I know, at least) has made a bet on the Derby. The Breeders’ Cup World Championships are just as much of a spectacle, and the two-day event offers even more opportunities to cash big tickets on premier horse racing. If you’ve never bet on the Breeders’ Cup before, we’ve put together an introductory guide for how to approach the wagering opportunities that await on Friday, Nov. 1, and Saturday, Nov. 2.

Never is it tougher to stick to a fixed budget than on Breeders’ Cup weekend but you’ve got to try to do it. It’s so tempting to take shots on any number of races because you’ll find that horses that would normally race at odds of 2-to-1 (+300) running at Breeders’ Cup at odds of 5-to-1 (+600) or higher, depending on the race. But realistically, you’ll be lucky to catch two or three winners on the weekend and if you don’t save your bankroll for the races you like best, you’ll be out of ammo to take your best shots. That’ll leave you in a position where you’re frantically searching for an ATM; it’s not a good look — trust me, I’ve been there. As the old saying goes; bet with your head, not over it.

Just about every race is a great betting race at Breeders’ Cup. You’re going to find full fields in all 14 Breeders’ Cup races which will each provide a potential opportunity to make a big score. But if you end up chasing race after race, you could find yourself in a hole and in a hurry. What has worked best for me in the past is identifying two or three horses on the day who have a solid chance to win at a big price. Rather than throwing an equal amount of money on a dozen or so races in which you don’t feel as confident (either in a particular horse or that the race winner will provide the value that you’re looking for), it makes more sense to set aside a large chunk of your budget for betting on the two or three races you’re most locked in on.

As already alluded to earlier, you’re going to get great value on just about every horse you might want to bet on at Breeders’ Cup. Therefore, you don’t have to bet hundreds of dollars to make a nice score. I’ve played $6 Pick 3s (a bet that requires you to predict the winners of three consecutive races) in past years at Breeders’ Cup and hit for more than $2,500. Pick 3s can be tough but there are lots of wagers that don’t require a major investment that could also pay big money. Even doubles (winners of two consecutive races) often yield incredible returns. For example, the early Breeders’ Cup Saturday double in 2018 (Shamrock Rose in the Filly and Mare Sprint with Stormy Liberal in the Turf Sprint) paid $540 for a $2 bet!

We’ve touched on a few bet types that you might want to consider. Multi-race bets are always fun and potentially very rewarding but there are other bets you should consider, especially when you like a horse at odds higher than 6-to-1 (+700). Depending on how wide open you perceive the race to be (and if you think the favorite or favorites might finish outside the top three), a traditional win, place, and show bet is always a sound move. I’d suggest that for horses above 10-to-1 (+1100) always bet win, place, and show. If the odds are around 5-to-1 (+600) or shorter, I’d bet only win and place. If you’ve got some extra money to play with in a wide-open race and think a major longshot might round out an exacta with the horse you’ve selected, you can always “wheel” a horse with “all”, as in all runners in the race. What that means is that you’ll cash nicely if your horse finishes first or second, and if the other runner who completes the exacta is also a longshot.

This is going to sound obvious but be sure to handicap or analyze any race that you’re betting on … or find someone who has! You’ll be able to find all sorts of previews and analysis pieces on americasbestracing.net in the weeks leading up to Breeders’ Cup. Read those pieces. Also, if you’ve got the time, watch a lot of replays of the Breeders’ Cup Challenge Series, also known as “Win and You’re In” races. In watching replays, you’ll find horses who experienced adverse running conditions (who were perhaps blocked in or had to steady in a race) and who might be coming into the Breeder’s Cup under the radar because of a poor finish in their previous race or two. Identifying a horse or horses who figure to improve with a better trip is often the secret to unlocking huge payouts. Along the same lines, don’t simply dismiss any horse’s chances in the Breeders’ Cup because of one or two recent races in which they finished poorly. Oftentimes trainers and the people who manage horses will try to gradually work a horse up to a peak performance at the Breeders’ Cup. This is especially true for horses who’ve run well at the Breeders’ Cup or in major stakes races earlier in their careers.

At the end of the day, it’s always great to win a ton of money but it’s important that you enjoy the process of handicapping and watching the races at the Breeders’ Cup. As I alluded to earlier, there’s no shame in leaning on a friend or a group of friends to do the analysis required, and then partnering with them (or pooling your money) to bet the races. Betting “show parlays” can be a lot of fun. That involves everyone at your watch party or at the track with you to chip in a few bucks, bet a horse to show and then roll over winnings from race to race – assuming your horse(s) finishes in the top three. It’s a light-lift that’ll keep everyone in your group engaged while also allowing you to go off and grab a drink, socialize and then tune back in when it’s race time.