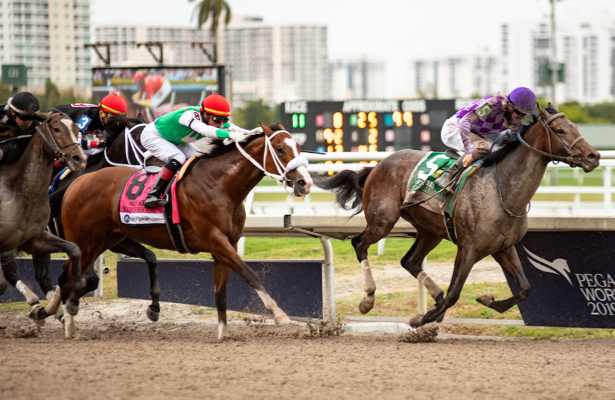 Harvey Wallbanger chose an opportune time to overcome his bout with second-itis.

The runner-up in a trio of races to begin his career, then a winner last November at Churchill Downs, the colt earned a trip to the Grade 2, $350,000 Holy Bull Stakes. He capitalized Saturday, running up the rail to the Kentucky Derby 2019 trail’s biggest upset yet.

Off at 29-1 at Gulfstream Park, the son of Congrats led a $1,101.70 exacta filled out by a 99-1 runner down the center of the track, Everfast. They converged on odds-on favorite Maximus Mischief in the previously unbeaten colt’s 3-year-old debut.

“3-year-olds change a lot,” McPeek said, “and when you’ve got one doing well, you’ve got a window of time to run in these kind of races. It didn’t look like a race that other than maybe the one horse on paper — his times were, to me, he needed to prove more.

“Adversity, which my colt overcame today, is what you’ve got to do in these kind of races.”

Maximus Mischief had never trailed at any call in his previous three starts, but Epic Dreamer sent from the gate to set the fractions in the Holy Bull, going in 23.16, 46.76 and 1:10.89. The favorite put a nose in front with just more than a furlong to go before swallowed up by Harvey Wallbanger and Everfast.

“Brian saved all the ground,” Lerner said. “We were hoping for a hot pace, get the right splits, and he just stayed on the fence.

“…We got home first, and we are really super thrilled about this.”

As for the name, you can order a Harvey Wallbanger, a variant of the screwdriver, or look back to replays of the orphaned buffalo by the same name and his racetrack exploits with horses.

Lerner took credit for the moniker — the colt is named after the drink — though he added that, “I took a little flack from my partners.”

“We’re going to look at the calendar and see where we’re headed,” Lerner added. “This was a huge win. Now he’s a graded stakes winner. I hope everybody has a Harvey Wallbanger later.”