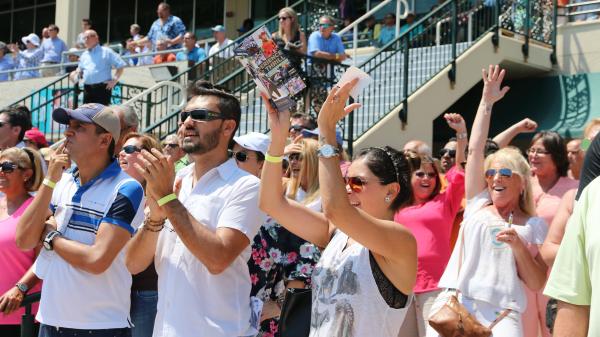 Uncovering a live longshot is no easy task. There are surely signs that a horse is poised for an improved effort, yet more times than not they are subtle and only become crystal clear after the fact.

The one common denominator, of course, is a large price on the tote board and sometimes it’s a mix of a horse’s current and previous odds that make it a highly inviting play.

In all likelihood there were no future champions in the field. It was merely a $60,000 starter stakes on turf for 3-year-olds who had started for a claiming tag of $35,000 or less.

Among the starters was Vow Me Now, who had finished third by a length and a half as the 5-2 favorite in a $35,000 starter allowance on Nov. 16 at Gulfstream Park West.

Off that effort, it’s hardly surprising that his odds were higher in the starter stakes on Feb. 18.

In fact, he was 10-1 in the morning line, which seemed fair. Yet when the wagering started, the odds on Vow Me Now began to rise appreciably. At post time, he was 28-1.

What’s the lesson? It comes from seeing that Vow Me Now had some trouble in his last race. In his past performances, it said he was steadied early on the backstretch run.

Did it cost him the race? Maybe or maybe not.

What matters more is that the Feb. 18 race offered handicappers a chance to wager on a horse who was 4-1 and 5-2 in his last two races against similar company, and may have had an excuse in his last race, and you can get him at 28-1 odds.

Value was the overriding factor here. At 10-1, Vow Me Now’s appeal would not have been as great. But at a price six times higher than his last start, when he did not have the best of trips, there was surely an intriguing reason to wager on him.

As said before in this space, a key element in finding and playing longshots is latching on to horses who offer a big enough reward to make the risk the acceptable.

In this case, even if its last race may have been more indicative of declining form than a troubled trip, at 28-1 it seemed a worthwhile gamble to back a horse who was just 4-1 in his last start.

Anyone who did had to be delighted when Vow Me Now grabbed the lead in the stretch and edged away to a 1 ¼-length victory.

He returned $58.40 for each $2 win ticket, a heckuva good price on a horse who was only 4-1 in its previous start and was opportunistic enough to turn in his best effort when the odds were too good to pass up.