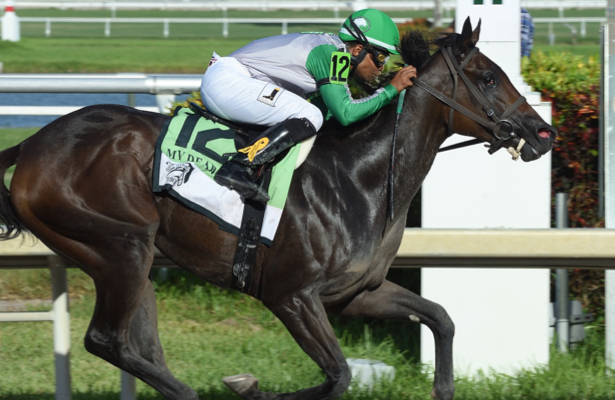 The 49th running of the 1 1/16-mile Gulfstream Park Oaks for 3-year-old fillies is one of seven stakes, four graded, worth $2.15 million in purses on a blockbuster 14-race Florida Derby (G1) day program.

Based at Gulfstream year-round with trainer Stanley Gold, Cookie Dough exits the one-mile Davona Dale (G2) Feb. 2 where she set a pressured pace as a 13-1 outsider in the field of seven and held it to the shadow of the wire before being caught by 51-1 long shot Jeltrin on the line.

It was the first race for the daughter of Brethren since sweeping the final two legs of the FTBOA Florida Sire Stakes series for juvenile fillies – the seven-furlong Susan’s Girl and 1 1/16-mile My Dear Girl – 28 days apart last September by a combined 14 lengths.

“She’s on schedule. She’s doing good. I’m looking forward to it,” Gold said. “She came out of the race excellent. I was happy. It kinds of burns you for a little while because I don’t think shortness had anything to do with it. We just got caught, but she’ll certainly be stronger this time with the race under her belt. She’s training good, she breezed good and it’s right around the corner, so I’m keeping my fingers crossed she stays just like she is.”

Cookie Dough entered the Davona Dale off a long space between races after coming down with pneumonia following a trip to Kentucky, which forced her to miss a planned start in the Breeders’ Cup Juvenile Fillies (G1) and spend two weeks clinic before returning to South Florida. She rejoined Gold’s string in mid-December.

“It’s gratifying because it was what we already knew. She’s kind of been under the radar,” Gold said. “She’s had bad luck. She missed the Breeders’ Cup, and I thought she was good enough. Let’s see if she gets it done this time, and that will kind of close it off.

“We’ve been overlooked and unmentioned since the race,” he added, “but, that’s OK. I’m not even thinking past this race. We’ll get through this and go from there.”

In the Davona Dale, Cookie Dough went straight to the lead from her inside post under regular rider Jeffrey Sanchez, setting fractions of 24.21 and 47.41 seconds, 1:12 and 1:36.83. Sanchez, aboard for each of the past five starts, gets the return call from outside Post 7; all fillies will carry 122 pounds.

“You expect when they’ve been off a long time and they’re coming in sharp and they’re going that distance that they’re going to be a little antsy and a little closer than you want,” Gold said. “That’s why you get worried they’re going to use up some energy and come up short on you, so I wasn’t surprised but that’s when you cross your fingers that she doesn’t burn out.

“They get a little anxious and they want to go a little too soon, and the jock’s in a situation where it’s like, ‘Do I fight with her and use her up or do I let her go and maybe use her up?’ He did the right thing and, heck, we got caught, that’s all,” he added. “She’ll relax better this time and she’ll be wherever Jeffrey wants to put her.”

Also returning from the Davona Dale is Six Column Stables and Randall Bloch’s Champagne Anyone, who got bumped at the start and raced near the back before making an outside move to get up for third, beaten 4 ½ lengths.

It was the first race for the Street Sense filly since her sophomore debut in the seven-furlong Forward Gal (G3) Feb. 2 at Gulfstream, where she came from next-to-last to be beaten less than a length while also running third.

“The filly came out of the last race with no problems and she’s really well,” trainer Ian Wilkes said. “She ran good. I just think she came off that really good effort first off the layoff and I think she may have been a bit flat and maybe I didn’t do a good enough job. You always question that, but I think she’s improved a lot.”

As the daughter of a Kentucky Derby winner, Champagne Anyone figures to improve as the races get longer, Wilkes said. The Oaks will be her second try around two turns, having run fourth in the 1 1/16-mile Golden Rod (G2) to cap her juvenile campaign last fall.

“The further the better for her,” Wilkes said. “You could even see in that last race, she was only getting warmed up at the end there. I’m hoping the two turns will be right in her wheelhouse.”

Chris Landeros, up for each of Champagne Anyone’s six lifetime starts, rides back from Post 5.

Stepping into graded company for the first time will be Eclipse Thoroughbred Partners and Stetson Racing’s Point of Honor, undefeated in each of her two career starts. By two-time Horse of the Year and 2014 Hall of Famer Curlin, she debuted with an off-the-turf maiden special weight victory going 1 1/16 miles Dec. 16 at Gulfstream.

In her last race, Point of Honor captured the one-mile, 40-yard Suncoast Stakes Feb. 9 at Tampa Bay Downs by 2 ¾ lengths following a three-wide trip under Hall of Famer Javier Castellano, who retains the mount from Post 3.

“She’s been training well all winter. We’re happy with her, and we look forward to seeing her run on Saturday,” trainer George Weaver said. “She hasn’t been beaten yet, so that’s what you have to do, run against tougher horses and see what you’ve got. She’s training well and doing really well, so we’ll just lead her over there and see what she does.”

Weaver said Point of Honor gave little indication of her ability while leading up to her unveiling, but he has been impressed by her results in the afternoon. In particular, he likes the maturity she has shown for a relatively inexperienced horse that has been favored in each of her first two runs.

“In the morning she trains fairly ordinary. She doesn’t do anything special in the morning, and never has, so it was a pleasant surprise how she’s jumped up and is two-for-two now. We’re excited to see if she can add to it,” he said. “She did do very well last time. She’s very professional, that’s one of her fine attributes. She knows how to rate herself and she knows how to move when it’s time to move.”

Based at the Palm Beach Downs training center, where she has breezed four times this month following the Suncoast, Point of Honor’s grandfather is 2006 3-year-old champion Bernardini, leaving Weaver optimistic about her future.

“All horses are different but she’s very classy, very professional, does everything right. We’re happy to have her in the barn,” he said. “She’s been doing well all winter and now it’s going to be up to her. I don’t know who’s going to run against her or what the competition is, but it really doesn’t matter. We’re looking to continue on with her 3-year-old campaign and see how far we can take it.”

Magic Stables’ Bella Ciao returns to stakes company after running second in an entry-level optional claiming allowance going one mile March 8 at Gulfstream, beaten 1 ¼ lengths. Prior to that she had run in five consecutive stakes, including a fourth in the Spinaway (G1) at Saratoga last summer in her third career start and a third in the seven-furlong Hut Hut Dec. 8 in her juvenile finale. Two-time defending Championship Meet leading rider Luis Saez, who has been red-hot winning 41 races this month, has the assignment from Post 4.

Trainer Dale Romans has won three of the last four editions of the Oaks, with Coach Rocks (2018), Go Maggie Go (2016) and Birdatthewire (2015). He will be represented by Frank Jones Jr. and Nancy Delony’s Shacklette, a winner of her last two starts at Gulfstream, most recently going a mile in a starter optional claimer March 13. Nik Juarez will ride from Post 2.