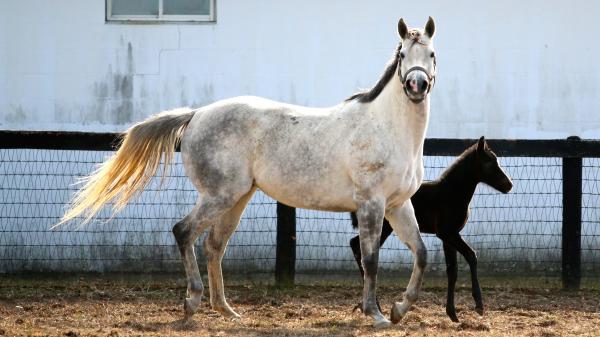 Thoroughbreds in North America all celebrate their birthdays on Jan. 1, so as soon as the New Year rolls around, so does “foaling season” – that magical time that lasts from the beginning of January through the late spring when racehorse babies are born. In this weekly piece, we’ll bring you the best of new arrivals to the Thoroughbred world. So sit back, relax, and take in the Cute Foals of the Week for 2019! Want to see cute foals in person? Be sure to visit Horse Country!

Now how’s this face for a mid-week pick-me-up?

Check out this uniquely marked My Golden Song colt out of Imperial Pomeroy, bred by Southwestern Racing, LLC and born at Valor Farm.

From tough to tender, champion Lady Eli has transformed, excelling at motherhood @HillnDaleFarm as she raises her flashy colt by @claibornefarm‘s War Front. https://t.co/ejVkG2FTw2 pic.twitter.com/h38rNzPEDe

#MDBred colt out of Wild For Love was feeling pretty full of himself after seeing his photo in today’s issue of @theTDN pic.twitter.com/LKVpQ5ykuM

Horse Country, where every day in the Spring feels like #EarthDay pic.twitter.com/AAIriSF5H2

#MDBred colt out of Wild For Love and #MDBred filly out of Campaign Vows are two of the first crop of foals from @WasabiStables nascent breeding program. Lots more on the way in 2020! pic.twitter.com/AezMcXTxsT

The year of the fillies and blazes continues for @LNJFoxwoods as baby #20 arrived today at Atlas Farm! A straight fire filly out of our mare American Lady! #straightfire #blazes pic.twitter.com/VwbO0sZG7V

We toyed with calling him Sox, but we settled on Oscar (the octopus- according to staff, due to his long legs). So here is Oscar, looking as flashy as his dad, Pearl Secret @BucklandsFarm with Mum, Vale of Clara. pic.twitter.com/c5rTtxl5Rt

#MDBred colt by Imagining out of Tuxedo Annie is just a really fantastic individual. Wish they could all look like this. pic.twitter.com/6o4OPl6Uvl

Lady Eli’s ‘scene-stealer’ foal: “He bounces around and acts like a little man, like a kid at private school waiting for the chauffeur to show up,” breeder John Sakura tells @full_stride.

Read about how the fiery champion mare has taken to motherhood https://t.co/mbluhTpzmp pic.twitter.com/GpH4KjqY4Z

My Lookin at Lucky colt out of Gritty Gal (War Pass) sure looks the part. I couldn’t be happier. @coolmoreamerica pic.twitter.com/4AloFtS0pm

Had a beautiful Jay Gatsby colt this morning out of my stakes winning mare Whisperdownthelane!! Natty is trying to figure out where that came from pic.twitter.com/8jXnYuQXC2

More gorgeous foals for G1 winning Millionaire Cupid! This colt out of Bid It Up was bred by Trahey & Kober & boarded at @FarmGlencrest. Winner of the G1 Gold Cup at Santa Anita, Cupid also won the G2 Rebel in a faster time than American Pharoah, Curlin & Will Take Charge! pic.twitter.com/oAyHXTbepa

Like us on our Facebook page and caption this photo there. Winning caption will win a Lane’s End hat #jointhefun pic.twitter.com/YaUBzbvFBS

UPDATE: This is the picture that Cindy and I have been hoping and praying for! Flat Out baby feeling much better today. Still needs to gain weight but he is nursing aggressively and eating whatever Mom will share with him. Getting his moxie back!! ⁦⁦@bergenstables⁩ pic.twitter.com/3QOz2tn9NS

Joy Waiting to greet me when I open the stall door. #TushieTuesday pic.twitter.com/LN8vLBD9TD

Please help us welcome the newest Woodford foal of 2019, a colt by @WinStarFarm‘s Exaggerator.

The winning KATURA had a handsome FED BIZ colt this morning. They are doing great. @WinStarFarm pic.twitter.com/dq4RFd3IMn

An Australia colt out of Group 1 winner Love Divine having a snooze this afternoon, he looks cosy @coolmorestud #lordshipstud pic.twitter.com/pGqX5UCfKO

Happy foal Friday ! Another beautiful filly by Value Plus out of Spokane Dancer for owners Tod Mountain Thoroughbreds pic.twitter.com/1yoGrnlFKx

Candy Ride/Lady Byng filly born 2/26. Lady Byng is a half sister to G2 winner Old Time Hockey, and is from Scat Daddy’s female family. She’s in foal to Mendelssohn. pic.twitter.com/PJzAN3S9pg

GRACELAND KITTEN had a good looking BODEMEISTER filly last night. Up in 23 min and nursing by 45 minutes old. @WinStarFarm pic.twitter.com/ve8KjDni1I

Proud of Paradise Woods!! (Pictured as a foal) Great to see her back. Born and raised ⁦@HiddenBrookKy⁩ ⁦@santaanitapark⁩ ⁦@TVG⁩ pic.twitter.com/zCS5D38aM8

Bonus Cute Animal of the Week:

Every week we feature another adorable animal in addition to our cute foals. This week, we have a very helpful doggie taking care of her little goat friends.