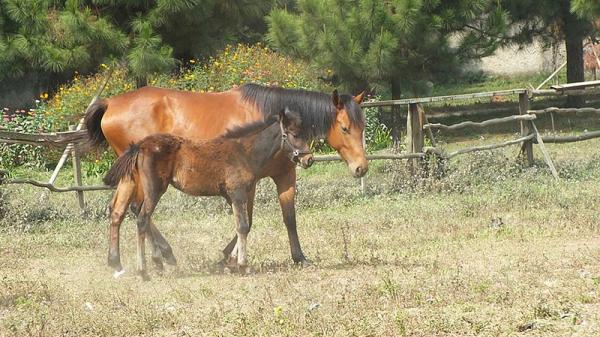 Thoroughbreds in North America all celebrate their birthdays on Jan. 1, so as soon as the New Year rolls around, so does “foaling season” – that magical time that lasts from the beginning of January through the late spring when racehorse babies are born. In this weekly piece, we’ll bring you the best of new arrivals to the Thoroughbred world. So sit back, relax, and take in the Cute Foals of the Week for 2019! Want to see cute foals in person? Be sure to visit Horse Country!

#FoalAlert: What do you get when you breed two horses that have won 35 races combined? One ROCKSTAR baby!

Even our foals tried to turn their noses up at this #rainday ☔️and stay in bed this morning! pic.twitter.com/akzDFCdxVO

The assistant was on hand for our latest arrival last night & is about to load his own mare to take for a cover with Havana Gold this morning. Busy boy earning his pocket money! #learningtheropes #tophelp pic.twitter.com/Kbv4GvwHQC

The thoughts of pretty much all Lexingtonians on the forecast of more rain tomorrow. #rainraingoaway pic.twitter.com/i1QOQ5mLEe

On the #FoalPatrol blog today: an update with With Honors and her filly at @claibornefarm as they move to the nursery barn! pic.twitter.com/jDrlAgWCXx

We had a big handsome GOLDENSCENTS colt last night out of the winning mare GRANNY RAMSEY.@spendthriftfarm pic.twitter.com/nMpnBoZ3uA

Stunner of a colt last night by ⁦@Three_Chimneys⁩ #GunRunner o/o G3pW Midnight Bliss. Pictured at 12 hours old. You just can’t draw it up any better. #futurestar #pabred Both mare and foal are doing great. Mare will be bred to ⁦@JuddmonteFarms⁩ #Arrogate in 2019. pic.twitter.com/9YAXAzFXyE

TRIPPING had a beautiful filly last night by EXAGGERATOR. Both are doing great today. @WinStarFarm pic.twitter.com/wGJ73Tf5Lf

Sunday’s are for recharging the batteries #farmlife pic.twitter.com/6U1FhiZbDn

I know we missed #FoalFriday – But we are too excited to not share our news! We are so glad to welcome into this world our adorable #StormyAtlantic filly that was born last night. She and Mo’sinthesandtrap, our Exchange Rate mare, are doing well! @HillnDaleFarm @Three_Chimneys pic.twitter.com/lftDPsTyP0

Kitten’s Joy colt out of Athenian is #7 for Green Lantern Stables!@HillnDaleFarm pic.twitter.com/aD4vw9qzSW

We had another stunning WE MISS ARTIE foal last night when ENDLESS FANCY had this 142lbs lovely filly. All the Artie’s have been fantastic! pic.twitter.com/r9WWnKuf7V

It’s a nap on your Mom’s alfalfa kind of day… #foalsof2019 #napping pic.twitter.com/OSoAYF1F4c

Always a great time of year! Our first foal of 2019 is a Colt out of #Paynter. Mare #SeaGazer and foal are both doing well.A big Thank you to Tina #SongHillThoroughbreds for all her help. pic.twitter.com/E0Mm9drXQM

What a pretty pair these two make! This is Hantaloop and her Candy Ride filly. #foalsof2019 pic.twitter.com/1XKnV8fHQu

Check out this foal from first crop sire Mastery! We have six on the ground and not a disappointing one yet. Positive comments continue to roll in daily from breeders. This colt is out of Relevant born 1/22 and comes from the family of Blame, Carve and Mucho pic.twitter.com/AtNZLiKNMM

Son of @LanesEndFarms’ Honor Code and his Super Saver mama enjoying a paddock to themselves the other day at @DecemberFarm. pic.twitter.com/O6gNU7K0gx

Love this picture I snapped from a @nmrhof #foalpatrol video of

We just had an outstanding American Pharoah colt out of our Distorted Humor mare Fontanne who’s from the family of War Chant & Hollywood Wildcat around lunchtime @coolmoreamerica @sharonhudon #foalwatch2019 pic.twitter.com/ZnOuI51H45

Drefong’s little brother by Curlin made his entry into the World last night… beasty boy!!! You can see his super fancy 2 yr old Candy Ride half sis @OBSSales @TopLineTBs in March!!!! pic.twitter.com/hLRqRNVg65

This colt by @CalumetFarm sire English Channel out of Secret Humor decided to brave the rain today and finally arrive! Congrats to breeder Willow Lane Stables @kuehl_john , he is a real looker! #Foals #rainydays pic.twitter.com/3jqdjIvoA8

A very nice first-crop #AmericanFreedom f. o/o #CauseShesFast, a winning Creative Cause half-sister to Kentucky #Oaks winner, Believe You Can. Bred in the purple with conformation to match. Contact @CormacCB to inquire about American Freedom #ThinkAboutIt pic.twitter.com/kRlDNk0NOw

A little leg talking to first….. ‘Are you ready legs?’ …. ‘We’re going up’! #firststeps #babysteps pic.twitter.com/VkB8qGseyz

Happy Wednesday, and in this case Happy Birthday, to this strong colt by Hootenanny. First foal out of a Niagara Causeway mare. #HumpDay #Birthday pic.twitter.com/I1B9MRyDcI

Just think, we’re one month away from the First Day of Spring! pic.twitter.com/sZSrQPSSh2

Another really nice foal from the first-crop of Midnight Storm. Bred by Gale Ho’o, the mare is booked back to Midnight Storm again this year pic.twitter.com/jFoWCFgySC

Well we had another beautiful new arrival this afternoon. St Trinians had a big beautiful chestnut filly by California Chrome. She is by far the biggest foal we have had so far. @TaylorMadeSales pic.twitter.com/RV0SjX74YY

At just a few minutes old, my colt out of Kimberly Jean is ready for his close up! #WarDancerFoals #AMEStud pic.twitter.com/MeUMlqsN1l

This colt by Quality Road out of Gone Callin is making the most out of this sunny morning! pic.twitter.com/ayI5RCsvDW

The Grey Hare colt by @spendthriftfarm sire Palace was jumping for joy to see the sun today! #foals #sunshine pic.twitter.com/HofxQJtVbo

Another foal was born at GreenMount Farm last weekend! This #MDbred filly is by Midshipman out of Lemon Patch.

This #MDBred colt by Imagining will be a month-old on Saturday — his dam has a date tomorrow with Quality Road’s son Blofeld. Read why we’ve paired Tuxedo Annie with Blofeld here: https://t.co/kt2c3G57Fh pic.twitter.com/uJbt9OXvgy

This dude is 10 days old. This is his first day out. Based on my experience, he should not be with us. I have never had a red bag, septic, dummy foal get as far down as him and bounce back. My wife and my vet have informed me that I’m not allowed to sell him. #HolyBossTough pic.twitter.com/D0vPgVt0tH

19 Golden Ballad (by Distorted Humor) is 2 weeks old today. He’s grown up a lot in that time. His favorite pastimes are chasing photographers out of the field, biting, and sliding in the mud. We’ve got our hands full with this one, folks! #bonnechancebred pic.twitter.com/rxXlBonl66

Hellooooo! The first foal of the year arrived here on Tuesday morning. A colt by Elzaam out of Sesmen. pic.twitter.com/RBVJ0J9B95

Our 2019 colt out of Mo d’Amour (Union Rags) is THRILLED it’s #FoalFriday! pic.twitter.com/vFFMt0Oott

The weather may be dreary and the fields may be muddy but that certainly hasn’t put a damper on the spirit of our new foals! This sassy filly is by Medaglia d’Oro out of Enhancing and is a 1/2 to 2018 Ky Derby runner Instilled Regard. @DarleyStallions #FoalFriday pic.twitter.com/tUsaRzAoG9

Something is in the water in Santa Ynez….all we are having are flashy chestnuts ⚡️. All by different sires too. Enjoy some of the cute faces from this week #foalfriday #strongmandate #champpegasus #dadscaps #lea pic.twitter.com/6mNEP5Wwdk

Great 1st couple of weeks on foaling rotations @WinStarFarm Bringing 14 of these lads and ladies into the world, trying to help them get their sea legs #FoalFriday @FlyingStartNews @lizabhendriks pic.twitter.com/jTV4zATDaO

Happy #FoalFriday from some of the babies here at the farm!! pic.twitter.com/BG1GzTUHpH

Happy #foalfriday! After a slow start to the foaling season we’ve been gaining momentum the past few days welcoming five new foals into the world. One of those foals is this stunning filly by @LanesEndFarms stallion HONOR CODE. #foalalert #foalsof2019 pic.twitter.com/Obcm2PK3SK

My Dynaformer mare and her 2019 foal, a colt by @LanesEndFarms’ stallion LIAM’S MAP pic.twitter.com/NCGi5PH6H5

It’s girl central here to start the year with 14 fillies and 8 colts. We have 60 to go so plenty of time for the boys to catch up pic.twitter.com/ovC7TlDZc3

Baby #4 Jack Milton o/o Salander born 1:55am right just before the big rain storm came through…he trying hard to get up but couldn’t figure how to use his long legs!

Can someone hold my butt please!” pic.twitter.com/RfIgRx1cjj

Bonus Cute Animal of the Week:

Every week we feature another adorable animal in addition to our cute foals. This week, we have an incredibly bouncy little kid:

This video will make you want to adopt a goat. pic.twitter.com/fk8smxVaLN