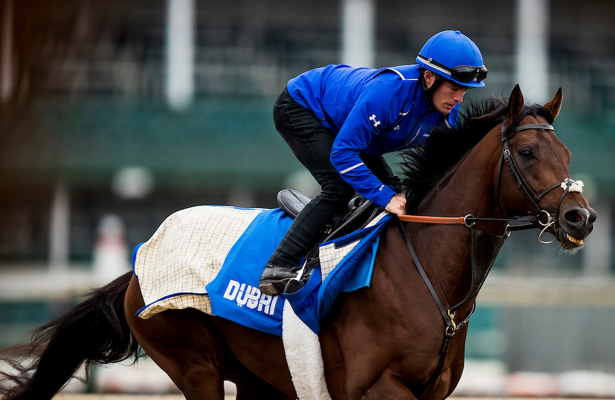 It would seem the local contingent has an edge on the Americans shipping in for Saturday’s Group 1, $12 million Dubai World Cup, for which a field of 13 was assembled to go 1 1/4 miles and cap a blockbuster card at Meydan.

Post positions were sorted Wednesday, with this race carded as the last of nine. Look for it live on TVG in the early afternoon — we’ll update with the official time once available — or you can live stream it through advanced deposit wagering services such as NYRABets.

Rather than the traditional pill pull draw used domestically, connections were selected to pick their posts, with the middle gates at a premium. Among the last to go was the Thunder Snow camp, with the defending race winner hung wide. Meanwhile, the race favorite North America appears set to gun it from a more inside position.
Odds below are courtesy of Bet365. If planning to wager into the United States’ pari-mutuel pool, expect some larger prices on the longshots — and perhaps some shorter ones on the better-known American runners.

1. Gunnevera, 14-1: He exited this race a year ago with a hoof injury and is still looking to break through in a Grade/Group 1 event. Over what is normally a speed-favoring surface, the known closer could be up against it as far as a win goes.

2. Capezzano, 5-1: A 9 1/2-length winner of the Al Maktoum Challenge Round 3, this Kentucky-bred son of Bernardini has looked like a new horse at age 5. He likes to go early, with trainer Salem bin Ghadayer saying the addition of a hood has calmed down his charge.

3. North America, 10-3: He’ll be looking for the lead early after having trouble at the break last year. Enters off wins in the Al Maktoum Challenge Rounds 1 and 2, with the former a nine-length victory that announced him as the one to beat here.

4. Audible, 12-1: Since returning from a layoff, he’s 1-for-3 but caught a wet track in those defeats. How about a trip around the world to avoid the rain in the desert? He could be a live longshot but runs against the bias as a closer.

5. Seeking the Soul, 13-2: Second to City of Light in the Pegasus World Cup (G1), he continues to show plenty of spacing between starts. Also a runner-up in the Breeders’ Cup Dirt Mile, could this horse be looking at a new lifetime best Saturday?

6. Pavel, 33-1: Fourth here a year ago, he adds blinkers for trainer Doug O’Neill. Perhaps that will put the son of Creative Cause in the race earlier — and could give him the edge over some other American runners as a superfecta player.

7. Gronkowski, 25-1: Since bursting on to the American scene with a runner-up to Justify in the Belmont Stakes, his form has dropped off. The Lonhro colt showed some mild late kick in his Dubai debut, running fifth in the Al Maktoum Challenge Round 3.

8. Axelrod, 25-1: A Phoenix Thoroughbreds Charge formerly campaigned in the U.S., this 4-year-old was a no-show in his Dubai debut, running 10th of 11 on Super Saturday in the Burj Nahaar (G3). He has competed in Grade 1 races from seven to 10 furlongs.

9. New Trails, 16-1: Was North America geared down or tired out as New Trails chased him down in the Al Maktoum Challenge Round 2? The final margin was a narrowing 2 1/4 lengths. Still, this son of Medaglia d’Oro didn’t offer as much next time on Super Saturday.

10. Yoshida, 8-1: Having run most of his career on turf, the dirt tries certainly stand out with a win in Saratoga’s Woodward (G1) and a nice fourth in the Breeders’ cup Classic. This has long been a target following the Pegasus World Cup Turf (G1).

12. Thunder Snow, 7-2: He ended his layoff with a runner-up in the Al Maktoum Challenge Round 3, but then again, took that same pattern into a Dubai World Cup victory a year ago. He’s looking to become the first two-time winner of this race.

13. Dolking, 20-1: South Korea’s hope, as his trainer, Simon Foster, said, went “from being a novelty item earlier in the Carnival to being placed in a Group 1.” Before third in the Al Maktoum Challenge Round 3, he won a lower level race at 10 furlongs.