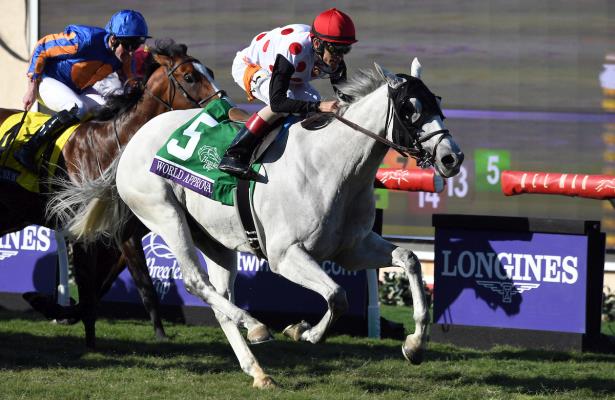 Live Oak Plantation’s homebred World Approval, Eclipse Champion Turf Horse of 2017 and winner of that year’s Breeders’ Cup Mile at Del Mar, has been retired from racing, it was announced Tuesday.

The gelded 7-year-old son of Northern Afleet, the last foal produced from the blue hen mare Win Approval, will take up residence at Live Oak Stud in Ocala, Florida. World Approval will reside in an adjoining paddock to his dam and his multiple Graded stakes-winning siblings Revved Up and Za Approval.

“How lucky we have been at Live Oak Stud/Plantation to have championed such a winning family,” said Live Oak’s Charlotte Weber. “I am proud and privileged to have experienced this Sport of Kings with such outstanding racehorses and shall protect them as we grow older together.”

World Approval rattled off three consecutive Grade 1 victories to close out his 2017 campaign. He captured the Foustardave Handicap (G1) at Saratoga by 2 ¼ lengths in August and followed that with a 2 ½-length score in the Woodbine Mile (G1) in September before defeating an accomplished international field under John Velazquez in the Breeders’ Cup Mile for trainer Mark Casse. World Approval notched his first Grade 1 win in 2016, taking the United Nations Stakes (G1) at Monmouth Park.

A stakes winner in four consecutive seasons (2015-2018), World Approval recorded the first stakes win of his career in the 2015 Sophomore Stakes at Tampa Bay Downs. The Oldsmar, Florida, oval was also home to his final stakes score, a win in the 2018 Tampa Bay Stakes (G3).