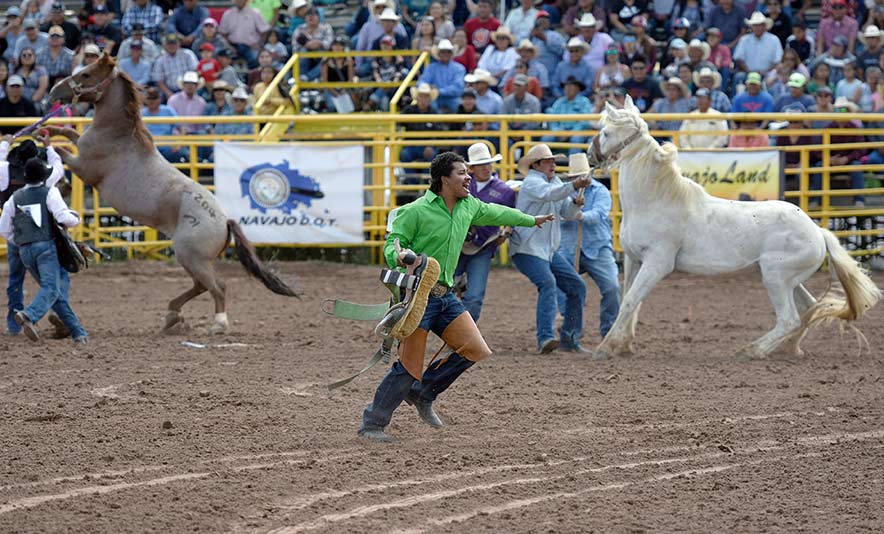 The stock used for this year’s wild horse race during the Navajo Nation Fair was beyond measure.

In Sunday’s championship round, six would-be teams lost their animal in the melee with Team Chizzie emerging as the event winners.

“The horses that were used this year were real strong,” Team Chizzie shankman Brandon George Begaye said. “I raced a couple of times this week and I actually lost a horse this week.”

Begaye said losing a horse is part of the game.

With the ornery horses battering their handlers in Sunday’s finals, Begaye said they were fortunate to tame their equine as his brother Bryan George Begaye and his cousin Daniel Etsitty celebrated the win afterward.

“I have to give credit to all the horses,” he said. “They performed very well this week. They should be given the same props we’re getting.”

Etsitty, who was the team’s rider, echoed those sentiments. The Black Mesa, Arizona, cowboy said the horse they had gave them plenty of trouble.

“It’s never easy,” he said. “That horse made us work and today it played into our hands.”

That was far from the case for Etsitty as he drew that same horse earlier last week during Tuesday’s slack performance with a different team. Needless to say, that wild equine got the best of them.

In Sunday’s finals, however, he exacted some revenge on him.

“Everything went well and I got a chance to bring home some hardware,” he said.

Etsitty said he’s won the Navajo Nation Fair a couple of times with his last one coming about four years ago.

“I really don’t keep track of it but I really enjoy this,” he said.

Like Etsitty, Brandon George Begaye has won this numerous times but winning this year’s title was pretty special.

Bryan George Begaye said he feels blessed to have won the wild horse race with his brother and cousin.

“We won this as a family,” he said, while adding that everyone on their team stayed the course and did their part.

“It takes a lot of teamwork,” he said.

His brother chimed in by saying they withstood “all the chaos” that’s involved in wild horse racing.

“If you can work through the chaos you have a good chance of winning,” he said. “We kind of steered away from that but it wasn’t easy, per se. Our horse didn’t shut down right away. It was moving around and it threw its head up.”

Nonetheless, they kept their emotions in check to overcome the odds.