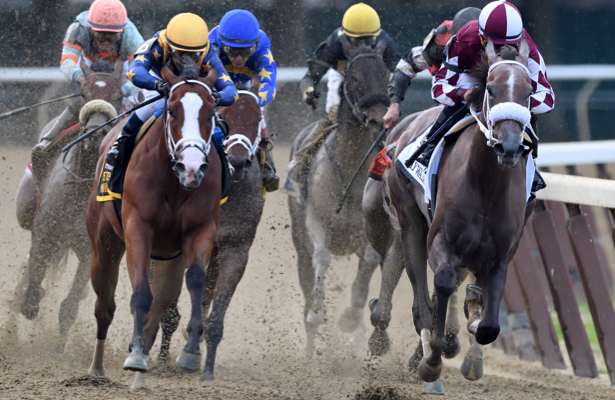 Mention “the big horse” these days to Chuck Zacney, the man behind Cash is King stable, and he could go on to discuss either a colt or a filly.

While unbeaten Maximus Mischief comes up on his 3-year-old debut in Saturday’s Holy Bull (G2) at Gulfstream Park, Jaywalk, the recently crowned champion, has her path to Churchill Downs mapped out as well.

“We’ve got it scripted,” said Zacney, who owns the daughter of Cross Traffic with D. J. Stable. “Hopefully it turns out well.”

John Servis-trained Jaywalk is working toward a season debut on March 2, in Gulfstream Park’s Davona Dale (G2) at seven furlongs.

“If everything goes well there, we’re going to go to the Ashland,” Zacney said, “and then hopefully we’re in the Oaks on the first Friday in May.”

Cash is King and Servis followed the same race pattern in 2016 with Cathryn Sophia, who won the Davona Dale, ran third in the Ashland (G1) at Keeneland and rebounded with a victory in the Kentucky Oaks.

The ownership group rose to prominence in 2005 when it campaigned the dual classic winner Afleet Alex. Since then, its graded stakes winners are 2010 Withers Stakes (G3) hero Afleet Again, Cathryn Sophia, the Remsen (G2) winner Maximus Mischief and Jaywalk.

Purchased for $190,000 as a yearling, Jaywalk has won four straight races since defeated in her debut, including the Frizette (G1) at Belmont Park and Breeders’ Cup Juvenile Fillies under the Twin Spires.

Despite the resume, Zacney said he was “nervous as hell” at last week’s Eclipse Awards. Newspaperofrecord, the dominant Breeders’ Cup Juvenile Fillies Turf winner, presented a challenge for the championship.

“She is a really nice filly, but to be honest, I thought we had the credentials,” Zacney said. “We had the Grade 1s. We had the earnings at different tracks and distances. So I think it made sense for us to get it, but sometimes you just never know.”

The vote didn’t end up close. Jaywalk received 214 of a possible 249 first-place votes.

Now the focus returns to racing.

“She acts the same and looks the same,” Servis said after Jaywalk returned to the work tab on Jan.  11. “She maybe got a little bit taller but, other than that, she hasn’t changed much at all, to be honest with you. She put on a little bit of weight, which is good.”

Based at the Palm Meadows Training Center, Jaywalk, a gray or roan filly, has seen her third breeze of the year delayed due to weekend rains that turned the dirt sloppy and grass soft on Pegasus World Cup day.

Jaywalk drilled five furlongs Tuesday in 1:00.80, fourth of 34 workers at the distance.

“We still have plenty of time getting to the March 2 race,” Zacney said. “John’s thrilled. She put on a little weight, and we’re looking forward to a really terrific 3-year-old campaign.”