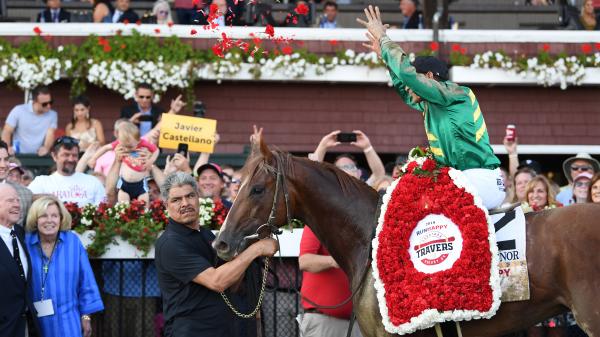 HITTING TARGET: Hall of Fame trainer Shug McGaughey said he always managed Code of Honor with an eye toward having him in peak form for the Travers. “I wanted a summer horse,” he said after an impressive three-length score. He noted that he made up his mind before the Kentucky Derby Presented by Woodford Reserve that he would not run in the Preakness Stakes or Belmont Stakes Presented by NYRA Bets unless Code of Honor brought home the roses. That decision was made for him when Code of Honor was elevated to second in the Derby following Maximum Security’s disqualification for interference. In choosing to run in the Grade 3 Dwyer Stakes on July 6, which turned into an easy victory, McGaughey made sure his colt was fresh for the “Mid-summer Derby.” Suffice it to say he could not have played his hand any better.

SECOND AGAIN: The addition of blinkers resulted in a different running style but the same exasperating result for Tacitus, who finished second in the Travers just as he did in the Belmont Stakes and the Jim Dandy Stakes Presented by NYRA Bets. Instead of coming from off the pace as he had before, regular rider Jose Ortiz said the son of Tapit put himself in the race as he tracked Mucho Gusto in second. He outfought Mucho Gusto only to have Code of Honor blow past. “I wouldn’t change anything. I love the blinkers,” Ortiz said of the changes. He expressed confidence that an elusive Grade 1 victory can be achieved at some point. “He’s still moving forward,” he said.

RESOUNDING ANSWERS: Although Midnight Bisou entered the $700,000, Grade 1  Personal Ensign Stakes Presented by Lia Infiniti with a perfect 5-for-5 record this year, she still had major questions to answer. Could she win at Saratoga after finishing second in the Coaching Club American Oaks and third in the Alabama Stakes last year? Could she win at a mile and an eighth, a distance at which she showed one second-place finish and two third-place finishes in three previous tries? She answered both with an exclamation point of a victory, eking out a nose victory against Elate in a ding-dong duel. “I’ve ridden a lot of great mares and she is catching up by leaps and bounds,” jockey Mike Smith said. “She’s just getting so good.”

WAY TO REBOUND: Hall of Fame trainer Steve Asmussen watched with a sense of overwhelming relief as Mitole rebounded from a rare defeat in the Alfred D. Vanderbilt Stakes to take the $600,000, Grade 1 Forego Stakes Presented by Encore Boston Harbor by three lengths in a stakes record of 1:20.80 for jockey Ricardo Santana, Jr. The previous mark of 1:20.99 was set by A.P. Indian in 2016. Mitole’s third-place finish in the Vanderbilt had snapped a seven-race winning streak. “I think the circumstances for the Vanderbilt just didn’t suit him, coming off the huge run in the Met Mile and cutting back to three quarters (of a mile),” Asmussen said. “But he came out of the race in good shape, trained beautifully for this, and the results speak for themselves.”

IN GOOD FORM: Vino Rosso owns five victories in 13 career starts for earnings of more than $1.3 million but is winless in three starts at Saratoga. He looks to break through in the $750,000, Grade 1 Woodward Stakes Presented by NYRA Bets next Saturday and turned in a promising workout toward that end. Vino Rosso fired a bullet five-furlong work, zipping five furlongs in 58.60 seconds on Saratoga’s main track Friday morning, the fastest of 22 horses covering that distance. “He had a very good work,” trainer Todd Pletcher said. “It seems like he’s been in good form based on what we saw.” Stablemate Noble Indy turned in the second-fastest five-furlong drill (59 seconds) as he prepares for the $250,000, Grade 2 Bernard Baruch Handicap on Sept. 2, the closing day of the meet.