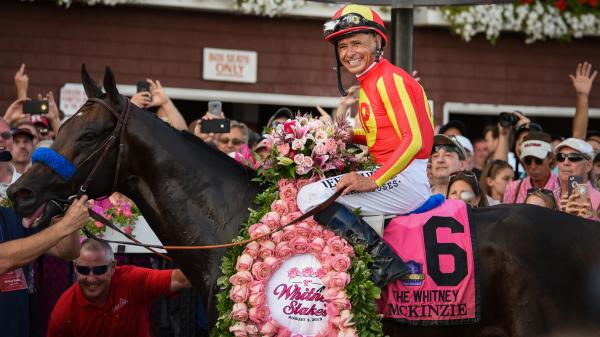 Tom Pedulla presents five key takeaways from the 92nd running of the Grade 1 $1 million Whitney Stakes, a Challenge Series “Win and You’re In” qualifying race for the Breeders’ Cup Classic, and other developments on Saturday at Saratoga Race Course:

QUEEN OF SARATOGA: Marylou Whitney, the beloved “Queen of Saratoga” who died on July 19 at age 93, was on the minds of everyone in racing throughout “Marylou Whitney Day” on Saturday. Fans were asked to wear pink to honor the celebrated owner, breeder and philanthropist. Her accomplishments were remembered during a video tribute that preceded the 92nd running of the Whitney. Mike Pegram, part of the ownership group of Whitney winner McKinzie, summarized the passing of a legend with one well-chosen sentence. “We lost somebody who is going to be irreplaceable to racing,” Pegram said.

EYEING THE CLASSIC: Hall of Fame jockey Mike Smith was extremely encouraged about McKinzie’s prospects in the Breeders’ Cup Classic on Nov. 2 at Santa Anita Park after the colt’s impressive 1 ¾-length victory in the Whitney. “He felt better than he ever had,” Smith said. “I knew he was going to jump all day.” McKinzie, tracking in second, easily made the lead turning for home and powered home in the 1 1/8-mile contest with minimal urging from his rider. “The best part of it was the end of the race. That gives me more confidence going a mile and a quarter down the road,” Smith said, referring to the Classic distance.

GRADE 1 WINNER: Covfefe worked like a Grade 1 winner preceding the Longines Test Stakes – and now she is one. Covfefe outdueled game Serengeti Empress by half a length in the Test in a reflection of how well she worked at Churchill Downs in preparation for the seven-furlong race. She zipped six furlongs in 1:11.20 on July 19 before blazing four furlongs in 47.80 seconds a week later. “Her last two works at Churchill were phenomenal,” said trainer Brad Cox. “I knew when we turned for home we were going to get as good a Covfefe as we could get at this point of the year.”

WOODWARD-BOUND?: Catholic Boy, a Grade 1 winner on dirt and turf, remains a possibility for the $750,000, Grade 1 Woodward Stakes Presented by NYRA Bets despite some unexpected setbacks following his runner-up finish in the Grade 2 Suburban Stakes on July 6 at Belmont Park. “He came out of the (Suburban) with a couple of cuts. It took them a little longer to heal than I would have thought initially, so we’ve been very easy with him, just trying to let him regroup. We’re resuming serious training now,” said trainer Jonathan Thomas. The 4-year-old ridgling galloped for the first time over Saratoga’s main track on Saturday morning, one day after arriving from Belmont Park. Catholic Boy is expected to breeze next weekend.

ALSO WOODWARD-BOUND?: Tom’s d’Etat is under serious consideration for the Woodward after an impressive decision in the Alydar Stakes on Friday. “He certainly did it the right way (on Friday), so we’ll take a long look at him this week and see how he comes out of the race,” said trainer Al Stall, Jr. “The next logical spot would be the Woodward, but we’ll see.” Although he is 6 years old, injuries have limited Tom’s d’Etat to 13 starts, seven of them wins. “Everything has been so minor. He’s got clean legs. There is no heat or inflammation,” the trainer said. “He just had bone bruising and stuff like that.” If Tom’s d’Etat is good to go for the Woodward, he would be aiming for his fourth Saratoga victory.