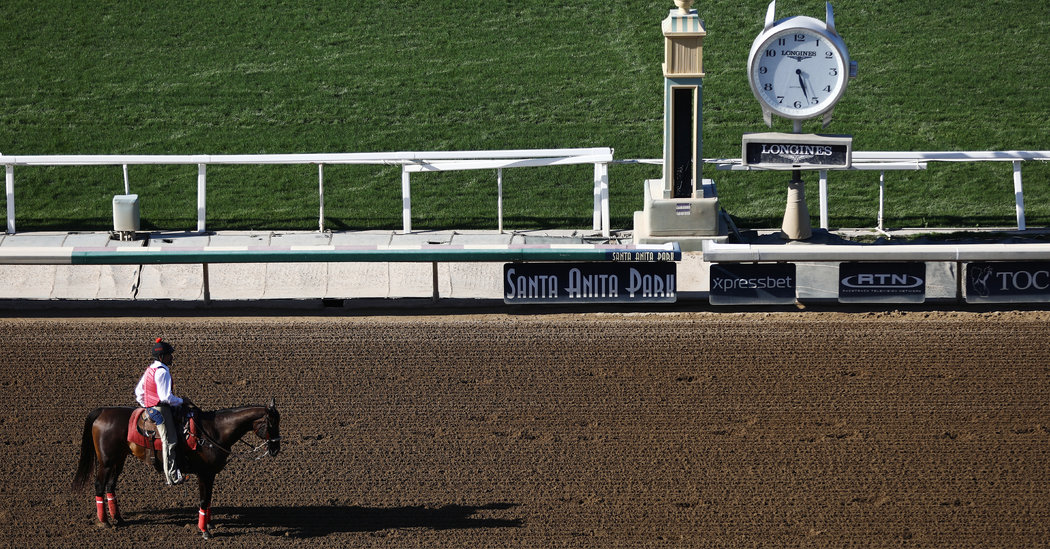 Gov. Gavin Newsom of California said Monday that horse racing is dangerously close to being out of business in his state and suggested he would curb horse owners and breeders with direct financial interests in the sport from serving on its regulatory board.

With Santa Anita Park returning for its fall season on Friday after 30 horses had to be euthanized on its premises over six months, and on the heels of the revelation that 2018 Triple Crown champion Justify had failed a drug test before the Kentucky Derby that regulators made disappear, Newsom said he was going to appoint a new leader to the regulatory board and hold the group accountable on matters of drugs, safety and integrity.

“What happened last year was unacceptable, and all of the excuses be damned. We own that going into the next season, and we’re going to have to do something about it,” Newsom said at a meeting with reporters for The New York Times. “I’ll tell you, talk about a sport whose time is up unless they reform. That’s horse racing. Incredible abuses to these precious animals and the willingness to just to spit these animals out and literally take their lives is a disgrace.”

California racing officials spent four months investigating Justify’s failed drug test in the 2018 Santa Anita Derby that should have prevented the horse from starting in the Kentucky Derby. The delay was long enough for Justify to not only compete in the Derby, but also win it, along with the Preakness and Belmont Stakes.

After the Triple Crown winner’s breeding rights had been sold for $60 million, the California board — whose chairman at the time, Chuck Winner, had employed Bob Baffert as a trainer — disposed of the inquiry behind closed doors. It happened in an executive session, an approach the board’s executive director had not previously taken during his five-and-a-half-year term.

Winner left the board the day before The Times reported how a lack of transparency kept the failed test from the public. Two other commissioners, including co-chair Madeline Auerbach, own and breed horses with trainers and jockeys that they regulate.

In a letter to The Times released on social media, a lawyer for Baffert, W. Craig Robertson III, said that Justify’s positive test for the banned substance scopolamine had been the result of “environmental contamination.” The explanation given was that Justify ate jimson weed. Robertson offered no evidence of contamination; neither did California regulators when offered the opportunity to respond.

Scopolamine can be used to help make a horse more efficient by clearing its airway and optimizing its heart rate. Cases involving the substance have resulted in disqualifications, purse reimbursements, fines and suspensions over the decades.

The quantity of the drug found in Justify suggested that it was not the result of feed or bedding contamination and that it was intended to enhance performance, according to Dr. Rick Sams, who ran the drug lab for the Kentucky Horse Racing Commission from 2011 to 2018.

Newsom has recently appointed three commissioners with no direct financial ties to the sport and said he will use the same standard for the upcoming appointment of a new chairman.

“We are pulling away from those with direct conflicts and pulling out a more objective oversight capacity,” he said.

The Los Angeles district attorney is investigating the deaths at Santa Anita, and the state legislature has held hearings and considered changes to improve how horses are treated and tracks regulated.

Newsom also said the public is far more aware of the abuses and ample death toll in the sport — 10 horses a week die on American racetracks, according to the Jockey Club, a figure considered conservative because not every race venue reports fatalities during training hours.

“The more you realize what’s really going on, the more intolerant you become of certain behaviors,” Newsom said. “If you don’t reform yourself, you’re going to get run over and others are going to reform for you in ways that you don’t like.”