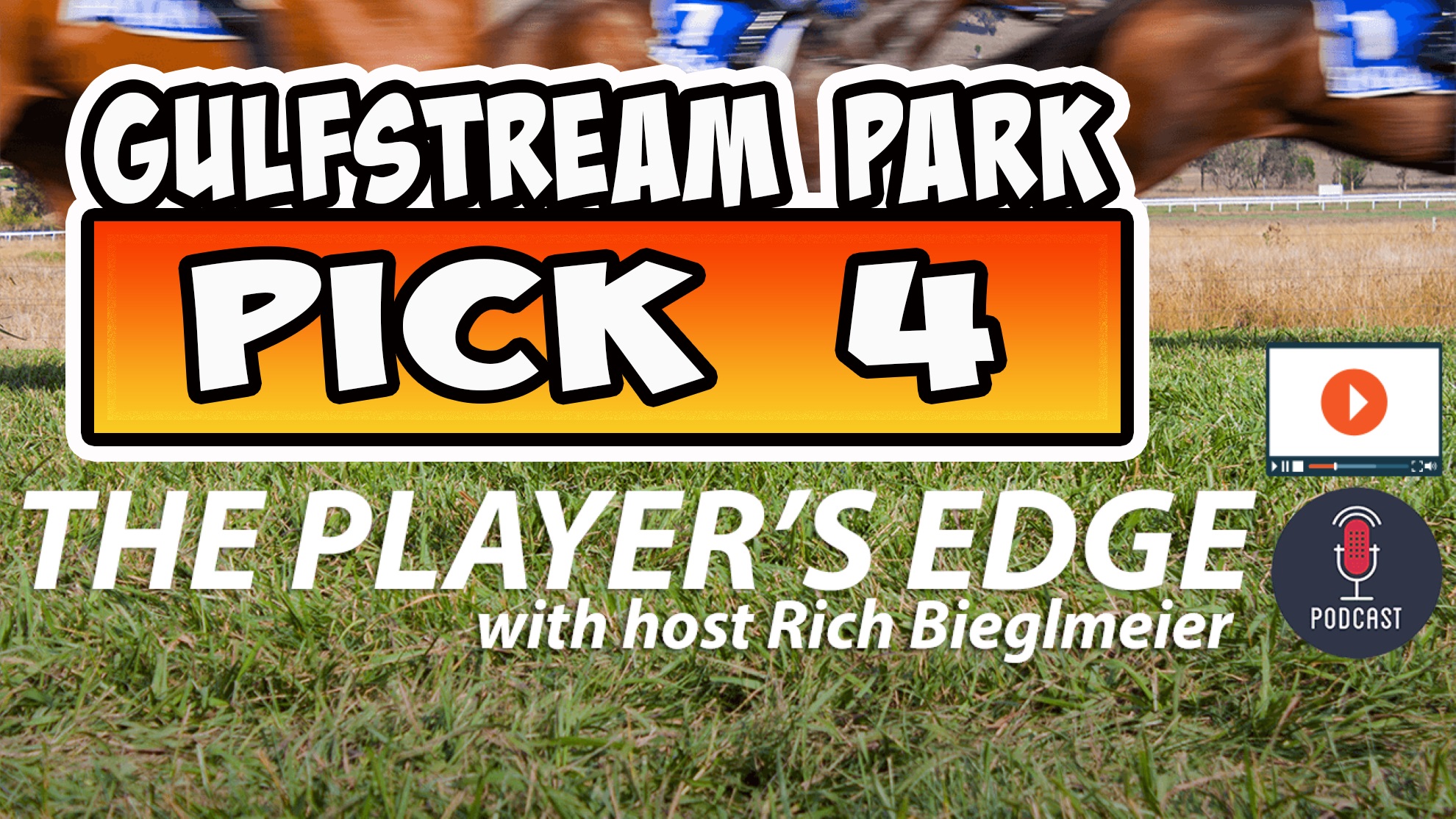 #9 – Xy Speed has won two races in a row and now drops in class today. He likes the distance winning nine out of seven races and is two for two at Gulfstream Park.

#2 – Bad Beat Brian keeps closing to just miss winning, running 2nd in his last race he is improving in each race.  He has finished 80% of the time in the money this year, winning 30% of the races. He has one of the highest last race speed ratings in the race.

#10 – Discreet Tune has won two of his last four races running second in the other two this year. Should improve while returning to the Turf and at a shorter distance. The Trainer Carlos David in last 14 days has this record (6 2-0-1).

#4 – The Connector has won eight out of twenty-two career races and has his best turf speed is fastest among today’s starters.

#8 – Miles Ahead returns finished second only losing by a neck at 5 furlongs and now stretches out to seven furlongs which will help his closing style. He switches to a high % jockey Paco Lopez, has the highest speed figure at today’s distance and his best dirt speed is fastest among today’s starters. He has a good 4F workout on 24Nov GP 4f ft :46.4 Bg2/64.

#9 – Well Defined had plenty of trouble in his last race which affected how he finished. He does well at today’s distance finishing seven out of nine in the money, winning four races. His Best Dirt Speed is fastest among today’s starters (tie).

#3 – Financial System just missed in his last race at Gulfstream Park. High % trainer Saffie Joseph, Jr. wins 31% of the races when bringing a Beaten favorite back to the races. The Trainer/Jockey combo in last 14 days has this record (11 6-0-3).

#6 – Star Sign comes in from Parx to try Gulfstream Park for the first time. He likes the distance winning two out of two races and has the highest last race speed rating.

#10 – Hanalei’s Houdini – I believe this race is all about the distance and this horse has shown that today’s distance will prove to be no obstacle. I think he was claimed in the last race with this race in mind.

#6 – Strike Appeal has won five out of his last seven starts at Thistledown and comes to Gulfstream to try and extend his winning ways. He has the best dirt speed is fastest among today’s starters.

#4 – Clear Vision has won his last two starts on the turf at today’s distance and the trainer wins 100%: when shipping a horse to a new track. His best turf speed is fastest among today’s starters (tie) and a good workout 4F workout (Nov-26).

#8 – Max K. O. is within a nose and a neck of winning his last five races. Should improve while returning to the Turf and the trainer wins 31% of the races when bringing a beaten favorite back to race.  Trainer /Jockey combo in last 14 days has this record (11 6-0-3).

#3 – Attentive just missed winning Finishing 3rd in his last start and now gets Chantal Sutherland in the irons a very good aggressive jockey. He has a good 4F workout 29Nov GP 4f ft :47.3 B. 2/13

PACE PROJECTION: Like you would expect a ton of speed in this 5 furlong sprint.

#9 Xy Speed– Will be behind a couple horses but should get a nice trip from an outside post. Loves the distance winning 6 of 7 with a second. Turf overall has won 7 of 9 with a second and third. Also likes Gulfstream winning 2 of 2.  Gets Paco Lopez for the first time.

#5 Henry’s World– Will be part of the fast pace but who better to have riding a speed horse than Edgar Zayas.  Zayas is 3 for 3 with this horse. Has finished in the exacta in half of his 12 Gulfstream starts and half of his 16 races from this distance.

#3 Harry’s Ontheloose– Won 2 races in a row on the turf before going to the synthetic now gets to return to preferred surface of the turf. Decent numbers at the track and distance and typically around at the end.

PACE PROJECTION:  The early leader will be one of the following three horses. #3 Financial System, #9 Well Defined, and #11 Legal Deal. If one of these horses gets a clear lead look out.

#3 Financial System– Likes a fast track winning 3 of 4 races with a second. 3 of those races are at Gulfstream and he is 2 for 2 at the distance. Will have other speed in the race but not too much so should get a nice trip and if things go his way up front will be really hard to beat.

#11 Legal Deal– Another that could be part of the pace but has won off the pace before. The outside post will help. Edwin Gonzalez has been on this horse twice got a win and a second.  Has won 6 of the 12 at Gulfstream.

#8 Miles Ahead– If ready to go after a 3-month layoff will be dangerous. Workouts suggest he is ready. Does well at track winning 7 of 15.  Has won 3 of 4 races with Paco Lopez aboard.

PACE PROJECTION:  Lots of speed in this race as much as half the field will go for the lead or be up close. #1 Ludington, #3 Girlamo’s Attack, #4 Tune In, #6 Strike Appeal, and #9 Mo Hawk all could be part of the early pace.

#3 Girlamo’s Attack– Has won 3 straight races at Gulfstream.  The only 2 times Zayas has been aboard which were the last 2 races were wins.  Has won 4 of 8 at Gulfstream hitting the board in all 8. Will be a part of the pace but does not need the lead. First time going this far would be the only concern.

#5 Glory of Florida– Has finished in the exacta in his last four fast dirt track starts. Will come from about mid pack and there is enough pace in here for that to be a good spot.

#4 Tune In– Has been really sharp this year winning 6 of 9 races and hitting the board in every race. Has speed but doesn’t need the lead Leonel Reyes has been aboard this horse six times has won 4 of them and getting second in the two other races.

PACE PROJECTION: There is a couple horses in here who might show speed but the one from the rail #1 Mid Day Image looks to be the speed of the speed and he’s going to be sent from the rail.

#1 Mid Day Image– Should be the speed of the race from the rail. Will get Paco Lopez for the first time. Has won 6 of 11 career races on the turf including 3 out of 4 at Gulfstream.  He is also 2 for 2 at the distance.

#11 Light Fury– Will be up near the pace. Going from 2 synthetic races back to turf.  The trainer is 4 for 20 with a positive ROI going from dirt to turf. Has had some really good workouts since last race a little over a month ago.  Has won 5 of 10 at Gulfstream and hit the board in 9 of 10. Has also won 2 out of 3 at the distance with a second.

#10 Mandate– Has won back-to-back races at different tracks at double digit odds.  Both those races Andrew Wolfsont was aboard, and he will be again today. Will be coming from mid pack and closing late. Has won at Gulfstream before as he is 1 for 3 there.

Since claimed, 2 wins from 5 starts

Used AW race to prepare for this race and then layoff

Steady works but nothing special (normal)

Negative – the Turf Sprint race was a step up and failed to do no better than 5th. This race was without Lasix.

3 works at track at 5f on dirt – ok works, prep for this race

Gaining in last race and needs to move earlier

Mike Maker claimed this horse before and the last claim was a drop from 62.5k to 40k

Claimed for 25k and move up to handicap and won

Paco Lopez has the mount and won with this horse before

Really nice work of :46.4 from the starting gate – one of his best works based on the pattern of races

Has won at this distance once from 3 tries

Layoff the August to October with a needed race

Claimed for 62,5k and won at this level after claim

Trainer has good record with 2nd race after layoff with 33% win and 59% in the money with positive ROI. Trainer has started only 38 this year with his horses

Only 1 win at distance

Won on both dirt and turf

Like many of these horses, 1 1/8 is a distance not run before

Speed, should be are front runner and won last 2 doing just that

Working out at Palm Meadows on the turf course, 2 works

Completive in most of his races except the allowance company races

Has 4 wins at the distance

Claimed last out by Mike Maker for 40k, ran 3rd losing by ¾ L

9 runs, 6 in the money finishes including 2 wins

Mike Maker claimed this horse before