No kings showed up to help save the embattled sport of kings in Pleasanton on Thursday, but a bunch of older fellows with Daily Racing Forms in their back pockets did.

And what’s happening to their sport is a stickier situation than the cotton candy they sell at the Alameda County Fair.

A new state law signed by Gov. Gavin Newsom on Wednesday allows state regulators to shut down a problem racetrack on the spot — legislation rushed through this week following the deaths of 30 racehorses at one Southern California track this season.

The horse racing diehards — and that’s the only type that show up at a county fair track on a Thursday afternoon — conceded that their sport needed to be made safe. No one spoke up against the new law.

“You’re going to have accidents in anything,” said Roger Siebers of Pleasanton, chomping on his second corn dog while he went over his picks. “What can you do?”

“I know it’s a difficult situation,” said Doran Burrow, a retired builder from Livermore who said he’s been coming to the Pleasanton track every fair season since 1954. “But it’s part of the sport. I’m going to stay with it.”

Despite the deaths, and the banning of a longtime trainer who lost four horses to the fatal bone fractures euphemistically known as “breakdowns,” racing went on very much as usual at Pleasanton on Thursday. The fellow in the red coat called the critters to the post with his bugle, the hooves chewed up the dirt and the losing bet slips — torn and shredded by their ill-fated purchasers — fluttered to the ground in the light breeze. 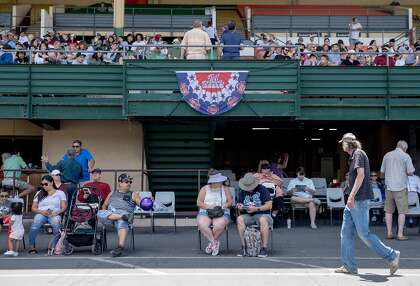 “We’re just a bunch of retirees who like to get together and watch the horses go around,” said Larry Castillo of Union City. “I love the action and the noise and the sight. Let’s face it, accidents are part of it.”

“I don’t know if these horses elected to be racing machines. I’m sure these horses would rather be frolicking in the pasture, eating grass,” said Tim Butler, who said he has been betting on horses for half a century and supports more regulation of the sport.

“Thirty dead horses is too many,” said Pat Campion of Pleasanton. “It’s terrible. It’s horrible. Horse racing is struggling. It’s down right now. We have to do something.”

“Is it worth killing horses to have fun at the track?” wondered Claire Ashby of Hayward. “I suppose if they took away horse racing, we’d be OK.”

Signs of change were everywhere. Before the first race, Pleasanton fans were obliged to watch a new video on a giant screen in the middle of the track. The video showed pictures of horses being lovingly groomed, tended, examined and washed while actress Bo Derek gazed into the camera and declared them to be “happy horses” doing what horses were made to do — run fast.

Veteran track bartender Jerry Unger remembers watching the aftermath of a horse breakdown a few seasons ago. It happened a hundred yards or so from his bar, near the finish line.

“The horse buckled and fell,” he said. “Everyone groaned. It was awful. They brought out an ambulance and they covered the horse with a white sheet and a tent. They didn’t want anyone to see what was happening.”

“But the horses are athletes, and athletes can get injured,” he said.

Horse racing at a county fair track like the one in Pleasanton — which was built in 1859 and is said to be among the oldest in the U.S. — is unlike horse racing at Golden Gate Fields in Albany or Santa Anita in Arcadia. Included at the fair are the usual gamut of prize-winning bunnies and jams, miracle non-stick pans, $5 Ferris wheel rides, giant teddy bear games (“must trade for larger prizes,” said a sign), and any number of deep-fried food items — Twinkies, Oreos and Snickers bars — that are delicious primarily in contemplation.

Missing from the fair entrance gates early on Thursday were animal rights protesters who say horse racing is a cruel spectacle that ought to be discarded like yesterday’s Racing Form. In the past, many have come from the Virginia-based group People for the Ethical Treatment of Animals, whose website says racehorses are “supported by ankles the size of a human’s, whipped and forced to run and… are the victims of a multi-billion dollar industry that is rife with drug abuse and injuries.”

Racehorses were not the only animals on the job at Pleasanton. Pigs raced on a race course of their own, ponies carried toddlers around a small ring, a boa constrictor slithered in a cage and 400 butterflies fluttered inside a giant tent. For $3, a fairgoer could feed sugar water to orange butterflies with a cotton swab and then watch butterfly wrangler John Dailey release new butterflies to replenish the stock.

A butterfly, he said, can move at speeds that rival a racehorse. It can go 30 miles an hour if it wants to, although it doesn’t want to very often, and hardly ever in a straight line.

Mistreatment of an animal, whether horse or butterfly, is an abomination, Dailey said.

“We don’t permit butterfly abuse here,” he said. “We teach people how to interact with live creatures. They’re all important.”