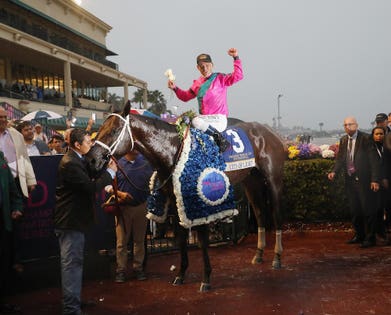 This past Saturday Pegasus World Cup once again offered a refreshing new take on the very traditional sport of horse racing. Guests from all over flocked to Gulfstream Park to see some of the world’s finest horses and jockeys compete, with City of Light taking home the $4 million grand prize. From the afternoon to evening myself and other attendees watched the races, placed bets, enjoyed bites and cocktails from two of Miami’s hottest restaurants Swan and Komodo, and danced in the nightlife pop-up designed by LIV Miami. It was a great way to spend a day or even a weekend in Miami to experience what many say is “the race of the future.”

Jockey Javier Castellano and horse City of Light at the 2019 Pegasus World Cup.Photo by Alexander Tamargo/Getty Images for The Stronach Group

That’s because Pegasus is not your stuffy, old-school horse race of yesteryear, something I immediately noticed beginning with the fashion. Men rocked stylish jackets instead of suits and ties, and women’s oversized hats were replaced with well-coiffed blowouts. Belinda Stronach, Chairman and President of The Stronach Group is the mastermind behind Pegasus and not only wants to modernize the sport but attract a new legion of fans. “We want to engage the next generation by combining a whole experience of entertainment, music, great food, hospitality and a seamless digital experience,” says Stronach. “Imagine it as a great day party meets horse racing and wagering.”

With tickets ranging from $60 to $1000, Pegasus was appealing to horse race novices and aficionados alike. It also brought out a bevy of celebrity guests. I spotted actress Bella Thorne, model Caroline Vreeland and artist Alec Monopoly there. Following the day’s races, guests and celebs headed to the Pegasus LIV Stretch Village, the race’s pop-up trackside club where guests could listen to DJ Mark Ronson spin and later see Snoop Dogg perform.

The event was somewhat of a homecoming for DJ Mark Ronson who earlier in his career frequently spun at Miami nightclubs before becoming an Oscar-nominated producer. He DJed for over an hour and finished his set with a remix of “Shallow,” the song he’s currently nominated for a 2019 Oscar for “Best Original Song” for.

Snoop Dogg was the headlining performance of the evening and even he couldn’t deny the unique appeal of a modern horse race in Miami. “There’s so much flavor in Miami alone bringing this level of horse race here just adds another level of prestige to the city,” he told me. Earlier in the evening, he had put his own stamp on the “riders up” command. He shot $100 replica bills covered with his face and “In Dogg We Trust” emblems into the crowd to gear up the audience for the race. At his show later in the evening, he performed favorites like “Drop It Like It’s Hot” and “Gin and Juice.”

Snoop Dogg performs on stage at the 2019 Pegasus World Cup at Gulfstream Park on January 26, 2019 in Hallandale, Florida.Photo by Alexander Tamargo/Getty Images for The Stronach Group

The LIV nightlife experience was developed under the watchful eye of nightlife magnate David Grutman. “This was our second year teaming up with Pegasus and we really took it to a new level with killer performances by Snoop Dogg and Mark Ronson to give guests a taste of LIV,” Grutman told me.

Thinking about making a trip to Pegasus in 2020? One thing to note is that the event takes place in Hallandale Beach which is located between Miami and Fort Lauderdale further north than some of the most famous landmarks you associate with a trip to Miami. The Diplomat is a great place to spend the weekend as it’s close to the race track but with its oceanfront location also allows for a day at the beach before or after the race. With their expansive spa, it’s also an ideal place to get pampered and prepped before the event with a manicure/pedicure or one of their facials. Their detox facial is particularly helpful if you just arrived on a plane, especially from a cold destination.

Hosted every January, Pegasus is an extraordinary way to spend a day for Miami residents and visitors from elsewhere alike. The event is a direct reflection of Miami with great entertainment, hospitality and style at the forefront. That’s why this race attracts a dynamic crowd that’s slightly different than at other American horse races. “This is much sexier than the Kentucky Derby,” Stronach told me with a smile.