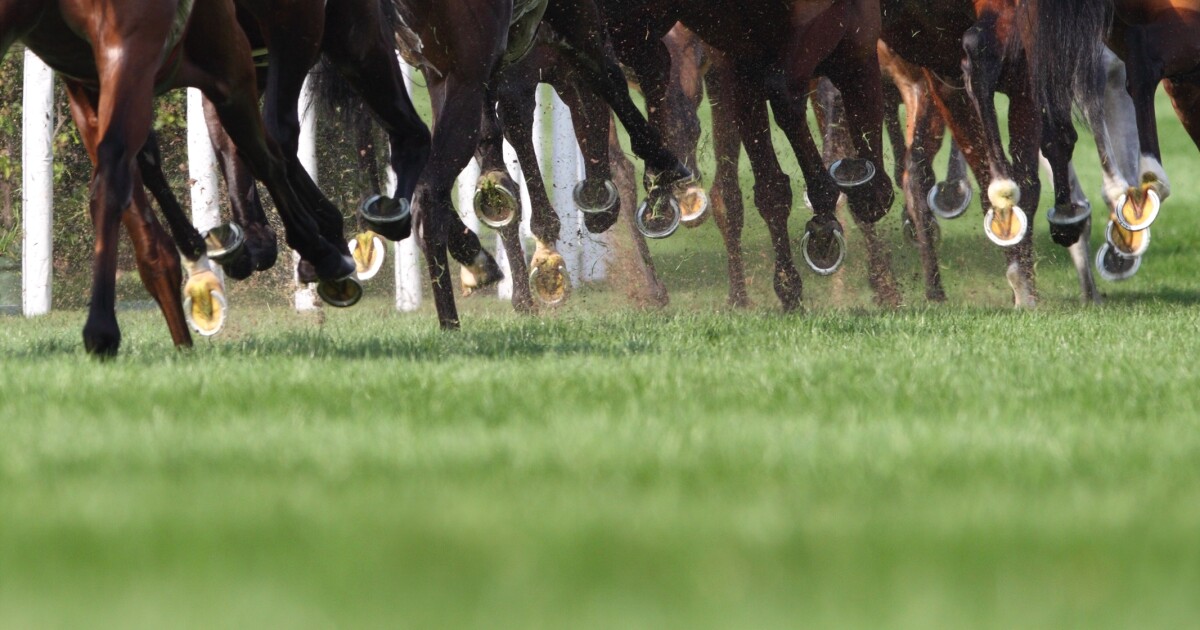 Hello, my name is John Cherwa, and welcome back to our horse racing newsletter as we have another handicapping lesson from Rob Henie.

It’s time for our weekly contribution from Ron Flatter of the Vegas Stats and Information Network. He takes a look at the jockey roulette that is going on because of the races in the Middle East. Ron, what insights do you have?

“Who knew that a new $20 million race for older horses in a land far away would have such a big impact on the Kentucky Derby trail?

“Saturday’s Saudi Cup has not only lured horses, owners and trainers to a mysterious ‘equestrian field’ in Riyadh, but it has also attracted a significant chunk of the American jockey colony.

“Two-time reigning Eclipse Award winner Írad Ortiz Jr., Hall of Famer Mike Smith and three-time classic winner Joel Rosario were joined by Luís Sáez, José Lezcano and Rafael Bejarano on flights to the Middle East. That adds up to six riders who will not be at Gulfstream Park for Saturday’s Fountain of Youth Stakes, the next points prep for the Kentucky Derby.

“’They’re going to miss the next round, too,’ said Dale Romans, who trains Fountain of Youth morning-line favorite Dennis’ Moment. ‘The Florida Derby is Dubai World Cup day (March 28). It’ll be interesting to see how all that sorts out.’

“Since Ortiz is riding Mucho Gusto in the Saudi Cup, he will not be on Dennis’ Moment. Romans summoned Flavien Prat from California to ride for him in Florida. Prat also rides Thousand Words for Bob Baffert, so Derby assignments may yet turn into a game of musical horses.

“Sáez usually rides Remsen winner and Withers runner-up Shotski. But since he will be on likely Saudi Cup favorite Maximum Security, trainer Jerry O’Dwyer had to replace him for the Fountain of Youth. He landed Hall of Famer John Velázquez, who did not have a Saudi Cup assignment this weekend and has not had a Dubai World Cup ride in three years.

“Smith rides Midnight Bisou, and Rosario replaced Smith last fall on McKinzie. They both ride those horses this weekend at Riyadh and could be back on those same mounts next month at Meydan.

“Because it has been around for a quarter century, the Dubai World Cup has created an annual dilemma for jockeys who must choose between the promise of a big, overseas payday and their loyalty to horsemen who provide them a living back home in America. The addition of the Saudi Cup complicates this choice and, by extension, the road to Churchill Downs.

“This year the Florida Derby is the only points prep that falls on the same date as Dubai World Cup night. If Maximum Security stays in the Middle East, Sáez might be right back there next month – and not on Shotski or any other horse that day at Gulfstream Park. That also means that Sáez might cost himself the ride of his choice in the Kentucky Derby.

“It may be a moot point for Ortiz if he sticks with Thousand Words and for Smith if his lean is to Honor A.P. Both Baffert colts may race their final Derby preps in April.

“Horseplayers may want to take these dilemmas into account when they invest in Derby futures. When they bet, for instance, on Dennis’ Moment, are they getting Ortiz or Prat on May 2? That may seem like a choice between filet mignon and chateaubriand, but it is not insignificant.

Ron Flatter is a host and reporter who covers horse racing for the Vegas Stats & Information Network, which is available at SiriusXM 204 and to subscribers at VSiN.com. On the current episode of the Ron Flatter Racing Pod, trainer Saffie Joseph Jr. talks about Chance It’s bid to win Saturday’s Fountain of Youth Stakes at Gulfstream Park, Florida. Horse Race Insider’s John Pricci handicaps the race and also discusses the push to shorten the 10-year drug suspension of trainer Rick Dutrow. To listen, just click here.

“A maiden special weight at a mile on the turf, 3-year-olds in February, lightly raced, some starting back up in their 3-year-old year, others trying to find a bit better, while the rail runner is making her first start. Lots to consider as we’re seeking the runner who’s entering this one with that extra angle, possibly presenting a better opportunity than the others. With that in mind, we’re not enamored with any of those who’ve run, thus, top selection is STAR OF AFRICA (#1), debuting for Paddy Gallagher. First off, the drills are quicker than normally seen from Paddy, and that’s where the placement becomes interesting. Typically, when he works his runners up to their first start, the drills are on the slower side, so the fact this one’s been working in a speedier fashion, is interesting in itself, but then, we throw in the fact he’s sending her long off the quick set, leads us to believe she’s not only quick, but she’s also settling well justifying the longer assignment, facing straight maidens, with excellent long time turf rider Jose Valdivia given an opportunity. REDUCTA (#2) is healthy, making her fourth straight start since Dec. 1, always a good thing to see, as good health opens the door to good efforts. She exits a decent heat on Feb. 1, a better group than the #4 horse LUCIA’S DESIGN exits, now returned to a flat mile, with Abel Cedillo a strong fit from just off the leaders.

“5 Lookintogeteven – Will take some play, but she needs to hard ridden, not the type of horse we typically like to back, while her style would seem more conducive to a more methodical assignment such as 1 1/16 miles.

The West Coast Handicapping Report can be found at http://www.westcoasthorseracing.com It has been endorsed by leading trainers, handicappers and industry sources.

Really not much to review, so we’ll look at the only non-claiming race on Friday’s card, the fifth, a maiden special for horses going 1 1/8 on the turf. The winner was Border Town, the odds-on favorite, who took the lead coming into the stretch and won by 3 ½ lengths for trainer Richard Mandella and jockey Flavien Prat. Border Town paid $4.20, $2.80 and $2.10. Commanding Chief was second and On East Street finished thord.

The highlight of Saturday’s nine-race card may be the introduction of the Golden Hour Double, which links the last races at Santa Anita and Golden Gate Fields. It’s goal, of course, is to breath some life into a stagnating mutuel handle. The enticements are a 15% takeout, $50,000 minimum pool and its minimum wager is $5. As we wrote last week, the $5 ticket is a big throwback to when there weren’t exactas on every race and the trifecta was restricted to dog tracks.

The card starts at 12:30 p.m. and has decent sized fields and one stakes race. Four of the races are on the turf. The feature is the $100,000 Pasadena Stakes for 3-year-old fillies going a mile on the turf. The favorite is Smooth Like Strait at 3-1 for trainer Michael McCarthy and jockey Geovanni Franco. She won the Cecille B. DeMille at Del Mar but was fourth in the Eddie Logan at Santa Anita as the favorite. She is two-of-five lifetime.

Hariboux is the 7-2 second choice for Jeff Mullins and Umberto Rispoli. She is four-of-nine lifetime and finished ninth in the Cecille B. DeMille and second in the Eddie Logan. She ran he first five races in England.

Gregorian Chant won his debut race in Dundalk, Ireland not too far from where I grew up. He then shipped to the U.S. and won the debut here. After running in a Grade 3 at Del Mar this summer he hit the bench and returned to run protected Jan. 20 under Joel Rosario. The horse dueled and briefly took the lead into the stretch before fading to sixth. Trainer Phil D’Amato races the horse protected again Saturday and he is 20% second off the bench. 15-1 is great value today. Horses priced over 5-1 have won this race 40%.

Friday’s result: Mulholland Highway tracked nicely throughout the race and into the turn looked like a good move was coming. Alas the horse ran out of steam and ran fifth to the favorite who no one was catching.

Ciaran Thornton is the handicapper for Californiapick4.com, which offers daily full card picks, longshots of the day, best bets of the day.

He was a longshot in the 110-yard Blink Of An Eye Stakes, but this runner benefits from a strong jockey/trainer combo and has done well at this short distance, winning once and finishing a close second when beaten a neck. Two races ago, My Favorite Cartel faced much tougher rivals in the (G1) Brad McKinzie Winter Championship when running sixth. Offers a nice price and can surprise with a solid getaway.

I love getting new readers of this newsletter, and you certainly can’t beat the price. If you like it, tell someone. If you don’t like it, you’re probably not reading this.

Either way, send this along to a friend, and just have them click here to sign up. Remember, it’s free, and all we need is your email address, nothing more.

Any thoughts, you can reach me at [email protected]. You can also feed my ego by following me on Twitter @jcherwa.

Now, the stars of the show, Friday’s results and Saturday’s entries.

IRISH SPIRIT sped to the early lead, set the pace inside, inched away on the second turn, came off the rail into the stretch, drifted out a bit in midstretch then drifted in late and won clear under urging. T BONES TRICK angled in and saved ground stalking the pace, loomed up along the rail in the drive but could not catch the winner while clearly second best. SALAH stalked three deep then outside a rival on the second turn, came three wide into the stretch, drifted in late and bested the others. MONGOLIAN LEGEND hopped slightly in a bit of a slow start, jumped the mirror image passing the wire the first time, chased inside then a bit off the rail on the backstretch, angled back to the fence on the second turn and weakened in the drive, then jumped the mirror image again at the wire. TYRANNICAL REX stalked outside a rival then between foes, bid alongside the winner early on the backstretch then stalked again, continued alongside a foe on the second turn and also weakened.

CLASSY ATLANTIC stalked a bit off the rail, came three deep into the stretch, bid outside the runner-up in midstretch to gain the advantage past the eighth pole and won clear under a vigorous hand ride and steady handling late. DEARBORN angled in and dueled inside, inched away in upper stretch and drifted out despite right handed pressure in midstretch, could not match the winner but held second. POINT HOPE (IRE) bobbled at the start, chased inside then a bit off the rail, went around a rival into the stretch, came out in upper stretch and gained the show. WISHFUL broke a bit slowly, settled just off the rail then angled in leaving the backstretch, saved ground thereafter and did not rally. UNTOUCHED ELEGANCE angled in and dueled outside the runner-up, fought back on the turn and weakened in the drive.