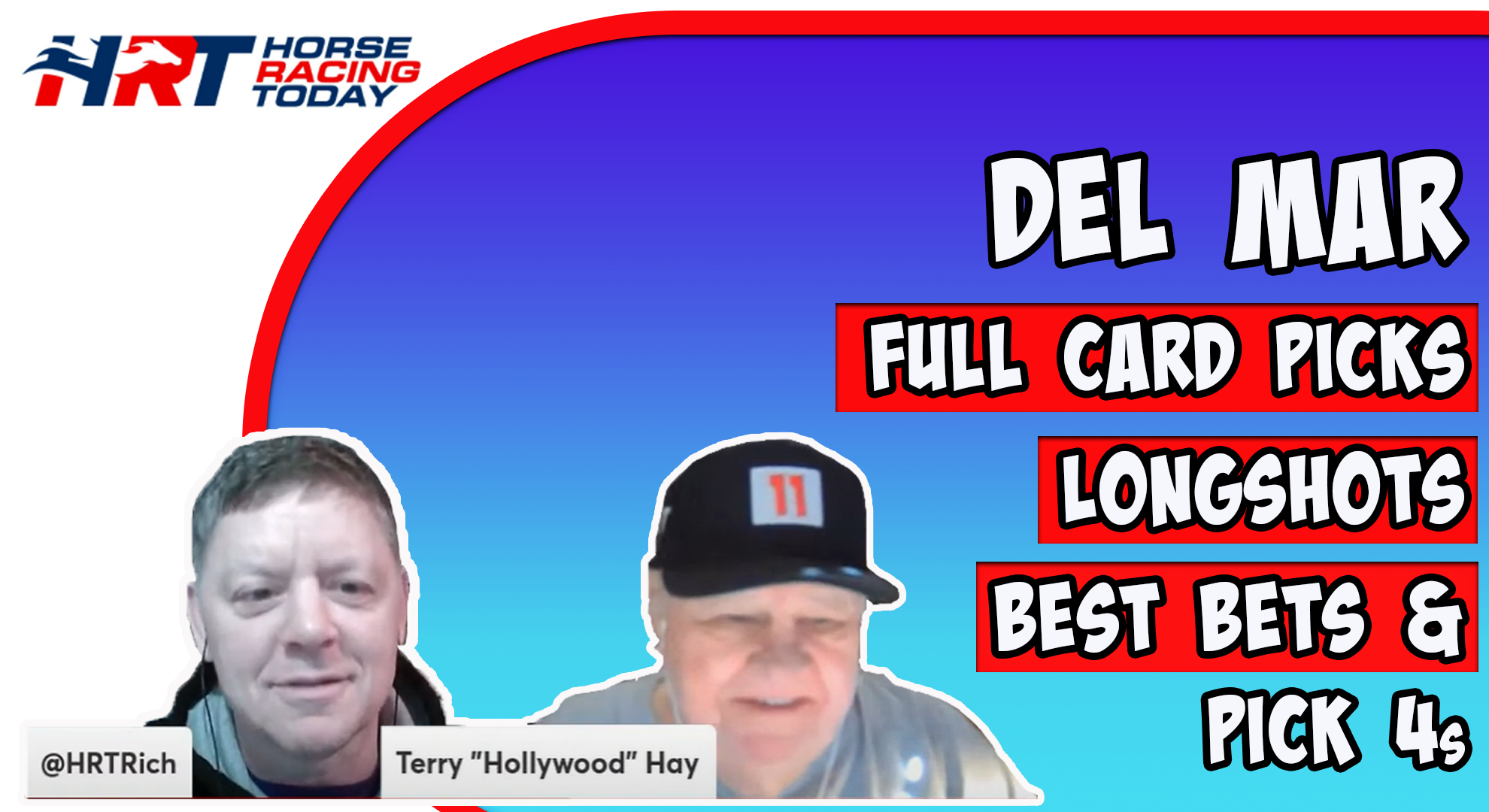 5 – Bochombo – He finished 6th in his last race after being brushed in the stretch, switches to a high % winning jockey and his best turf speed are fastest among today’s starters.

1 – Heaven Shines – He comes in from Northern California after finishing in the money in seven in out of the last eight races, he has the highest last race speed rating, and the rail post is winning at 22% clip.

6 – Winter Falcon– Another one in from Northern California after finishing in the money in three in out of the last five races, winning two and now trying turf for the first time.

2 – Street Art – He likes to go to the front so the cut back in distance will help.

3 – Cajun Treasure – He finished in the money 100% of the time last year at Del Mar, winning one of the races and drops in class today.

4 – Paint Me Lucky – He ran 2nd in his last race, drops down 2+ classes today where the trainer wins 23% of the races with this drop-in class.

2 – Family Biz – He finished in the money in the last four races, winning one and improving his speed rating in each of the last three races.

1 – Cross Examine – He is a first-time starter who was purchased for $475,000, his Dam has 1 winner from 3 starters, the breeding suits today’s sprint distance and he has a good 5F workout Jul-23.

5 – Arickaree – He ran 2nd vs similar in last race and his best dirt speed is fastest among today’s starters.

4 – Arrest – He has the highest last race speed rating and a good 4-furlong workout on 20July at Del Mar.

6 – Buttonwood Tree – He drops down 2+ classes today where the trainer wins 38% of the races doing that.

7 – Redline – He won his last race at Santa Anita, drops in class today after the win and the trainer wins 75% of the races when dropping a horse off a win and he has a good 5F workout on July-23.

8 – Maven – He has won three races on the turf and at a today’s distance – Veteran Mike Smith is in the irons.

6 – Elevado – He won his last race at Santa Anita on the turf and at today’s distance.

5 – King of Speed – He returns to the turf which may just be the key and has shown in the past that he can win at Del Mar.

6 – Slammed – She has won seven out of nine starts – She has not raced for five months but has several good workouts in preparation for this race.

1 – Midnight Memories – She has won both of her career races; her best dirt speed is fastest among today’s starters, and she has a good 5F workout on July-22nd.

3 – Dance to the Music – She ran 2nd vs tougher in her last race, has the highest last race speed rating and drops in class today.

5 – Grace Adler – She is two for two at Del Mar and drops in class today – She is returning to a sprint is what will help and has a bullet 6F workout on July-22nd.

10 – With This Vow – She has finished in the money in the nine out of the last ten races, winning three of the starts, including the last one at Santa Anita and has a high % winning jockey.

9 – Queen Of the Temple – She has finished in the money in six of seven turf races winning one of the starts and will not have an issue with the distance.

6- Scarabea – She ran 2nd vs tougher in her last race, has the highest last race speed rating, drops in class today and her best turf speed is fastest among today’s starters.

4 – Connie Swingle – She has finished in the money in all six of her career starts, winning four of the races and has the highest last race speed rating – Her best dirt speed is fastest among today’s starters and she has a good 5F workout on July-22nd.

5 – Fun to Dream – She won her debut race at Santa Anita as the heavily bet favorite.

3 – Opening Buzz – She comes in from Golden Gate Fields after breaking her maiden easily.

10 – Oubabe – He finished 2nd vs similar in his last race, his best turf speed is fastest among today’s starters (tie) and he should improve at the shorter distance.

4 – Fore Flag– He finished 6th in his last race after being bumped at the start and has shown he can handle the turf and distance.

9 – Queen’s Code – He closed to finished 2nd in his last two races in sprints and stretches out to a mile.

12 – Kings River Knight – He ran 2nd (on Dirt) in his only start and now tries turf, the breeding suggests he will like the grass and his Dam has 5 winners from 7 starters and 3 Turf winners.

3 – COWBOY CHARLIE – is another that should complete for the lead and 3 good works, including two bullets, since his last race

2 – STREET ART – is 3rd off a layoff, 3rd was slight improvement in only 3 race cycle, 3 works between races

4 – PAINT ME LUCKY – super consistent horse, very little deviation from race to race, he rarely wins but has 4 HQ starts in last five, he’ll make the winner earn it

1 – UNBROKEN STAR – could be the pacesetter if the 3 falters and has the top LP#s by a little, rail was 0-14 during the November meet and the bias looks the same in the first 45 this year

11 – LOOKIN TO EXCEL – LS – got a hunch, some good workouts July 1 & 8, surrounded by maintenance works, so maybe outside speed for tr Jamey Thomas who hits a 22% with 1st time staters, 2nd best of the group behind Baffert

6 – BUTTONWOOD TREE – down in class, tr Jeff Bonde winner 38% down 2+ classes, left arrow, could be on lead, BTN fav last out

1 – CROSS EXAMINE – Bob Baffert and Juna Hernandez, going to likely take money, but Bob is 0-10 with horses making their debut in the MCL ranks.

9 – HIDING THE BRICK – better ATB last out, the other class dropper with the 6, could be better in 3rd after a layoff

7 – REDLINE – BB – I think this is a case of understanding the conditions book and eligibility, just claimed for 75k and won, drops into OC 40, but is not in to be claimed, sneaky. Triner John Sadler winner 3/4 on dropping off the win

6 – ELEVADO – not the biggest fan on maiden risers, but won at 5f with a strong late move, showed speed in debut, gets 1st Lasix, if he puts the EP and LP together with Lasix, lookout and he gets Joe Brave winning at 24% so far

4  IKIGAI – left arrow horse and I just have to put them in there because they may not win, but man ar they competitive, EP#s say he will challenge for the lead and any of his last 3 fit

1 – MIDNIGHT MEMORIES – debut was the best race for any of these, works since last race are outstanding

3 – DANCE TO THE MUSIC – won both of her first starts off the bench, 6 workouts since her last race

5 – GRACE ADLER – Baffert horse that won debut, then G1, then struggled in the next two at G2 and G1, been off since Dec and the last 3 works are blazing

2 – NEVER FOR MONEY – left arrow horse, PC with EP#s that should put her close to the front

10 – WITH THIS VOW – EP+ advantage, could run easy fractions, the only question is can she handle the distance

1 – ALMOST A FACTOR – should be better in her second start after more than a year in the barn, better ATB in 1st start

7 – DUVET DAY – has a lot of variation in performances but been consistent in fresh starts, has a lot of upside and downside

5 – FUN TO DREAM – smoked a field of 7 in her debut at the 3/5 favorite, a string of good works for Baffert

3 – OPENING BUZZ – won her GG debut by 7, should be close to the pace but had the top LP#s by a decent margin

1 – THREECARDMONTE – maybe I am nuts but, the debut race was one of the better 1st starts for any in the field, 3rd best in my view behind top 2 picks, he could be better in R2 and improve on the stretch out and going to get paid if it plays out

12 – KINGS RIVER KNIGHT – Chris P says he plays maidens that finished 2nd in their last race and it’s his favorite angle, this guy finished 2nd last out in his debut along with the 9 & 10 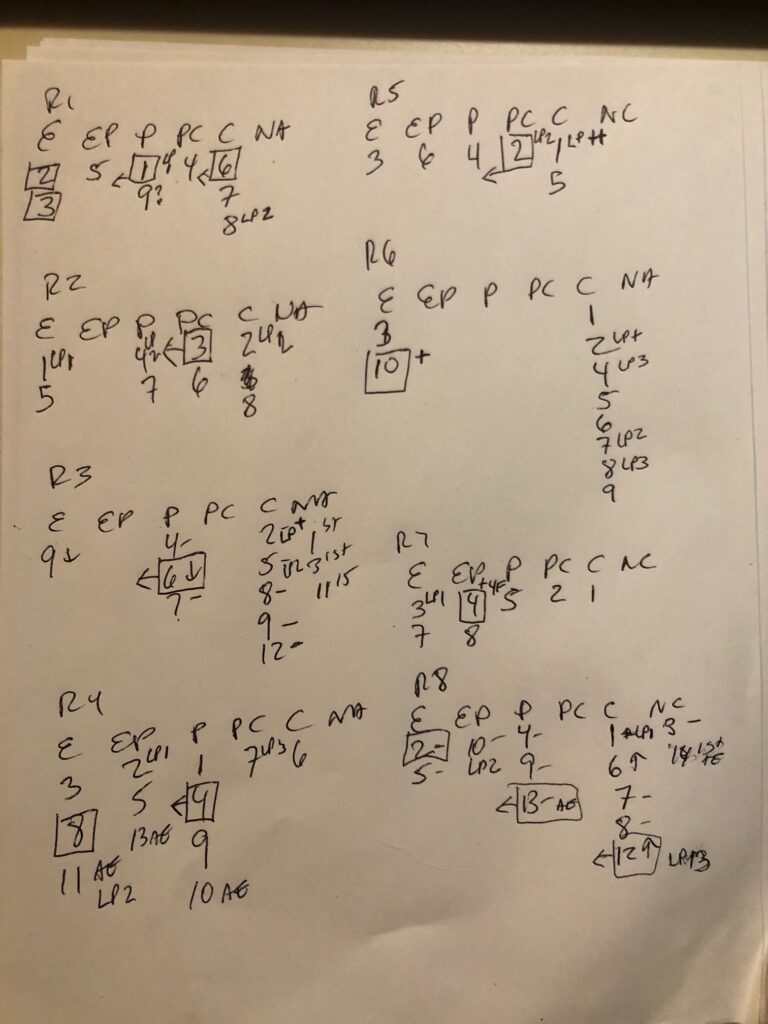