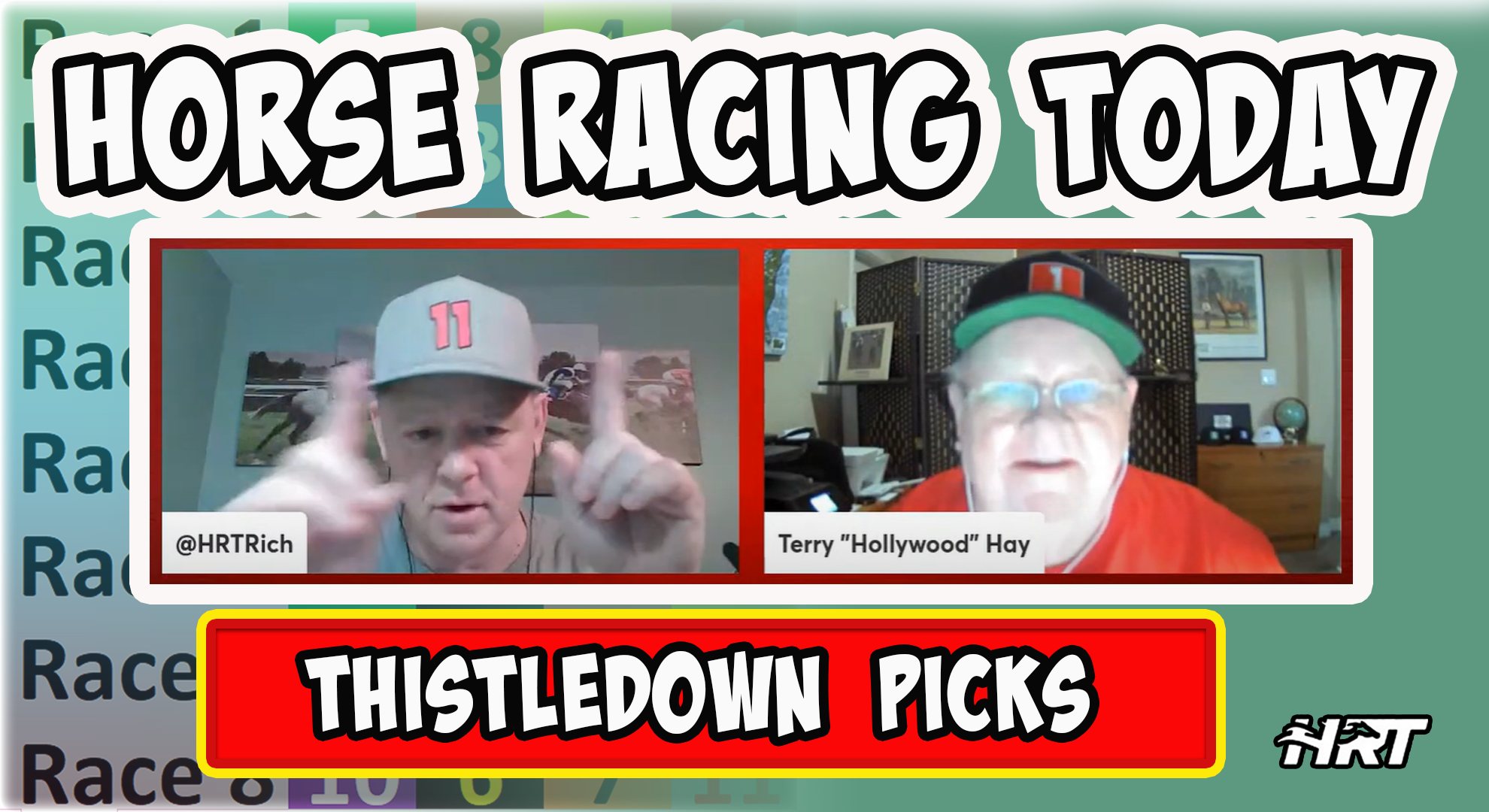 1 – Queenofcatniphill – She has been off for more than 2-months after finishing 7th on a muddy track – She takes a major drop-in class today, has a bullet 3F workout on 18Apr Tdn (d) 3f ft :36¨ H 1/14 and should improve while returning to a sprint.

2 – Easy Eyes – She closed from mid-pack to just miss winning by a nose and received the highest last race speed rating.

5 – Black Kettle – She showed early speed in her last race but faded at the end after fast fractions, drops in class today, has the highest speed figure at today’s distance and her best dirt speed is fastest among today’s starters – The trainer/jockey combo who in the last 14 days has this record (8 3-0-2).

4 – Lilac Lace – She took off for 3-1/2 months and in her first race back she showed early speed before fading to 4th. She has the highest speed figure at today’s distance, and she has a couple good workouts for her return.

4 – Corresponder – She tried a mile in her last race and finished in 4th place, now she should improve while returning to a sprint and has the highest speed figure at today’s distance – The trainer wins 75% of the time when Lasix is used for the 2nd time.

6 – Exceeding – She takes a major drop-in class today and the trainer wins 36% of the time when going from a Maiden race to maiden claiming races.

7 – Kiki’s Lulu Rose – She took 2-months off and came back fresh and ran 3rd vs similar in her last race – The trainer wins 19% of the time in sprints races.

1 – Voodooism–She has finished in the money in four of her last five races. She has the highest last race speed rating and a trainer who wins 25% of the time in Maiden Claiming races.

5 – Off to the Races – He showed early speed in his last race but faded in the last ½ furlong and now he comes back fresh after a break and enters a race that is only 5-1/2 furlongs.

3 – Cry Macho – He comes in from Gulfstream where he improved his speed rating in each of the last three races, received the highest last race speed rating, his best dirt speed is the fastest among today’s starters and adding Blinkers may help.

4 – Drinksonthebeach – He is another horse coming in from Gulfstream where he showed early speed in distance races and now cuts back to a shorter distance – He enters this race with a decent workout of 15Apr Tdn (d) 4f ft :49.4 H 7/20.

2 – Happy Bee – She has finished in the money in six of her last six races, winning three – She has a trainer who wins 17% of the time when going from a sprint to a route.

3 – Maliced – She won her last two races in a row, now going for a hat trick, she has a lot of speed loves going to the front and I don’t see much speed in this race to pressure her – She also has the highest last race speed rating, and the trainer wins 29% of the time when bringing a winner of their last race to compete again.

5 – Little Matilda – Not sure what happened in the last race, but she may have just felt like not running, she has had a good workout on 19Apr Mvr 5f sy 1:01.4B ½ and trainer wins 20% of the time when bringing a beaten favorite back to race again. She is a horse for the course winning six out of eleven starts here.

4 – Backsplash – Like Happy Bee she has finished in the money in six of her last six races, but the difference is she only won one of the races. She does have the highest speed figure at today’s distance.

6 – Ohio Cause – He won his last race at Mahoning Valley at today’s distance, his best dirt speed is the fastest among today’s starters and he has a trainer who wins 29% of the time when bringing the winner of their last race to run again.

4 – Gone in a Flash – He ran a disappointing race in his last start on an off track which he apparently doesn’t like. The bad news is that it may rain, and the track could be sloppy. Who knows he may like a sloppy track verses a muddy track? Prior to the last race he had a win and a 3rd.

3 – Sweet Outlook – She finished 3rd in the last race on a muddy track after getting off slow and was tight on the rail – She has several good workouts in a row including two bullet works in March.

2 – Sushi Q – She has run 2nd in her only race on a muddy track at today’s distance. and today may be the same conditions so she may do well again.

1 – Miss Ellie – She has plenty of early speed and her early speed running style will help her chances – She finished 3rd vs similar in last race and may improve with Lasix added.

8 – Florenzia – She won her debut race at today’s distance and received the highest last race speed rating (tie) and was well bet in debut.

5 – Purity – She showed plenty of speed leading most of the way and then finished 3rd on an all-weather track vs tougher, she can improve at the shorter distance and returning to dirt may be just what she needs – She drops in class today and has a trainer who wins 29% of the time when bringing a horse back after being 90+ days away.

3 – Lewd – She finished in the money in her last two races finishing 3rd vs similar in last race. She has a perfect record at Thistledown winning the only start she has had here.

1 – Rosa’s Soul –She has finished in the money in five of her last seven starts, winning one of the races – She ran a nice 2nd in her last race and can do some of the same here at the 5-1/2-furlong distance.

6 – Tale of Lacey – He is looking for his first win of 2022 as he has finished 2nd in his last four races, earned the highest last race speed rating, has the highest speed figure at today’s distance and his best dirt speed is fastest among today’s starters.

5 – Giv’em the Biz – He finished 3rd vs similar in last race as the favorite, but the trainer wins 37% of the time when bringing back a beaten favorite to race again and his early speed running style helps his chances.

1 – Quimby – He has finished in the money in four out of his five career races winning the last one.

8 – Foreign – He broke first in all but one of his last ten races and lately has the stamina to finish 1st or 2nd. He likes this track, and the distance will not be a problem.

2 – EASY EYES – ran better 6f number last out on mud, missing by a nose as the favorite w/ TLRSP#

4 – LILAC LACE – is a horse for the course with three wins in four races, just one win in nine elsewhere

5 – OFF TO THE RACES – should be close to the front all the way around the track,

3 – MALICED – won her last two and they weren’t close. Recent resume says she should be as good in her third after a layoff

1 – BAD KARMA – faced may of these in her last six starts, is usually in the mix early and ITM at the end

6 – OHIO CAUSE – won his last with 3rd SP# increases, much better final time in last by 3 seconds

2 – MASTEROFTHEHOUNDS – is probably the most consistent horse in the field, not a lot of upside, but maybe the highest floor

6 – SORORITY SISTER – been of since early December, has 22f works since March 10, should be fit and ready to run

2 – SUSHI Q – had a decent debut and could take a step forward in her second start, one of a trio of 4 yod vs 3 yos

9 – BIRDIE’S CHANTZ – has two starts at TDN with a second and third, had some serious issues in last that could lead players to overlook based off finish

5 – PURITY – class drop, track drop from Turfway Park, has the top EP#s by a decent margin

6 – TALE OF LACEY – much better fractions last out, a maintenance work since. ITM 10/13 at the distance

5 – GIV’EM THE BIZ – missed as the public’s choice in his last, trainer Michael Rone rebounds at 38% the next time out with beaten favorites

2 – QUIET AMIGO – tough call over the 1, but prefer horse with experience at this level and some of the EP#s for this group