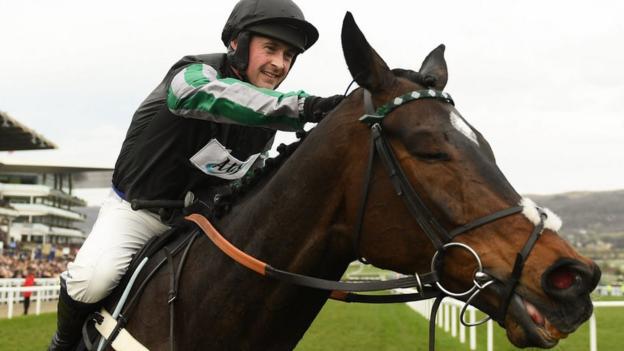 The star-studded nature of Nicky Henderson’s string based at historic Seven Barrows stables outside Lambourn, Berkshire is further emphasised on Tingle Creek day at Sandown.

For the third weekend running, a Henderson big-player is centre stage for the Saturday feature, this time reigning Queen Mother Champion Chaser Altior in a glittering staging of the Tingle Creek Chase, the first Grade One-race target for top notchers in the fast and furious two-mile chasing division.

The Patricia Pugh-owned eight year old, unbeaten in all of his 14 races from 14 starts over jumps, is a warm order to emulate the stable’s dual Champion Hurdler Buveur D’Air – who swept aside all-comers in the Fighting Fifth Hurdle at Newcastle on 1 December – and thus to further erase memories of talented stablemate Might Bite’s emphatic defeat at Haydock in late November.

The competition in the Tingle Creek – named after a big-jumping 1970s chaser who relished tearing around the Sandown course at breakneck speeds – is, however, shaping up into a definite examination – I hesitate to call it a ‘mini’ Champion Chase (though it obviously is) because this race is a prestige prize in its own right.

Willie Mullins sends spectacular Un De Sceaux, a former winner, over from his Irish base with jockey Ruby Walsh riding; Sceau Royal arrives off the back of a very solid success in November; and upwardly mobile Saint Calvados has a reputation as ‘one to watch out for’ in these type of races.

“Altior’s been brilliant at home,” said Henderson, “watching him schooling has been absolutely terrifying – he’s been brutal over the fences – and I don’t think [jockey] Nico [de Boinville] had ever been so fast in all his life.

“After Buveur D’Air went to Newcastle and everything went well, the nerves un-jangled a bit after Might Bite, but these are very big days for us.”

When it comes to brilliant, accurate and charismatic two-mile chasers the Henderson-trained Sprinter Sacre – winner of this in 2012 – is perhaps the greatest of recent years.

However – and whisper it for now – while Altior still maybe has a bit of work to do to come level with ‘Sprinter’ my goodness he is making ground; extending his unbeaten record here against such fine opponents will only accelerate that process.

The Grand National fences are back in use for the Randox Health Becher Chase (13:30 GMT) and the Betway Grand Sefton Chase (15:15) with some familiar Aintree names – four legged and two – in action.

Blaklion, trained by Nigel Twiston-Davies and ridden by his jockey-son Sam, looks to repeat his authoritative Becher Chase success of 2017.

Just as importantly perhaps, the nine-year-old, who finished fourth when favourite for the Grand National before last, looks to make up for the disappointment of being brought down at the very first fence in the most recent staging of the famous steeplechase in April.

Gordon Elliott, who won that day with Tiger Roll, is expected to saddle two in the Becher Chase, both of them back following long absences: Don Poli after a near 22-month lay-off and Noble Endeavor (20 months). With Vieux Lion Rouge and Highland Lodge also taking part in the Becher Chase – run over about two-thirds of the Grand National course – the last three winners will all be re-opposing.

And everyone is up against Ultragold, who has positively skipped around Becher’s Brook, Valentines and co. to be victorious in the last two Topham Trophys at the big fixture in April.

The most intriguing runner of the day at Aintree is perhaps the 2017 Grand National winner One For Arthur who is returning in the Betway Many Clouds Chase (14:05).

The popular nine-year-old, owned by the ‘Golf Widows’, Deborah Thomson and Belinda McClung, as an alternative hobby to their partners’ passion, is racing for the first time since being nursed back to fitness by trainer Lucinda Russell after a leg injury. Tom Scudamore replaces the laid-up Derek Fox in the saddle.

Young chaser Lalor – I think most people are happy with the pronunciation Law-lor, as in the popular Irish-originating surname – is expected to attempt to continue his ascending curve in the Henry VIII Novices Chase (13:50).

I’ve never entirely got to the bottom of why Henry gets this name check at Sandown: though he hunted in the area, I’ve always preferred the suggestion that when the race needed a name way-back an official couldn’t come up with a good one until, while helping his son with his history homework, having a Geronimo moment.

Coverage of both Sandown and Aintree – including commentary on the Tingle Creek Chase (15:00) – on BBC 5 Live on Saturday, 8 December