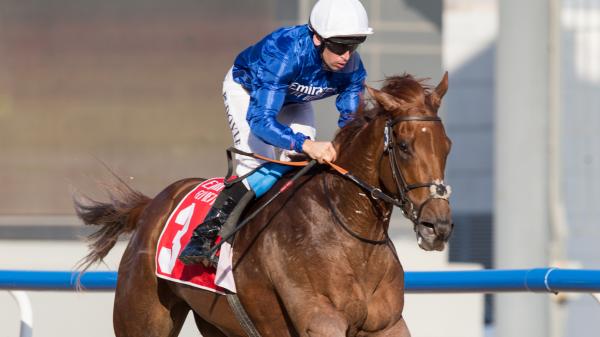 Attention, racing fans! Be sure to wake up early on Saturday, March 30, and turn your focus to Meydan Racecourse in Dubai, where the Thoroughbred races on the action-packed Dubai World Cup card will be getting underway at 8:15 a.m. Eastern.

One of the most noteworthy races of the morning (or evening if you’re in Dubai) is the $2 million Group 2 UAE Derby, a 1 3/16-mile Road to the Kentucky Derby prep race offering 100 qualification points to the winner. The race has produced a Kentucky Derby presented by Woodford Reserve starter in six of the last seven years, and with 14 horses lined up to contest Saturday’s renewal of the race, it seems likely that we’ll see another Derby starter or two in action.

Godolphin Racing has won this race a record eight times and could very well secure a ninth victory with their filly #6 Divine Image, who has emerged as the betting favorite after beating males by 7 ¼ lengths over this track and distance in the Al Bastakiya Stakes three weeks ago. Trained by Charlie Appleby, this daughter of Scat Daddy is 3-for-4 so far, and her lone defeat came when she broke very slowly and had to launch a long, sustained rally to finish second in the UAE 1,000 Guineas. She’s improved noticeably since stretching out to 1 3/16 miles and has also shown more early speed as of late.

I’m mentioning Divine Image’s tactical speed because that can be a major asset at Meydan, which has a tendency to favor front-runners and horses racing on or near the rail. And while Divine Image should be able to secure a decent early position, I wonder if the speedier #1 Walking Thunder can use his exceptional tactical speed to post a mild upset.

Earlier this year, Walking Thunder was the hype horse in Dubai. The son of Violence won his first three starts in unchallenged fashion by a combined 18 ¾ lengths, including a nine-length romp in the UAE 2,000 Guineas Trial. But then Walking Thunder got squeezed out of a forwardly-placed position in the UAE 2,000 Guineas itself and responded negatively to having dirt kicked in his face; as a result, he wound up racing off the pace and very wide, often a disadvantageous trip at Meydan. Under the circumstances, he actually ran well to rally and finish clearly second-best, but he was no match in the homestretch for Godolphin’s capable Estihdaaf, who secured the lead (and the rail) to prevail in gate-to-wire fashion by 5 ½ lengths.

Walking Thunder has been rested a bit since that Feb. 7 test, and when he returns in the UAE Derby he’ll be ridden for the first time by legendary jockey Frankie Dettori. Drawing post one should afford him the opportunity to work out a perfect trip setting the pace while racing inside, and in my opinion that might be all he needs to rebound with a winning effort.

So how do we play this race? The UAE Derby field is so deep and competitive that I don’t recommend getting too involved in exotic wagers like the trifecta—there are just too many options to consider. For example, #2 Jahbath has won four straight over synthetic tracks in Great Britain and looks like a talented colt, but he’s making his dirt debut. #5 Derma Louvre was among the best 2-year-olds on dirt in Japan last year, but he was soundly beaten when third in the Hyacinth Stakes last month and it’s difficult to analyze how he stacks up against this international field. #11 Van Beethoven hails from the barn of the three-time UAE Derby-winning trainer Aidan O’Brien, but has looked more like a sprinter than a router so far and has been soundly beaten in his last four starts. And while the American colts #4 Plus Que Parfait, #8 Gray Magician, and #12 Stubbins figure to attract support from U.S. bettors, they haven’t been among the best in the U.S. to date and could find themselves overmatched here, though Stubbins at least has early speed and could be a factor on the front end.

If you’re playing on a small budget, I encourage you to simply bet Walking Thunder to win—he should be a fair price in the wagering. But if you want to go a little bigger, I suggest that you also key him in the exacta with Divine Image, Jahbath, and Derma Louvre.

Wagering Strategy on a $10 Budget

Wagering Strategy on a $25 Budget