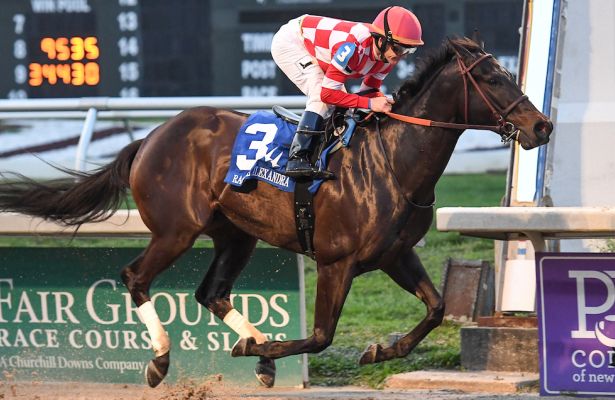 Thirty-four fillies who raced in the 1 1/16-mile Ashland have won the Kentucky Oaks at Churchill Downs, including three of the past four Oaks winners: champion Monomoy Girl (2018), Cathryn Sophia (2016) and Lovely Maria (2015).

The 1 1/16-mile Ashland awards 100 points to the winner on the Road to the Kentucky Oaks. The next three finishers receive 40 points, 20 points and 10 points, respectively.

Click here for a list of the 99 Ashland nominees, and click here for their past performances. Post positions for the Ashland and the $1 million Blue Grass (G2), a major prep race for the Kentucky Derby (G1) also being run April 6, will be drawn Wednesday, April 3.

The Ashland and Blue Grass are part of Keeneland’s spectacular 11-race card on April 6 that will present five graded stakes worth $2.25 million. The Ashland is the ninth race with a 5:45 p.m. ET post followed by the Blue Grass at 6:23 p.m.

Serengeti Empress, who has 60 points to top the Road to the Kentucky Oaks leaderboard, is a graduate of two Keeneland sales. She sold for $25,000 as a weanling at the 2016 November Breeding Stock Sale and was purchased by Politi for $70,000 as a yearling at the 2017 September Sale.

Last year, Serengeti Empress won the Ellis Park Debutante before taking the Pocahontas (G2) at Churchill. She made her 3-year-old debut in the Feb. 16 Rachel Alexandra at Fair Grounds for trainer Tom Amoss.

Jaywalk, who has 30 points on the Road to the Kentucky Oaks, sold to trainer John Servis, agent, for $190,000 at the 2017 September Sale. Last year, the daughter of Cross Traffic won the White Clay Creek Stakes at Delaware Park before capturing the Frizette (G1) at Belmont and Tito’s Handmade Vodka Breeders’ Cup Juvenile Fillies (G1) at Churchill.

Jaywalk is expected to make her 2019 debut in Saturday’s Davona Dale (G2) at Gulfstream.

Co-owner Cash is King won the 2016 Ashland with Cathryn Sophia.

The next 12 leading point earners on the Road to the Kentucky Oaks also are nominated to the  as well. Kiaran McLaughlin leads all trainers by nominees to the Ashland, with eight. He won the race in 2008 with Little Belle.

The late nomination period for the race Wednesday, March 20.