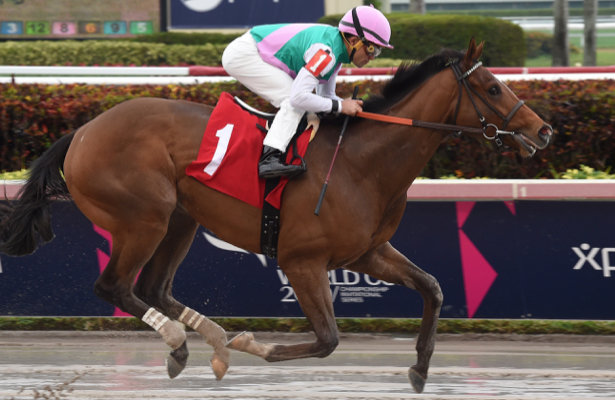 Welcome to Horse Racing Nation’s Kentucky Derby Daily, which will each day leading up to the May 4 race at Churchill Downs detail all the news and notes related to contenders in one convenient space.

Before drawing conclusions upon the workout you see below, consider these comments from Bruno De Julio, who makes a living clocking, rating and analyzing morning training for his brunowiththeworks.com.

“To me, it doesn’t matter if they put them online,” De Julio said Friday afternoon when told there’s new video available of Hidden Scroll, who commanded Kentucky Derby 2019 buzz (along with a 104 Beyer Speed Figure) after romping in his Jan. 26 unveiling at Gulfstream Park.

Before deeming a work good or bad based on video only, De Julio says all of the following warrant consideration: Do you have the context of how the track is playing? How long after a renovation break did the work occur — meaning, is the surface chopped up? And what about other factors, such as moisture in the dirt and wind direction?

So, here goes with a first look at Hidden Scroll since we saw him 14 lengths clear on debut:

In a likely final breeze toward the March 2 Fountain of Youth (G2) back at Gulfstream, Hidden Scroll, the Bill Mott-trained son of Hard Spun, drilled five furlongs in 1:00.40 at the Payson Park Training Center alongside of Tacitus, another Juddmonte Farms colt.

The big question for Hidden Scroll next out: How will he run over a dry track? From the rail over a sloppy, sealed surface, Hidden Scroll dashed to the lead and never looked back first out.

“I think any gambler — any trainer — knows that when they run that big the first time, sometimes there’s a chance of regression the next time out,” Mott told XBTV. “We’re going to go into this next race with five weeks’ rest in between.

“We hope he’s able to recover and have enough time to get everything back where it needs to be and run at least an equally as good race.”

The Fountain of Youth draws Wednesday and is expected to include at least 10, among them Grade 2 winners Signalman and Maximus Mischief.

• Trainer Todd Pletcher, who went into the year without much to speak of on the Derby trail, has yet another horse on our Derby Radar after Spinoff took the road through Tampa Bay Downs previously traveled by Always Dreaming and Magnum Moon.

• Monday’s impressive Cal Cup Derby winner, Galilean, will next target the Rebel Stakes (G2), continuing the game of musical chairs ongoing with some of the West Coast’s top Derby prospects.

In case you missed it…