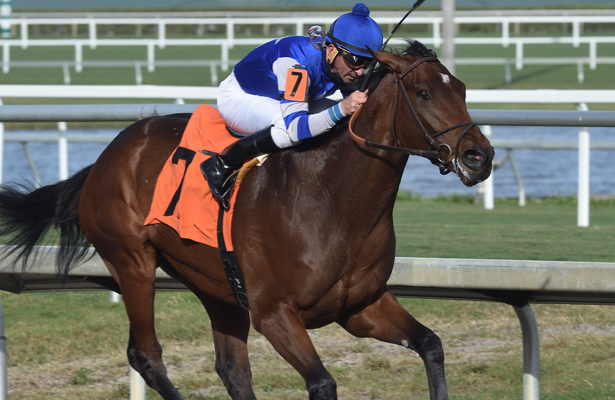 The 2019 Kentucky Derby is a party that members of the Albaugh Family Stable don’t want to miss. But to qualify a horse and continue its streak of Derby contenders, it’ll take a different sort of approach this season.

The last three years, each of Brody’s Cause, J Boys Echo and Free Drop Billy picked up points as juveniles, including with a pair of scores in Keeneland’s Breeders’ Futurity (G1). But neither in an Albaugh duo pointing to upcoming prep starts are yet on the leaderboard.

“We keep saying four in a row would be amazing,” said Jason Loutsch, racing manager for father-in-law Dennis Albaugh, a billionaire who founded the Albaugh Inc. agricultural chemical company. “Once you get a taste of it and you get three in a row, it would be a major letdown (to not go). Every year, that’s our goal.

“We’ve got a lot of work to do. We know we’re a little late to the dance this year, and it’s a different path than we’ve taken before. But it should be fun.”

The road started Friday when Come On Gerry, a $335,000 purchase, broke his maiden at second asking in Gulfstream Park’s seventh race, a maiden special weight at 1 1/16 miles. While the track appeared to be speed-favoring, the son of Elusive Quality set the fractions and finished up well under little urging by trainer Dale Romans’ first call jockey, Robby Albarado.

“That’s what we were hoping to see,” Loutsch said. “His first time out, he ran for half the race and kind of got tired. He’s a big, long horse. We thought he’d love two turns and added distance. It showed. We’re excited about the future with him.”

Come On Gerry, a tribute to Albaugh’s late best friend, is a regular workmate with Admire, another Romans-trained maiden special weight winner whose name is pronounced “add-mire” after a former Iowa sports reporter who now works as the voice of Drake University athletics.

Loutsch said one from the pair will point to Gulfstream Park’s Holy Bull Stakes (G2) and a matchup with unbeaten Maximus Mischief on Feb. 2. The other will likely run in a points-paying Derby prep at Oaklawn Park or Fair Grounds.

In addition to that pair, back in training after a freshening is Mr. Ankeny, who was sixth in this year’s Breeders’ Futurity (G1) and could head down a similar Derby prep path as his stablemates.