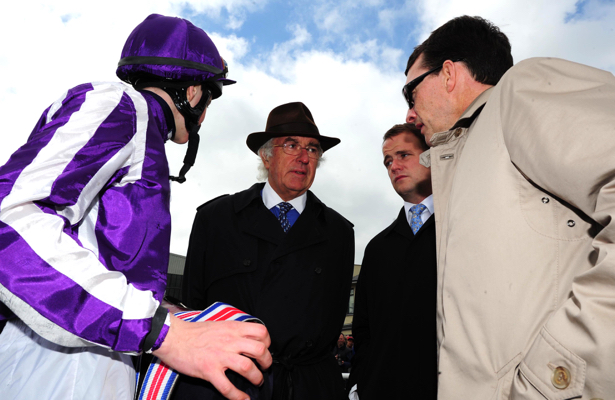 Trainer Aidan O’Brien could look to replicate Mendelssohn’s path in targeting the 2019 Kentucky Derby starting Friday when Europe’s road to Churchill Downs continues with the Patton Stakes, run over the synthetic and under the lights at Ireland’s Dundalk Stadium.

Mendelssohn won the Patton a season ago, then went on to take the UAE Derby (G2) in impressive style before entering the Derby one of the race’s top choices. This time, O’Brien has three of eight runners declared for the one-mile, listed stakes.

From the rail, Van Beethoven, to be ridden by Donnacha O’Brien, and Albuquerque, with Jamie Heffernan up from the second stall, are both nominated to the March 30 UAE Derby.

Also like Mendelssohn, Van Beethoven is a son of Scat Daddy campaigned by the Coolmore connections of Derrick Smith, Mrs John Magnier and Michael Tabor. This one is less accomplished having won two of eight starts between April and September 2018.

Albuquerque, by Galileo, isn’t Triple Crown-nominated, but could always surface as worthy of a late payment toward running in the spring classics. The fellow Coolmore runner won the second of his two starts, both of them on turf with the most recent in October.

One other runner to watch in the Patton field is Western Australia, a son of Australia who will have aboard O’Brien’s first call rider, Ryan Moore. He is Triple Crown-nominated, but not for Dubai, setting up the colt to perhaps continue on Europe’s qualifying path.

Four previous European qualifiers were all run on turf, whereas these final three are on synthetic. No horse has accumulated more than 10 points, making this an open chase for one guaranteed spot in the starting gate, similar to Japan’s Kentucky Derby trail.

Post time for Friday’s Patton is 2:45 p.m. ET and, courtesy of Brisnet, free past performances are available. The race can be viewed on most Advanced Deposit Wagering services in the U.S.