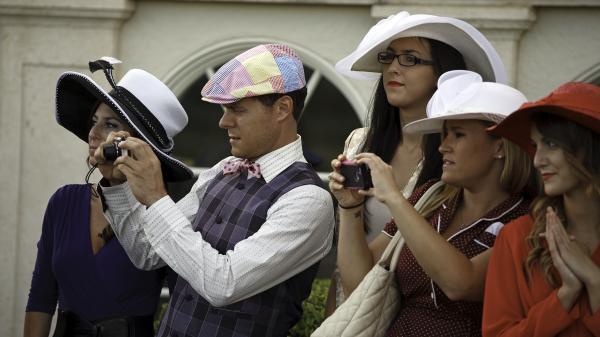 With the Breeders’ Cup World Championships finished, the horse racing calendar flips back to day one to start its most anticipated season: Kentucky Derby season. The road to the 2020 Kentucky Derby Presented by Woodford Reserve will, as it always does, take plenty of unexpected twists and turns as contenders rise and fall with each passing prep race. The action picks up immediately with the turn of the calendar, as the $150,000 Jerome Stakes at Aqueduct on New Year’s Day features one of the top two future-book contenders for Derby 2020 in Independence Hall.

Forecasting the 20-horse field – and even taking an early stand on a potential winner backed by a future wager – is an annual highlight of Derby season, and the bookmakers at William Hill have started taking fixed-odds future wagers on Derby 146, which will be held May 2, 2020.

As in years past, in this blog we’ll take a periodic look at William Hill’s future-book odds for the Kentucky Derby and profile some of the contenders.

Anneau d’Or: This colt gained national attention in his second career start on Nov. 2, when he shipped south from Golden Gate Fields (site of his maiden win in September) and nearly won the TVG Breeders’ Cup Juvenile at Santa Anita Park. He outran his 28-1 odds in the Juvenile, to say the least, but came up a head short to fellow longshot Storm the Court. That start was his first on dirt, and it made him the favorite in the Grade 2 Los Alamitos Futurity on Dec. 7. Anneau d’Or just missed once again, losing by a neck to highly regarded Bob Baffert-trained Thousand Words (offered at 16-1 odds by William Hill and profiled in the last edition of this blog). Still, Anneau d’Or is ensconced in the upper echelon of Kentucky Derby contenders heading into 2020, and if all goes well will give Bay Area-based trainer Blaine Wright his second consecutive contender on the Kentucky Derby trail after Anothertwistafate last spring. He’s got a decent route pedigree, by very good sire Medaglia d’Oro and out of a dam (mother) sired by another top stallion in Tapit. Anneau d’Or’s dam won a Grade 3 race at Arlington International Racecourse going 1 3/16 miles on turf. The colt is offered at 24-1 odds on William Hill’s latest sheet.

Lynn’s Map and Mr. Monomoy: This pair finished 1-2 in an eagerly anticipated allowance optional claiming race on Dec. 21 at Fair Grounds that lived up to its billing. Brad Cox-trained Mr. Monomoy, the runner-up by a head, is actually getting more support on William Hill’s book at odds of 60-1, while Lynn’s Map, trained by Mark Casse, is offered at 100-1 odds as of Dec. 29. Mr. Monomoy veered out at the start of the one mile and 70-yard, two-turn race, mildly affecting Lynn’s Map, who broke right outside of him and from the outside ninth post position. Mr. Monomoy and Lynn’s Map settled through the backstretch in second and third, respectively, and Mr. Monomoy took the lead in midstretch against a stubborn pacesetter. Lynn’s Map closed resolutely to get up in time, but both colts looked impressive and should get more chances to compete in the upcoming Fair Grounds series of Derby preps, starting with the Lecomte Stakes on Jan. 18. They each posted maiden wins during Churchill Downs’ November meet and have similar pace-pressing running styles that are advantageous for route races. The overall pedigree edge goes to Mr. Monomoy, however, as his name suggests. The colt, sired by 2013 Belmont Stakes winner Palace Malice, is a half-brother (same dam, different sire) to 2018 champion 3-year-old filly and Longines Breeders’ Cup Distaff winner Monomoy Girl.

Three Technique: This colt returned after a two-month break to post an impressive 4 ½-length victory in a seven-furlong allowance optional claiming race at Aqueduct on Nov. 20 to gain a spot in the top tier of New York-based 2020 Kentucky Derby contenders. He debuted at Belmont Park and then raced at Saratoga two times during the summer to start his career, finishing second twice (the second time to eventual Runhappy Hopeful Stakes winner Basin, currently 65-1 at William Hill) before breaking his maiden by 5 ½ lengths on Aug. 31. Trained by Jeremiah Englehart for August Dawn Farm, the racing operation of former NFL coach Bill Parcells, Three Technique returned to the worktab for the first time since his allowance win with a three-furlong breeze at Oaklawn Park on Dec. 27. He’s pointed toward the Jan. 24 Smarty Jones Stakes at Oaklawn, a qualifying points race for the 2020 Derby. Three Technique’s pedigree is an intriguing question mark with regards to the Triple Crown series, as he’s out of the first crop of Mr Speaker, a turf horse who took the 1 ¼-mile 2014 Belmont Derby Invitational and also won that year’s 1 1/16-mile Coolmore Lexington Stakes on Keeneland’s then-Polytrack main track. Mr Speaker is a son of Pulpit, from the A.P. Indy sire line that is renowned for producing elite classic-distance dirt horses. On his dam’s side of the pedigree, Three Technique is a half-brother to gelding Stan the Man, who has won twice in 2019 racing 1 1/8 miles on dirt, including the recent Queens County Stakes. Three Technique is currently offered by William Hill at odds of 40-1.

Upcoming Stakes Race: As noted above, the Jerome Stakes on Jan. 1 is the first Kentucky Derby prep race of the new year. The one-mile Jerome offers qualifying points on a 10-4-2-1 basis to the top four finishers, and the 2020 renewal drew a field of seven. For a horse-by-horse analysis of the Jerome by Bob Ehalt, click here. For a betting strategy from Keeler Johnson, click here.

2. Inside Risk (not offered)