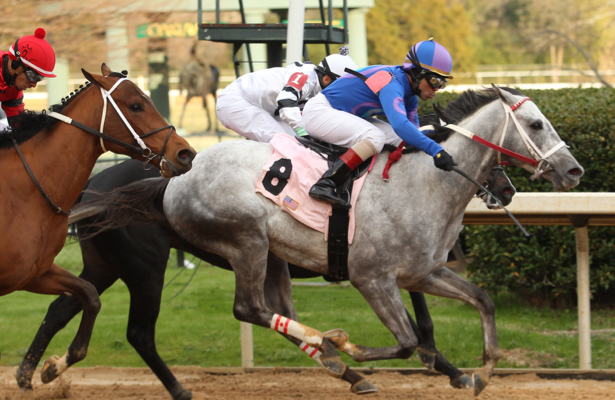 Given an easy lead and short home stretch, Gray Attempt took them all the way Friday in the $150,000 Smarty Jones Stakes, collecting his first points toward the 2019 Kentucky Derby on opening day at Oaklawn Park.

Jockey Shaun Bridgmohan guided the son of Graydar from the outside post over to the rail into the first turn, and from there Gray Attempt clicked off fractions of 23.12 and 46.86, leaving just enough in reserve to hit the wire a neck ahead of Long Range Toddy.

“He left there like we thought he would,” trainer Jinks Fires said of the winner.

The final time was 1:36.94 with the race ending at Oaklawn’s alternate finish line before the traditional wire.

The 1-2 finishers entered off prior stakes wins with Gray Attempt a winner of Fair Grounds’ Sugar Bowl Stakes and Long Range Toddy the Springboard Mile.

Dwight Pruett-owned Gray Attempt was making his two turn debut. Easing the transition to a longer race was the scratch of Jack Van Berg — the horse, conditioned by the late trainer’s son, Tom — who figured to play a part in the pace and had drawn the No. 9 post just outside of Gray Attempt.

Boldor ran third and Six Shooter fourth. Bankit, bet down to favoritism after a narrow second to Long Range Toddy in the Springboard Mile, didn’t show the same late kick and missed the board.

“Obviously, I’m disappointed as heck in Bankit, but Long Range Toddy and Boldor both ran solid,” said trainer Steve Asmussen, who saddled three. “Kind of a merry-go round race. They went in :46 and change fractions. That’s pretty solid, but nobody changed any positions. First day of the meet, things will change. We’ll see what happens.”

Fires recorded his second Smarty Jones win — Discreetness came first in 2016 — after Gray Attempt held off pressure from Boldor to his outside entering the turn and Long Range Toddy coming up the rail in the stretch.

“We’re staying right here and if everything goes well,” Fires said, “we’ll go in the Southwest.”