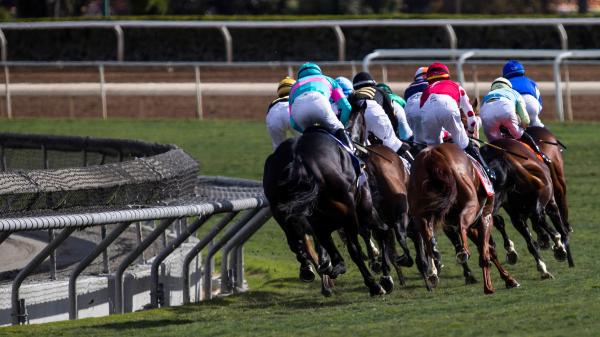 Many of the major United States track owners and racing associations have combined resources in a collaborative effort to bring meaningful improvements to safety of horses and humans who compete in Thoroughbred racing.

At the Keeneland library Nov. 19, those industry leaders announced the formation of the Thoroughbred Safety Coalition, which includes Churchill Downs Inc., the New York Racing Association, The Stronach Group, Del Mar, Keeneland, and Breeders’ Cup. Coalition representatives outlined plans to create and implement significant medication, operational, and integrity guidelines to ensure and improve the well-being of horses and riders.

Drew Fleming, president and CEO of Breeders’ Cup, said the goal is to create the safest environment possible for equine and human participants.

“We’re here today because we recognize that responsibility and the need to be honest, transparent, and accountable,” Fleming said. “While each of our individual organizations has prioritized the well-being of our athletes, we know that more must be done. We believe that coming together and leveraging our collective resources, and establishing a leadership position, will help our industry as a whole as we address the public concerns about safety and welfare. Addressing those concerns head-on is in the best interest of our athletes and our sport.”

Fleming later added, “We know we need to get this right.”

The coalition launch follows a winter-spring meet at Santa Anita Park that saw a rash of catastrophic breakdowns, which put added focus on equine safety issues. Keeneland vice president and chief operating officer Vince Gabbert said the group has been working together to form the new coalition since the spring.

While coalition members acknowledged some ideas are still taking shape, they immediately committed to working toward uniformity on three key therapeutic medication issues: non-steroidal anti-inflammatory medicines, corticosteroids, and bisphosphonates. Equine vet Will Farmer outlined the medication standards, some of which already are in place at some member tracks and some of which will mean changes for tracks.

The 48-hour standard for NSAIDs would be a longer withdrawal time than currently called for by the National Uniform Medication Program for NSAIDs like phenylbutazone, and ketoprofen, which are at 24 hours; as well as flunixin, at 32 hours. NUMP recognizes six corticosteroids and provides withdrawal guidelines ranging from 48 hours to seven days; the coalition’s 14-day withdrawal standard would see those withdrawal times at least doubled.

While those are the current standards on the books, the industry has been moving fast this year. California already has updated its rules — in line with the coalition — and a number of other state regulators are working in that direction on the therapeutic medications. Farmer said the coalition will work to ensure that the guidelines become the industry standard.

“Therapeutic medication is a necessary part of health for horses, humans, and our beloved pets. However, in the racing environment, we must make sure that these medications are not misused or overused, intentionally or otherwise,” Farmer said. “I applaud this group’s efforts in attacking medication and testing standards head-on.”

While the coalition does not currently have representation from a horsemen’s group, coalition members said other like-minded industry groups are welcome to join. Mike Rogers, president of racing for The Stronach Group, noted the track owner has worked with horsemen’s groups, the Jockeys’ Guild, and other industry groups to bring about changes in California and he anticipates a similar approach from the coalition.

“We want to bring them to the table and be a part of this change,” Rogers said. “Otherwise it’s going to be a challenge. We absolutely want to bring in everybody.”

The coalition figures to carry weight with regulators as it represents many of the signature tracks throughout the U.S. Besides its flagship Louisville track, Churchill Downs Inc. also owns Fair Grounds Race Course & Slots in Louisiana, Arlington International Race Course in Illinois, Presque Isle Downs in Pennsylvania, and Turfway Park in Kentucky. The Stronach Group owns Golden Gate Fields and Santa Anita in California, Gulfstream Park in Florida, and the Maryland Jockey Club (Laurel Park and Pimlico Race Course). NYRA has Aqueduct Racetrack, Belmont Park, and Saratoga Race Course while Del Mar and Keeneland have their namesake tracks.

The coalition will account for all three Triple Crown races and about 85% of the graded stakes in the country. Breeders’ Cup accounts for the annual World Championships event. The 14 tracks represented are in California, Florida, Illinois, Kentucky, Louisiana, Maryland, and Pennsylvania. Gabbert believes that reach will carry weight when the coalition asks regulators for any changes.

While each race day tracks throughout the U.S. compete for horses and wagering dollars, the coalition members said they all have the same interest in providing as safe an environment as possible for horses and humans competing in the sport. They believe joining forces on this issue will facilitate progress.

“Acting together as one voice is needed,” Rogers said. “I think on most of these points we have consensus; there’s a few we still have to work through. But working together as an industry is needed — horses ship from one jurisdiction to another. This opportunity to work together with all of the major stakeholders and try to improve uniformity I think is long overdue.

Those reforms will go beyond medication issues to address best practices in operational standards including the adoption of voided-claim rules, requiring daily reporting by vets to regulatory officials, increased out-of-competition testing of horses, adoption of a uniform riding-crop rule, and mandating necropsies of horses who suffer catastrophic injury or illness.

The coalition also will work toward operational standards requiring an electronic reporting system of veterinary records and centralized database, the collection of racing surface data that can be merged into existing databases, the standardization of jockey health and wellness protocols, development of a proficiency system for exercise riders, the addition of a safety steward in all jurisdictions, and the establishment of cross-functional safety committees at all tracks.

“These reforms are vitally important for our industry,” said Churchill Downs racetrack president Kevin Flanery. “What is just as important as we plan and implement our plan is that we tell the millions of fans throughout the country who love the Thoroughbred and love Thoroughbred racing what we’re committed to doing and how we’re making our sport safer.”

In April all of the track coalition members, as well as a number of other tracks, also announced plans to change race-day Lasix policy that will prohibit its use by 2-year-olds beginning in 2020 and eliminate the use of Lasix in stakes races held at their racetracks beginning in 2021. Race-day Lasix was not a point of emphasis at Tuesday’s press conference.

Also Tuesday, the coalition didn’t take a position on the Horseracing Integrity Act of 2019 — federal legislation that would see the United States Anti-Doping Association develop and administer medication policies and testing oversight in the sport. Currently racing medication and testing issues, like the sport overall, is regulated at the state level; a setup that has contributed to a lack of uniformity in rules, testing, and standards.

Keeneland president and CEO Bill Thomason, who also serves as chairman of the National Thoroughbred Racing Association, said the coalition can work in concert with the NTRA’s Safety and Integrity Alliance, which since its formation in October 2008 has accredited tracks who have worked toward industry standards.

“There have been some great initiatives that have gone on in this country that our racetracks have implemented and been a part of,” Thomason said. “This is not eliminating those or starting over on all of that good work that’s been done throughout the country. NTRA has significant initiatives and efforts going on right now to provide for the safety of our athletes. We’re going to take those things being done by the good organizations out there and make sure those are discussion points. That builds on what we’re working to have an immediate impact.”

The benefit of the coalition, as compared with some other safety efforts, may be its ability to make more of those efforts a reality across the board. Thomason said the coalition will be well-positioned to coordinate all of the safety efforts out there and put them in place for an immediate impact to earn the public’s trust. He said it makes sense for tracks to take the lead and he’s confident there will be changes that produce results.

“This is a start; we have to get to things that are going to be impactful,” Thomason said. “This is not about providing a public relations campaign; it’s about enacting meaningful reforms.”

Thomason said as the industry makes changes, those changes will be evaluated to see if they’re working or not. He said the time for cooperation is now.

“In order for us to be successful as an industry, we cannot do it independently; we have to do it together. There are moments in history where that becomes apparent and obvious; that’s where we are in racing in America,” Thomason said. “We are so fortunate to have organizations right now who actually get it. They’re talking with each other, are respectful of each other’s differences but also committed to get past those differences we’ve been fighting over for decades inside this country to come to meaningful reforms and meaningful objectives and meaningful actions with complete transparency. We have a lot of people counting on us and we’re not going to let them down.”

“We’re going to get to the point of knowing every step of these horses from the time that they’re born until the time that they retire and go on to their second careers. This, as much as anything, is providing that level of transparency to our customers, participants, breeders, owners —t he whole deal — to make sure we have all of the pieces in place to provide the safest conditions possible. …This is not a closed group. As people want to come on board, be a part of these initiatives, and help us with this effort; we absolutely welcome that, whether they’re racetrack companies, industry groups, farms, you name it. We feel like the things that we are advocating for and pushing are things that the entire industry should and will get done.”

“Thoroughbred racing is steeped in tradition and we want the sport to live on for generations to come, and that is only possible with all of us working together to ensure that the safety and well-being of our athletes is our top priority.”

“The Thoroughbred Safety Coalition presents an opportunity for the sport to adopt a set of best practices with a unified approach to equine safety. We look forward to advancing these efforts, communicating directly with the public, and broadening the coalition in the coming weeks and months.”

“California racing has embraced progressive reforms over the last several years and we are pleased to join this group today to help push forward similar reforms in other jurisdictions in the U.S. It is critically important that we work together to create the highest levels of safety, integrity, and accountability at our tracks and it is also our responsibility to more proactively help the public understand the extensive steps we take to promote a safer environment for our human and equine athletes.”

“The Thoroughbred horse racing industry has reached a watershed moment where unprecedented reforms touching all areas of the sport must continue to be advanced and implemented. The Thoroughbred Safety Coalition represents a step toward greater accountability and transparency to put horse and rider safety and care at the forefront.”