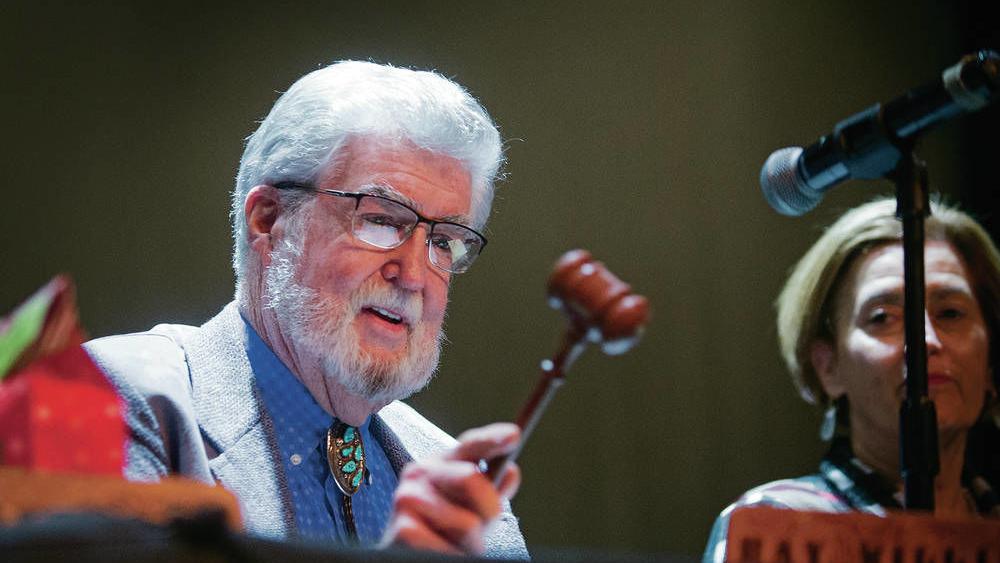 ALBUQUERQUE — The New Mexico Racing Commission on Thursday postponed a decision on issuing a license for a new horse-racing track, raising the possibility that the administration of Gov. Susana Martinez won’t have time to hand out the lucrative license before she leaves office at year’s end.

That would put the commission’s decision — which has been shaded by friendships, business ties and political connections — in the hands of the next governor, Michelle Lujan Grisham.

A top deputy to state Attorney General Hector Balderas recommended the postponement because of a legal challenge filed by Hidalgo Downs, one of five companies competing to build New Mexico’s sixth track and slot machine casino.

In a petition filed last week in state District Court in Albuquerque, Hidalgo Downs and its partners argued a feasibility study conducted for the commission was flawed and asked a judge to order that a new one be prepared.

The study found the track and casino proposed by Hidalgo Downs for Lordsburg would produce far less slot machine revenues and state taxes than tracks and casinos proposed for Tucumcari and the Clovis area.

The study, conducted by a New Orleans group, also found that a track and casino in Lordsburg would siphon off the most gaming revenues from existing tracks and casinos.

The Racing Commission, after hearings over several months, was scheduled to decide Thursday whether to issue a new license and, if so, which of the competing companies would get it. Three companies want to build in the Clovis area and one each in Tucumcari and Lordsburg.

The commission decision to postpone any decision was yet another sign of the enormous stakes in the licensing process and the possibility that those who don’t get the license could pursue legal challenges. A new track and casino would produce hundreds of millions of dollars in slot machine winnings for its owner.

In considering the issue, the Racing Commission has had to face the connections of those competing for the license, as well as those opposing a sixth track and casino.

Commission Chairman Ray Willis has owned racehorses with two partners in one company seeking the license. At least three of the other four commissioners also have been involved in racing.

The state’s five existing tracks and casinos oppose a new so-called racino. They have cited an overall decline in the racing industry, a reduction in the number of New Mexico-bred horses and a projected drop in their casino revenues if new competition is allowed.

At least three of the companies seeking the new license have deep political ties to Martinez, a Republican, but some competitors also have been major supporters of Lujan Grisham, a Democrat.

Once she takes office, Lujan Grisham could move through her appointments to the Racing Commission to continue the licensing process, start it over again or scuttle it all together.

Chief Deputy Attorney General Tania Maestas, who has been advising the Racing Commission on the process of licensing a new racino, recommended the commission postpone its decision until the Hidalgo Downs litigation is resolved. Maestas said the postponement will ensure a fair and impartial decision.

The Racing Commission, without discussion, voted unanimously to accept the recommendation. The vote followed a two-hour closed-door meeting of the commission.

Maestas said the Attorney General’s Office has until late December to file a court response to the petition by Hidalgo Downs but will do so sooner. She also said the office will ask for an expedited resolution of the case.

There was no court order in place blocking the Racing Commission from deciding on the new track license, and Maestas said it could have voted to issue the license.

A spokesman for the Attorney General’s Office said the agency “will continue to work with the Racing Commission as they resolve the threat of pending litigation to ensure integrity in their awarding of the state’s sixth racing license.”

Dozens of people, including representatives of the five companies competing for the license, attended the commission meeting.

Those who objected to the commission’s decision declined to speak on the record because of concern about how commissioners might view any negative comments.

Warren Frost, part of a group seeking to a build a track and casino in Tucumcari, shrugged off the development.

“Another couple months isn’t going to make a bit of difference,” Frost said.

In a statement issued through a spokesman, Full House Resorts of Las Vegas, Nev., which is seeking a license for a track in the Clovis area, said it applauded the Racing Commission’s “prudent path.”

The state’s compact with American Indian gambling tribes allows for a maximum of six racetrack/casinos. In exchange for limiting off-reservation gambling, the state gets a share of the tribes’ slot machine revenues.

The Racing Commission first issued the license for the sixth such operation in 2008 to a group that planned to build a track and casino in Raton. That project collapsed two years later following repeated construction delays and persistent questions about financing.

The commission, citing new inquiries, announced in May that it was again accepting applications for the license. The commission held several hearings on the license, including presentations in Lordsburg, Tucumcari and Clovis by the competitors.