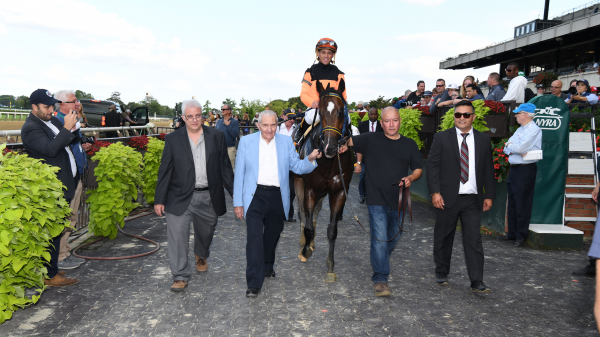 Raymond Mamone entered the horse racing business as an owner in 1976 and won his share, with his greatest successes coming in relatively inexpensive stakes. Although he waited 42 years for a Grade 1 winner to come along in Imperial Hint, he sure knows how to handle a high-caliber horse.

It was at Mamone’s urging that trainer Luis Carvajal Jr., ran Imperial Hint in the July 27 Alfred G. Vanderbilt Handicap at Saratoga Race Course. The horse Carvajal calls the “Little Rocket” had used the Vanderbilt the year before to present the aging owner with the Grade 1 triumph he had coveted for more than four decades.

Now, Mamone wanted very much to run back in that race. Carvajal did not.

Carvajal had identified much easier spots for Imperial Hint’s return from a layoff following the 6-year-old’s journey halfway around the world to Dubai, where he finished third in the March 30 Dubai Golden Shaheen at Meydan Racecourse. Carvajal also was concerned because the diminutive son of Imperialism had missed a couple of workouts due to extreme heat and rainy weather at New Jersey’s Monmouth Park, their home base.

Mamone, who turns 87 on Oct. 4, was insistent on seeking a repeat in the Vanderbilt even though the field was headlined by Mitole, a burner then riding a seven-race winning streak.

The trainer relented. Mamone is, after all, the boss.

“I’m his trainer and I’m his friend but Mr. Mamone pays the bills. It’s his horse,” Carvajal said. “He was working good, training good. He wanted to run back in the Vanderbilt and he was right.”

The “Little Rocket” provided one of the most memorable performances this season. He turned on the afterburners as he and regular rider Javier Castellano sped to a four-length victory and tore through six furlongs in a track-record time of 1:07.92. Spanish Riddle (1972) and Speightstown (2004) had shared the previous mark (1:08.04).

“I’m in a trance,” Mamone said of the ride he is enjoying with Imperial Hint. “I can’t believe this all is happening.”

He and Carvajal plan to use the Grade 1 Vosburgh Stakes on Sept. 28 at Belmont Park as a springboard to the $2 million Breeders’ Cup Sprint on Nov. 2 at Santa Anita. Their little horse — approximately 15.1 hands — with the huge heart has finished second and third in the Sprint each of the last two years.

Mamone, born in Brooklyn, N.Y., is accustomed to making much of seemingly little. He purchased modestly bred Imperial Hint privately for $17,500 as a 2-year-old, but his success story goes back much further than that. He quit school at 14 and initially struggled to find his way.

He delivered ice, picked tomatoes, and set pins in a bowling alley as he scrambled for income. He eventually landed a job in auto body repair and developed those skills until he opened his own shop and gradually expanded his business.

It was not long before Mamone got to know Thoroughbreds as well as cars. Despite Imperial Hint’s lack of pedigree and stature, he bought the youngster at what he describes as a “senior-citizen discount” because he and Carvajal loved the way the horse moved.

“He has the heart of a runner and the body of a running back,” Carvajal said.

Carvajal went on, “If you come close to him, yes, he’s not tall. But he has a beautiful head, a beautiful neck muscled up, beautiful shoulders, his back end is strong. He’s well put together. He’s just not tall. If this horse was a little taller, he’s the perfect horse.”

“You’ve got to see this horse when he works,” he said. “He gallops along and you think he’s working slow. He can do 34s (34 seconds and change for three furlongs) without even pushing him.”

The key, of course, is that Imperial Hint be the fastest of the fast when the Sprint, arguably the most demanding of the Breeders’ Cup races, is contested. The race may be a bit more open because 7-year-old Roy H, two-time defending champion, has been battling a foot issue most of this year. It is uncertain whether he will be able to return to defend his title.

Carvajal, eager to grow his 12-horse stable, and Mamone desperately want to win the Sprint.

“I think it would give every small-time trainer and owner a reason to get up in the morning and keep doing it,” said Carvajal, appreciating how rarely horses like Imperial Hint come along.