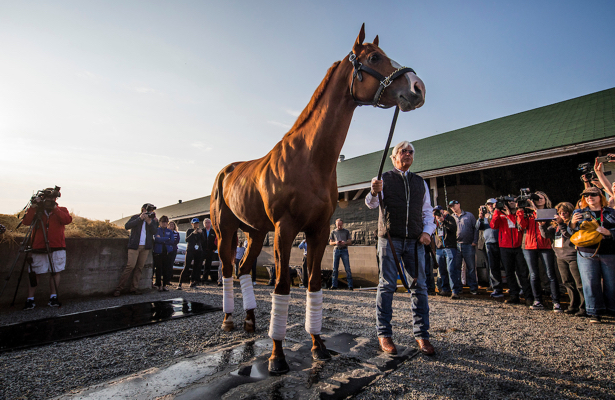 After months of Horse of the Year debate, the moment finally arrived Thursday when Triple Crown winner Justify was crowned at the 48th Eclipse Awards.

The hotly debated Horse of the Year decision led a championship evening at Gulfstream Park.

The Eclipse Awards are voted on by the NTRA, Daily Racing Form and National Turf Writers and Broadcasters. This year, 249 ballots were submitted from a total eligible 271 (91.8%).

Also a Horse of the Year finalist, he became the first horse to sweep all of California’s Grade 1 races for older horses and the Breeders’ Cup Classic in the same season. Running for Hronis Racing, he’s trained by John Sadler.

A champion a year ago as a sprinter, she topped another division in 2018 despite having to retire in the summer due to a minor injury. It’s on to a career as a broodmare after three graded stakes wins in four starts last year.

In a division devoid of a clear leader in 2018, Stormy Liberal became the first grass sprinter to prevail here. The back-to-back Breeders’ Cup Turf Sprint hero finished his season with four consecutive wins. Trained by Peter Miller, he runs for Rockingham Ranch and David Bernsen.

The Chad Brown trainee won four of five starts — all those victories were in Grade 1 company — and finished strong in the Breeders’ Cup Filly & Mare Turf. Leading Peter Brant’s reemergence in the sport, she beat out Enable for this honor.

Other finalists: A Raving Beauty, Enable

This one deserved to be unanimous. The 13th Triple Crown winner won all six of his starts, going from maiden to allowance to a Grade 1 Santa Anita Derby win before the Kentucky Derby. While the chestnut retired after the Belmont Stakes, he did so as a deserving champ.

She wasn’t beaten across the wire in seven starts at age 3, with the only defeat a stewards’ decision in the Cotillion Stakes (G1) at Parx. The Kentucky Oaks winner rebounding to beat older in the Breeders’ Cup Distaff to cap a historic campaign.

Also the 2017 champion, his back-to-back scores in the Breeders’ Cup Sprint led to this repeat for the Peter Miller-trained son of More Than Ready. After consecutive mid-season defeats, he got good again at the right time, prepping with a Santa Anita Sprint Championship (G1) score.

Trainer Mark Casse spotted the late developing 3-year-old in some difficult spots to end the season, and she responded with victories in Keeneland’s Raven Run (G2) before an upset in the Breeders’ Cup Filly & Mare Sprint secured the Eclipse for the Conrad Farms runner.

After a defeat on debut, this daughter of Cross Traffic won her next four races in succession, capping the campaign with a Breeders’ Cup Juvenile Fillies score. The John Servis trainee is owned by D. J. Stable and Cash Is King LLC.

A shoe-in for the Eclipse, this Candy Ride colt won all four of his starts in 2018, the last three of those all in Grade 1 company. The early Kentucky Derby favorite earned that title with a commanding Breeders’ Cup Juvenile win last out. Bob Baffert trains for Gary and Mary West.