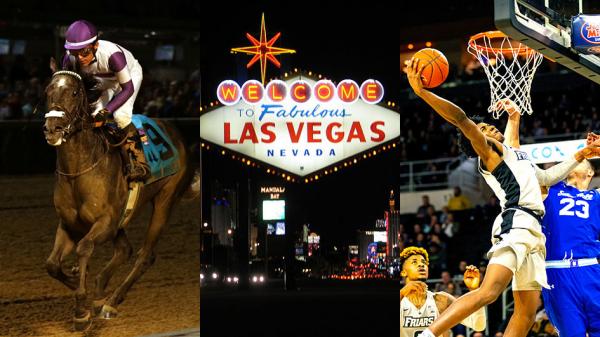 Las Vegas is a great city to visit any time of the year. But if you ask me which of the 12 months I consider best for the horse racing and sports bettors among you, I have to say it’s March.

Vegas rocks and rolls all of the time. But March is a pivotal month in racing and sports in general, thus offering us so many wagering opportunities.

The highest profile sport is easily March Madness for college basketball. It kicks off on Sunday, March 17, when the NCAA tournament selection show airs. After that, you fill out your brackets. Bookmakers release their point spread lines for every game. It truly is madness.

The first week from March 21 through 24, in particular, is a wild circus in our sports books. It is now legendary how many people take time off from work to be in Vegas for this opening week. They will bet every game, or at least try to. And late-game heroics will instantly turn winners into losers and vice versa.

Here is a piece of advice. To avoid the inevitable long betting lines in the sports books, sign up for that book’s mobile sports app and fund it as soon as you arrive. That will allow you to bet from your seat and avoid getting shut out of any game.

Also, it gives you the option of in-game wagering. In-game wagering, to me, is the goose that lays golden eggs part of sports betting.

For example, a typical bet of mine is to keep an eye on a strong favorite who trails early in the game. A team that might be -250 at the start may have become a small underdog, like +125. That’s when I’ll jump in. It’s amazing how often you can find that scenario during a week’s worth of action.

March is also a key month in the NBA and NHL. It’s after the trade deadline. The rosters are set for each team’s run to the playoffs. So, not only can you bet on the individual games which are magnified in importance, but maybe search out some future bets to win the championship.

In baseball, spring training is in full swing. It’s a perfect time to do some homework separating the haves from the have nots. Don’t leave town without a few future book bets to win the World Series.

In horse racing, we tournament players have a big one at The Orleans. The Horseplayer World Series is from March 21 through 23. The first prize in this electric handicapping contest is well north of $300,000.

The Road to the Kentucky Derby Presented by Woodford Reserve explodes as horses get serious about earning enough points to make the field for this year’s run for the roses on May 4.

By the end of March we’ll have a pretty good idea of where the power resides.

Things happen here so fast it’ll make your head spin. One last piece of advice. Bring money and lots of it. I’ve actually seen ATMs run out of cash during March.

Richard Eng is the author of “Betting on Horse Racing for Dummies”, an introductory book for newcomers to the sport of horse racing.  For two decades, he was the turf editor and handicapper for the Las Vegas Review-Journal. He still handicaps the Southern California tracks and his picks are for sale at www.racedaylasvegas.com. You can email him at [email protected] and follow him on Twitter @richeng4propick and on Facebook.com.