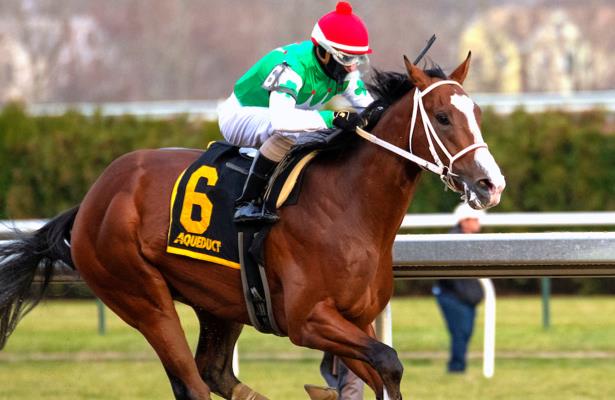 “The horse didn’t breeze too good, so he is out of the Fountain of Youth,” Reid said of the 2019 Kentucky Derby hopeful.

“He just kind of went through the motions. The jockey wasn’t happy with the way he galloped out,” Reid said. “All things considered, we’re going to go back to the drawing board and look for another spot.”

Owned by Cash is King LLC and LC Racing,  Maximus Mischief won the first three races of his career, including a 2 ¼-length victory in the 1 1/8-mile Remsen (G2) at Aqueduct Dec. 1 following a pair of easy wins at Parx.

The Daily Racing Form’s Mike Welsch later reported Maximus Mischief is sidelined indefinitely due to an undisclosed injury coming out of his work.“He didn’t come out of the breeze well,” Reid told Welsch. “We weren’t happy with the way he pulled up and even though he cooled out okay, after going over him with our vet it looks like he’s going to need a substantial amount of time off.”

The 3-year-old son of Into Mischief sustained his first loss while finishing third in the $350,000 Fasig-Tipton Holy Bull (G2) at Gulfstream Feb. 2. Sent to post as the 4-5 favorite, Maximus Mischief pressed the pace into mid-stretch but was out-finished by victorious Harvey Wallbanger and runner-up Everfast.

“He worked in 1:01 and [three-fifths],” trainer Stanley Hough said. “He went in company, but it was a nice, controlled work. We were happy with it.”

It was the second work for Global Campaign since the son of Hall of Famer Curlin, unraced at 2, won a 1 1/16-mile optional claiming allowance by 2 ¼ lengths Feb. 9. Both his victories have come over Gulfstream’s main track.

Hough said the connections are considering both the Fountain of Youth and Tampa Bay Derby (G2) March 9.

“He likes this track and it’s close to home, so we’re leaning toward that way, but we’ll talk it over,” Hough said. “Global worked good and came back good, so I think he’s prepared to go either place. We’re going to see how the week goes and try to do the best thing for us and the horse. As far as the work today, it was very satisfying.”

Also at Palm Meadows, Cash is King and D.J. Stable’s 2018 juvenile filly champion Jaywalk put in a final breeze in preparation for her 3-year-old debut in the $200,000 Davona Dale (G2) on the Fountain of Youth undercard.

Jaywalk went a half-mile for the one-mile Davona Dale, her first race since extending her win streak to four with a 5 ½-length romp in the Breeders’ Cup Juvenile Fillies (G1) Nov. 2. It was her second straight Grade 1 triumph, following the Oct. 7 Frizette Oct. 7 at Belmont Park.

“She worked this morning and went good. Everything went perfect,” Kentucky Derby (G1)-winning trainer John Servis said. “The clockers got her in 50 and [two-fifths]. The race is Saturday so I was just letting her stretch her legs a little bit and put a little wind in her. She came out of it good and looks fine.”

Servis, who won the 2004 Derby and Preakness (G1) with Smarty Jones, won the Davona Dale in 2016 with Cash is King’s Cathryn Sophia, who went on to win the Kentucky Oaks (G1) two starts later.