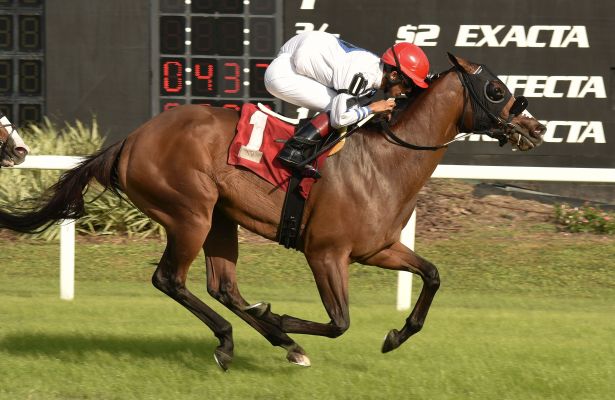 Laurie Plesa’s Miz Mayhem will aim for her fifth stakes victory of 2018 in Saturday’s $100,000 Abundantia at Gulfstream Park, where the Eddie Plesa Jr.-trained 3-year-old filly is slated to meet a full field of 14 fillies and mares.

The homebred daughter of Yesbyjimminy, who will seek her seventh win in her last eight starts in the five-furlong turf sprint, most recently captured the Lightning City Stakes at Tampa Bay Down Dec. 1 with an off-the-pace 1 ¼-length score. Edgard Zayas has the return call aboard the 5-1 third choice in the morning line behind 7-2 Morticia and 4-1 Girls Know Best.

Stronach Stables’ Holy Helena will drop from graded-stakes company for the $75,000 Via Borghese Saturday at Gulfstream Park, where she has won both of her starts over the turf course.

The 2017 Queen’s Plate winner, who captured the Very One (G3) at Gulfstream in March, has made six consecutive starts in graded-stakes company coming into the Via Borghese, most recently finishing third in the Turnback the Alarm (G3) over Aqueduct’s main track Nov. 18.

The James Jerkens-trained 4-year-old filly is rated as the 5-2 morning-line favorite against 12 rivals. Tyler Gaffalione has the mount.

Oak Bluff Stables’ Therapist is rated as the 7-2 morning-line favorite in the $75,000 Tropical Park Derby, which drew a full field of 14 3-year-olds. The Christophe Clement-trained colt won the Cutler Bay at Gulfstream on the 2018 Florida Derby undercard before going on two win back-to-back New York-bred stakes at Belmont and Saratoga.