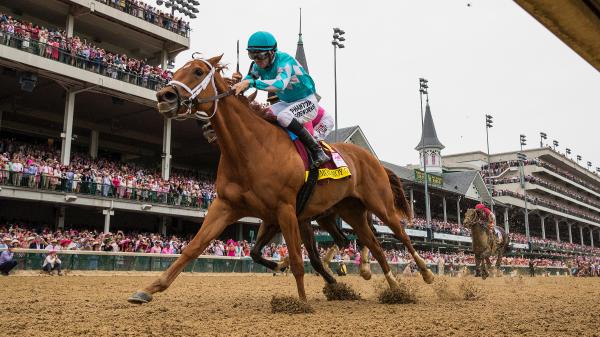 Monomoy Girl, the champion 3-year-old filly of 2018, has been entered for her long-anticipated return and will headline Churchill Downs‘ May 16 opening day card.

One of seven fillies and mares entered in Saturday’s fourth race, an $85,000 one-mile allowance optional claiming event on the main track, Monomoy Girl will be making her first start since winning the 2018 Longines Breeders’ Cup Distaff, which was hosted at Churchill Downs that year. The Tapizar mare, now 5, missed her 4-year-old season due to a bout of colic and a pulled hamstring.

“With a horse like this, you don’t have many options at all, so this probably made the most sense as far as a comeback race. It’s there and I feel like it’s the right distance,” trainer Brad Cox said. “It’s a lot to ask a horse to run off a year and a half layoff regardless of what kind of race you come back in. She’s obviously trained well or else we wouldn’t be running her. We’re happy with how she’s doing and hopefully this leads to bigger and better things throughout the year.”

Campaigned by Michael Dubb, Monomoy Stables, The Elkstone Group, and Bethlehem Stables, Monomoy Girl has won nine of 11 career starts –including five Grade 1 races at 3 – and has two runner-up finishes on her record. In one of those seconds, the Grade 1 Cotillion Stakes, she crossed the wire first but was placed second by the stewards for interference.

The chestnut mare will break from post 2 in her return with her regular jockey Florent Geroux in the irons. Post time is 2:32 p.m. ET. The race will be televised on Fox Sports’ “America’s Day at the Races” on FS1 and also on TVG.

Co-owner Stuart Grant of the Elkstone Group said the partnership was excited to have their champion make her race return on the same day Churchill Downs kicks off its delayed spring meet, even if fans won’t be allowed on track due to the COVID-19 pandemic.

“2018 was a year that you could dream about. She crossed the finish line first in six straight Grade 1s, won the Breeders’ Cup [Distaff] against older horses, and did everything you could have asked for. She was a finalist for Horse of the Year for the Eclipse Awards,” Grant said. “… We had a number of challenges and we thought we had her back twice, then there was a question of, ‘Should we just put her in foal?’ but the team was unanimous to say, ‘No, she is a racemare and just because we lost her 4-year-old year doesn’t mean that she can’t run at 5.’ She has been training lights out, so I and all my partners are really, really excited to have her back. This wound up being a perfect comeback race.”

Monomoy Girl began breezing this year in late February at Fair Grounds and shipped to Keeneland the second half of March, where she fired a string of bullets in April. The 2018 Longines Kentucky Oaks winner breezed five furlongs in :59.40 May 9 on a fast main track at the Lexington oval.

“Her last work was fantastic. Her works all spring have been great,” Cox said. “I feel like we’ve taken her as far as we can take her in the mornings now. We have to step up and see what we’ve got in the afternoon.”

Monomoy Girl is now close to hitting the $3 million mark in earnings, entering Saturday’s race with $2,954,750.

“I think it’s great for racing, having a champion come back off a year and a half layoff,” said bloodstock agent Liz Crow, who purchased Monomoy Girl at the 2016 Keeneland September yearling sale for $100,000. “I don’t know how many times that’s happened in the span of racing. I’m really thankful to the owners because I feel like they easily could have retired her or sold her. If they were money-focused I think they would have, but they love racing and they love to watch their horses run. I’m just very thankful to the owners for bringing her back.”

“One of the complaints that a lot of people have, and I think we agree, is our great horses retire too early, particularly the boys because they go on to be stallions and you don’t get to see some of the great horses race at 4 or 5 or 6 and just show how great and how dominant they could be,” Grant said. “We had an opportunity here to have a champion 3-year-old come back. A lot of times in the jump from 3 to 4 the horse just gets that much better and we’re excited to race her as a 5-year-old and potentially a 6-year-old. To us, this is almost a rebirth, it’s the start of a new venture where we have an incredibly promising 5-year-old and we’re looking for a 5- and 6-year-old season to show how good she is.”